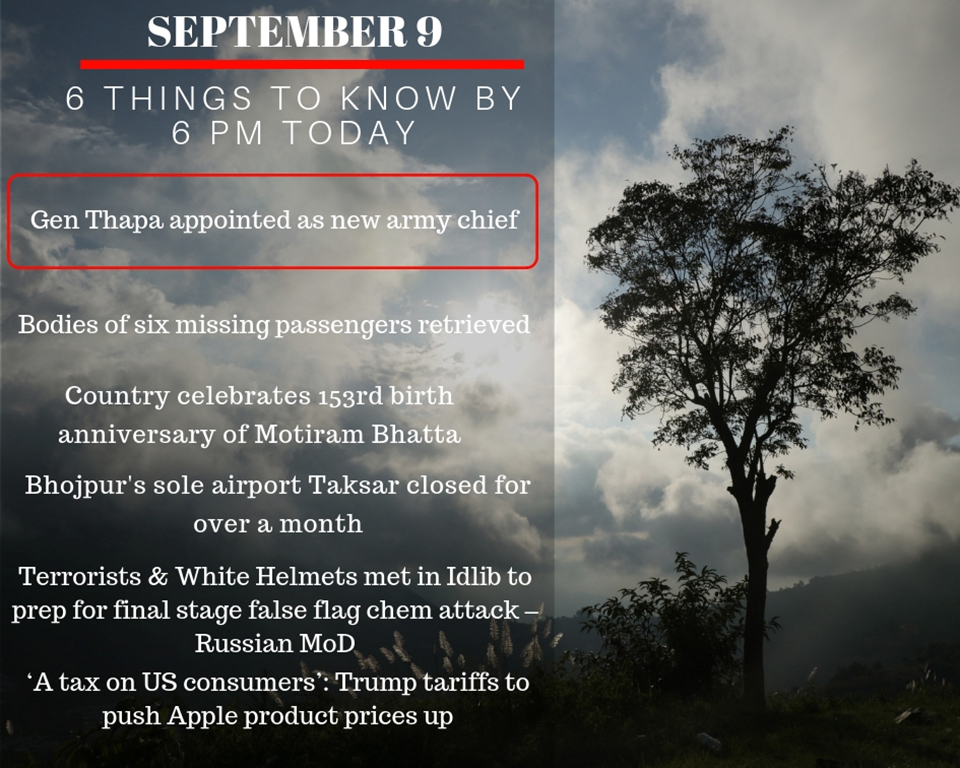 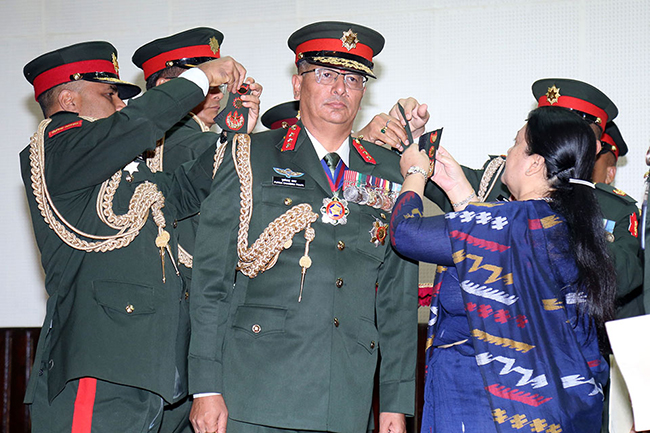 President Bidya Devi Bhandari on Sunday appointed Purna Chandra Thapa as the new Chief of Army Staff on the recommendation of the Council of Ministers.

Bodies of all the six passengers who had gone missing in a boat capsize at Begnas Lake has been recovered. Yesterday, a boat carrying ten passengers had overturned after it lost balance while rescuing a five-year boy, Prachin Paudel. The incident took place at Libdi Tunda side of Begnas Lake in Kaski district on Saturday. 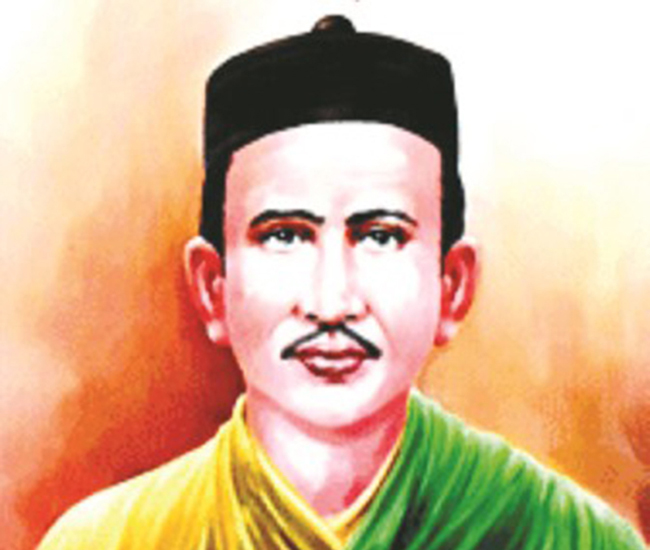 The 153rd birth anniversary of Nepali litterateur Motiram Bhatta, an eminent national personality, is being celebrated across the country. He was the one who introduced "Ghazals" in Nepali literature. His sher "Dui aankhi bhau ta Katar chhan tarbar kina chahiyo, timi aafai malik bhaigayeu sarkar kina chahiyo" is quite famous for the ghazal lovers in Nepal which translate to "Two eyebrows are sharp enough, why there be a need for sword, you happen to be a monarch yourself, why there be a need for vote?"

Taksar Airport, the only one airport in Bhojpur, the district in Province 1, has not witnessed the flight for over the past one month. Under this situation, hospital patients referred to the outside district, those in need of air travel to reach the central capital for emergency purposes, aged and physically weak people have been affected most. 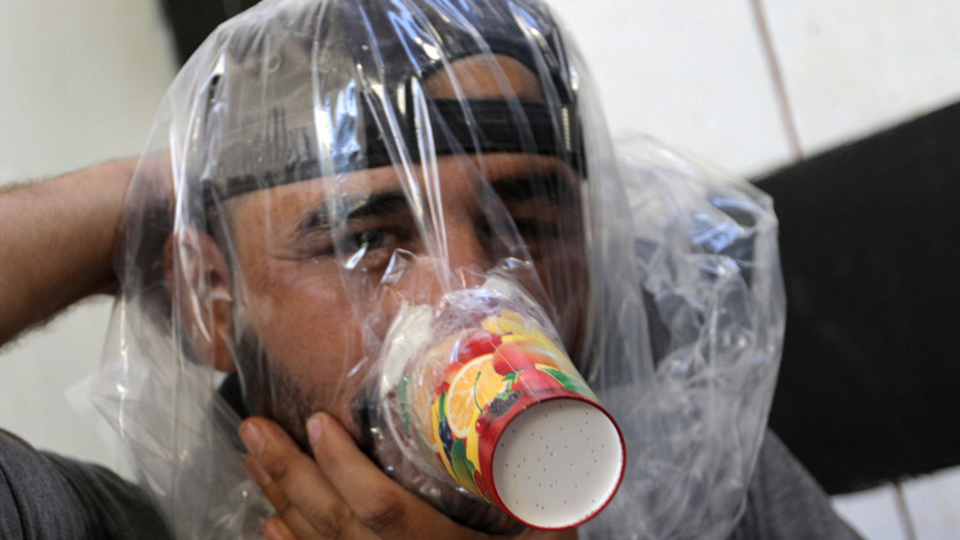 The Russian military has obtained “irrefutable” data that terrorist groups, including Jabhat an-Nusra, and the infamous White Helmets met in Idlib province on Sunday, according to the ministry’s spokesperson Igor Konashenkov. The militants plotted the final scenarios for the chemical attacks that the Syrian army are expected to make in the cities of Jisr ash-Shugur, Serakab, Taftanaz and Sarmin, the Russian military revealed.

‘A tax on US consumers’: Trump tariffs to push Apple product prices up 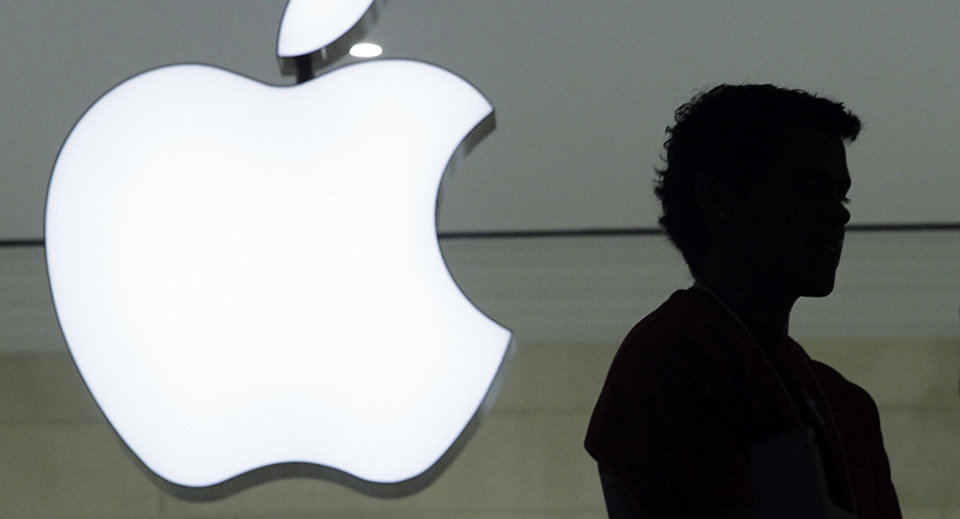 On Saturday, Trump suggested via Twitter that Apple prices could increase due to tariffs the US may impose on China, suggesting that to avoid his tariffs, Apple should simply switch to manufacturing all of its products stateside, instead of in China and other nations

Hidden reasons behind Khokana protests should be uncovered: CoAS Thapa

POKHARA, Sept 10: In 2011, 3 people died while boating in Begnas Lake. They had succumbed to lightning that befell on... Read More...

KATHMANDU, Sept 9: Bodies of all the six passengers who had gone missing in a boat capsize at Begnas Lake... Read More...