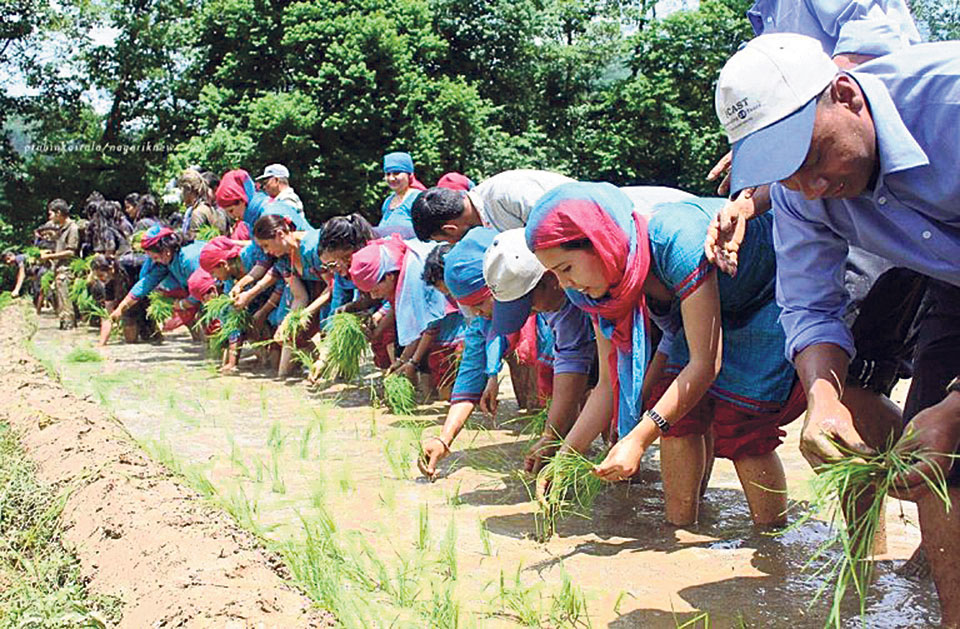 Though Nepal is predominantly an agrarian country in terms of both socio-culture and economic structure, agriculture sector has never been at the top most priority for development

It is more than six decades since Nepal started planning process for development. In six decades, nine five-year plans and five three-year plans have been implemented. In case of agriculture, the first long term plan (Agriculture Perspective Plan) was implemented from 1995 to 2015 and the second one (Agriculture Development Strategy) is at its third year of implementation. The 15th five-year plan (fiscal years 2019-20 to 2023-24), which is at its final stage of preparation, anticipates growing agriculture by 5.6 percent and it will require an investment of Rs 837 billion. However, the contribution of the agriculture sector in the national GDP will go down to 21.9 percent from 27.6 percent of the base year. The 15th plan has also to play a crucial role in food sovereignty in line with Article 36 of the Constitution and ending hunger by 2025.

During past periodic plans, the performance of agriculture remained unsatisfactory due to mainly weak implementation. Growth in agricultural GDP has not only been slow (about three percent), but also highly variable from year to year. The average agriculture growth of the 14th plan was 3.3 percent. During the 15th plan period, agricultural growth should not only accelerate but also has to be more stable. Though Nepal is predominantly an agrarian country in terms of both socio-culture and economic structure, agriculture sector has never been at the top most priority for development. Only two to three percent of total budget used to be allocated for agriculture sector in the past.

The National Development Council (NDC) in April has finalized the 15th five-year plan prepared by National Planning Commission (NPC). It is anticipated that 15th five-year plan will address the government’s vision of ‘Prosperous Nepal, Happy Nepali’. The NPC has set targets to achieve a minimum average economic growth of 9.4 percent per annum in the next five years. The plan will have to face many challenges to achieve them. One of the key issues brought forth by the participants of the NDC was about the role of provincial and local governments in the federal context. The ADS, Nepal’s Constitution, Sustainable Development Goals (SDGs), and present government’s long-term vision seem to be the basis for formulating 15th five-year plan for agriculture (see the table for the targets proposed for production of major crops/commodities).

Given the limited arable land per capita, scattered landholding, difficult terrain, unavailability of year-round irrigation facilities, unreliable supply of seeds and fertilizers, weak research and extension system, poor access to market, and infant agribusiness sector, it is not easier to achieve these targets and more efforts will be required in implementation. More worrying issue is to make agricultural growth sustainable. 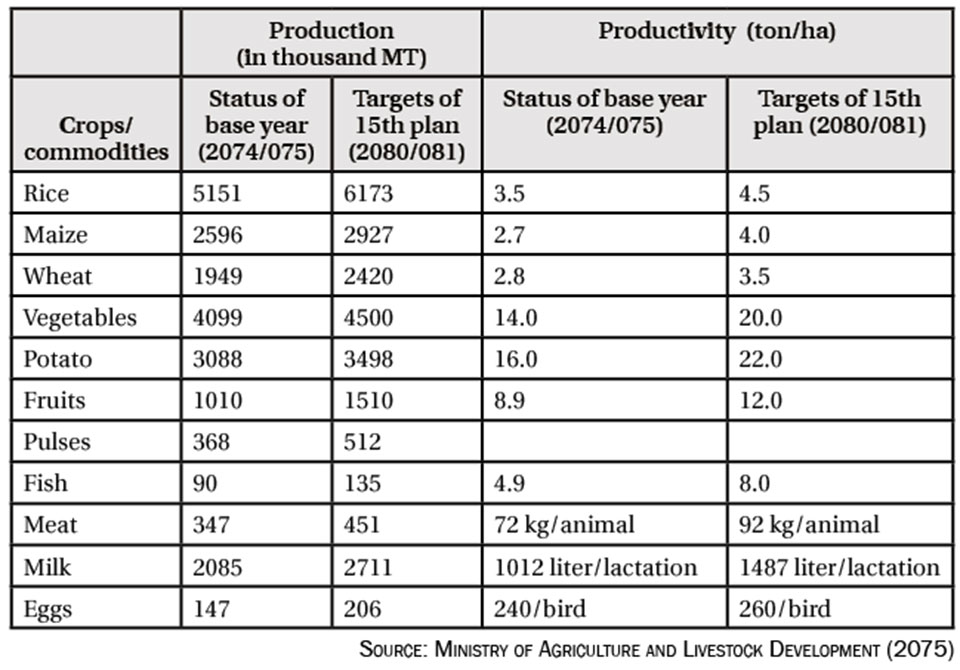 Necessary elements for increasing production are land, labor, technology and services. As agricultural lands are limited and there is no possibility of area expansion, increase in production has to come through increase in productivity. Productivity can be increased only when we use high-technology of production and apply inputs as and when needed. Regarding labor, though around 500,000 workers enter labor markets per year in Nepal, 80 percent of them are absorbed by foreign labor destinations. This indicates that Nepal is already facing labor problem in agriculture and this problem will deepen in the coming years. In order to address this issue, there is no option other than mechanizing agriculture.

Regarding production inputs, irrigation water is the most important one and without it agricultural growth cannot be sustainable. Though the country has abundant water available for irrigation, provision of perennial irrigation based on storage of water in the wet season and release in the dry season is an expensive proposition even in Tarai region. That is the reason a significant part of existing irrigation systems in Nepal is irrigating crops seasonally in a supplementary way. At present only about 20 percent cultivated land is under perennial irrigation. If the above targets of crop production are to be met, we need to have at least 50 percent of the cultivated area under perennial irrigation. It is possible if all ongoing mega irrigation projects like Sikta, Babai and Ranijamar are completed within two to three years and existing projects are run fully and efficiently.

Improve coordination
Similarly, improvements are also necessary on quality seed production and supply. Furthermore, fertilizers are also unavailable in most of the critical periods. Such condition should not repeat if agricultural growth is to be sustainable.

Moreover, the agriculture sector will have to face many challenges under the federal structure. Gaps in available human resource and requirement at the local level, overlapping of some of the responsibilities among federal, provincial and local levels, complicated coordination and increase in the financial burden will be the major ones. Efforts need to be concentrated to restructure and reform different state bodies of agriculture as per the requirement.

In order to commercialize and industrialize agriculture, implementing programs like Prime Minister Agriculture Modernization Project (PMAMP), Livestock Sector Innovation Project (LSIP), High Value Agriculture Production Program (HVAPP), Agro-forestry and Floriculture Promotion Project (AFPP) and construction and operation of large scale cold stores can be the game changers. But how these projects/programs will bring change in commercializing agriculture will depend on their effective implementation. Implementing agencies of these programs are working in traditional way. Pockets, blocks, zones and super-zones are developed in isolation. They are not linked with irrigation and other complementary programs. Coordination mechanisms should, therefore, be made strong and effective at all levels.

A new program called Agriculture Minister Youth Employment Special Program (AMYESP) has been proposed to attract youth in agriculture. But how youths are attracted in this program is not clear. Five crops (large cardamom, zinger, tea, coffee and lentil) are identified as crops for export but there is no special program to increase their production and productivity. Just prefixing the programs with Prime Minister and Minister will not give anticipated outputs. They need to be supported with strong organizations, adequate manpower and sufficient budget.

Amid deepening crisis of Covid-19, scores of opinions have been thrown by various scholars suggesting that the government should employ... Read More...