There is an environment to justify supplementary budget 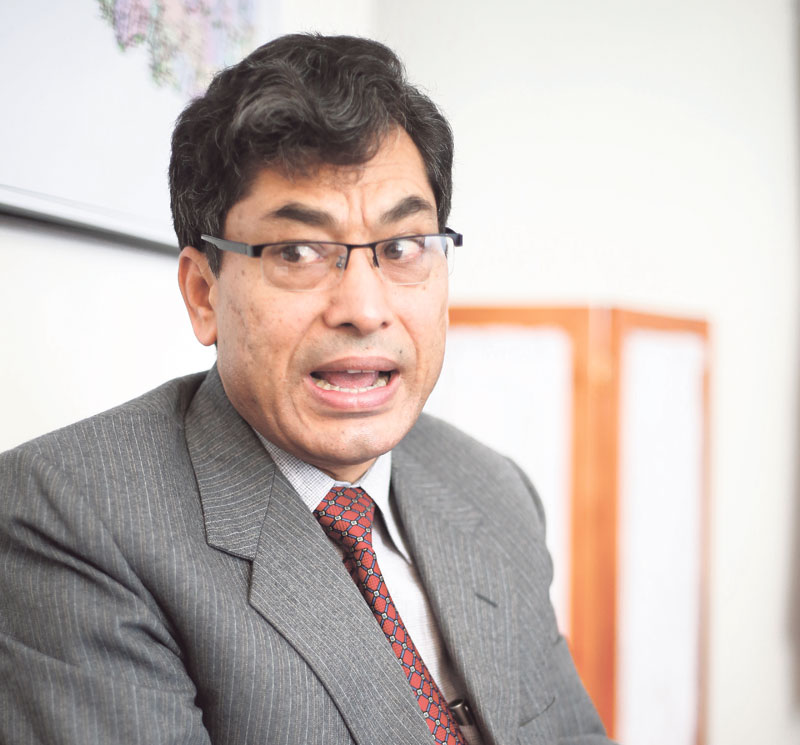 The National Planning Commission (NPC) is the apex advisory body of the government for formulating a national vision, periodic plans and policies for development. It serves as a central agency for monitoring and evaluating development plans, policies and programs. Despite the NPC taking a lead role in the formulation of planning as well as monitoring of development projects, the implementation aspect has remained weak as reflected in the failure to boost capital expenditure. Sagar Ghimire and Laxman Biyogi of Republica talked with Min Bahadur Shrestha, the vice chairman of the NPC, on the problems in project planning and implementation as well as the government plan to bring supplementary budget. Excerpts:

Though it has been many years since the planned development process began in Nepal, the achievement does not seem satisfactory. Many point out flaws in the planning process for the failure in development. What is the reality?
We cannot say that the planning was 100 percent right. But I don't think that the result could not be achieved just due to flaws in the planning process. It is said that a project's success depends 10 percent on planning and remaining 90 percent on its implementation. The problem now is on 90 percent, not in the 10 percent. It might be that the implementation mechanism was overlooked while making plans or it was done differently which resulted into underperformance. The delivery mechanism was either not evaluated properly in the planning process or the competency of such mechanism eventually became weak or eroded. Bureaucracy and private sector are in the delivery system. There have been many problems in the delivery system in recent time. Our bureaucracy lacks competency. There is not energy among government staffers. On the other hand, non-governmental organizations (NGOs) have got roles across the country.

You pointed out delivery system for the failure of projects. But many projects are chosen based on political pressure without doing any feasibility study as such. Isn't it a bad practice?
This is partially true. Though there was political instability in the past decade, there was not any major change in the projects that we have prioritized. National pride projects, airport projects and hydropower projects that we have pursued were not brought haphazardly or under political pressure. They are carried out based on the study on requirement of the country, importance and economic development. The problem is about the failure on implementation or its delay. Every year while preparing budget, political leaders come to us to include their projects like roads, drinking water and other local infrastructures. It is not a problem as we cannot go to the local level to find out projects on our own capacity. They are selected by the political parties, local bodies and national mechanism. NPC selects projects based on their suggestions. However, there are problems sometime when implementing those plans due to land acquisition, forest clearance and other issues.

The progress of many national pride projects is pathetic. Also the government has not been able to increase capital spending. Where do you see the problem?
We have identified some problems. There is a council in the NPC led by the Prime Minister to resolve these problems. The reasons behind the failure to meet the spending target in the past and at present are different. Earlier, the government could not table its budget in time. It would affect the project approval process. This time, the budget was introduced in May and we started giving approvals from-mid August itself. The NPC has already given approval for 90 percent of the projects.  It was said that there was problem in Public Procurement Act and bylaws. We have already amended the act to simplify the procurement process. There were complaints that the Commission for the Investigation of Abuse of Authority (CIAA) has scared people from working. Many, who are lazy and do not want to take risk, has also find it convenient to blame the CIAA. There has been new development and changes in the leadership of the CIAA which will work in the positive direction. We are also urging the CIAA and National Vigilance Center to include the failure of completing the required works by using the authority in the definition of abuse of authority. This does not imply that the execution will be handed over to the CIAA, but they should also play role in encouraging development works. Performance contract and evaluation of project chiefs and secretaries of line ministry will also expedite the projects.

There is a mechanism in the NPC for monitoring of development projects. But many say that the mechanism is lying dormant.

Similarly, there is a separate taskforce under the leadership of NPC vice chairman. This taskforce holds review meeting about the progress on projects, problems and solution for those problems every month. I agree that we are giving less priority to monitoring and evaluation. We will improve it.

NPC vice chairman and members are changed with the change in government. Don't you think that the change of leadership is reflected in overall planning and development process?
The NPC also faces the same impact that the country faces due to frequent changes of the government. But, this does not mean that everything gets spoiled.  Programs and planning are formulated to maintain stability even when there is political instability and change in leadership. Since concerns and suggestions of all political parties are reflected in the planning, it does not make any fundamental changes when there is change in the leadership. The plans and projects initiated by the former Prime Minister Sushil Koirala, were continued by the KP Oli-led government and being continued by the incumbent government.

Kathmandu is nearer to New Delhi than Dhangadi, the far-western city of Nepal, due to lack of proper connectivity. The... Read More...