The story behind 'photo of the year' 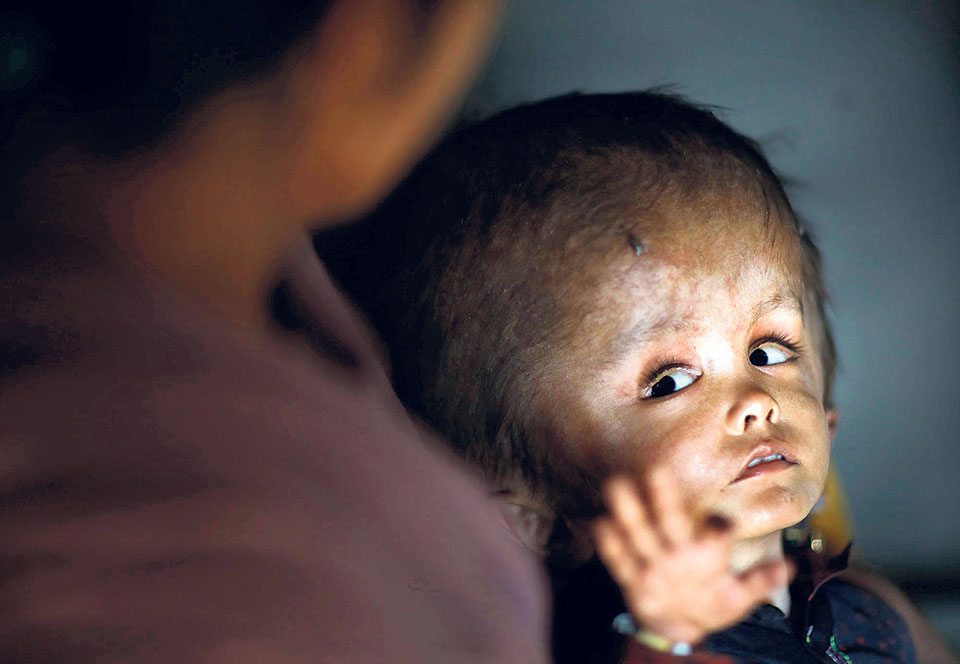 KATHMANDU, Feb 9: A baby with an unusually large head and fragile body lying helplessly in front of a woman, seemingly the baby's mother, caught the attention of a photo journalist Navesh Chitrakar while he was walking past a road in Kathmandu on March 1, last year. The woman apparently from the Madhes community was begging for help. Chitrakar, who is associated with Reuters, introduced himself to the lady, received her contact number and captured the image of the two in his camera.

She was Fulkumari Devi Mishra, whose son Bajarangi Mishra was suffering from hydrocephalus.

For an impactful photo story of Bajrangi, Chitrakar went to the family's house in Rautahat a few weeks later. He clicked photos from different angles featuring the two-year old. According to Chitrakar, he wanted to use those images to garner support for the poor child. But before he could accomplish the mission, he received a sad news. On June 9, the child died.

"I was making efforts to raise funds for his treatment, but I received the news that he has left the world. I rushed to Rautahat with a heavy heart," said Chitrakar. "I had developed emotional attachment with the family and it was very hard to see the tragic situation," he added.

He informed Reuters about the boy's demise. There was a little meaning now, even if he raised funds.

"But there are still two siblings of the boy and the family is very poor. There is a need for help," he said.

In the mean time, Photo Journalist Club called for a photo contest. He submitted the boy's photo and made sure that the awarded money would go to the family if he wins the contest.

On Friday, it was announced that Bajrangi's photo has indeed made it to the top list of the IME-Global–IME Bank Photo Contest 2076.

"His photo where he is waving his hand while giving a sorry look to his mother was declared the photo of the year 2076. It was taken a few months before his death," he said.

"This story is the story of their sorrow, and the prize money will simply go to none other than the family," he added.

Chitrakar is going to provide Rs 130,000 won in the contest to the Mirsha family. And he has already told this to the mother over the phone.

The jury had selected 176 best photos. The photos will be exhibited at Nepal Art Council in Babarmahal from March 1 to 6.

(Note: Republica regrets not verifying the claim made by the PJ Club in a statement that 'the photo was taken before his death' and publishing it on Saturday's edition Republica)

KATHMANDU, Dec 14: Police on Thursday detained Barsha Shah, a photojournalist, from outside the President’s Office at Shital Niwas while... Read More...