Ujwal didn’t want a professional political party like the ones which have been in power for the last thirty years in Nepal, where the only way someone could serve had to go through decades spent on the different rungs of party membership.

The ground shook again, I went running down to the foyer with my mom. Soon after I was in the front yard, he peeked inside the metal gate with his patent sheepish grin. “I have not been able to reach you on the phone, let’s go,” he said. He had come with some other people and seemed set not to take a ‘no’ for an answer this time. This was a few days after April 25, 2015, the day of the deadly Gorkha earthquake. He explained that people were streaming in and calling, wanting to help with whatever they could donate, and we needed to manage it. At this time, the Government of Nepal seemed immobilized like a deer caught in a headlight, and long before the politicos played football in Dashrath Stadium, or PDNA was initiated.

That started another chapter of my life with Ujwal Thapa, overseeing the Bibeksheel Nepali Earthquake relief efforts as the Task Force Chair. I promised him that I would go the next day and observe before committing. Once there, he let me run it the way I saw fit, creating that space, where he and Govinda Narayan, the partner and co-leader on their journey, morphed into supporting roles. Many smart and hardworking people helped Bibeksheel EQ efforts become a success, punching way above its weight, which led to establishing a newer organizational structure for the party. This column would not be enough to write the names of all those who showed that there were two types of people - one who run away from a building on fire, and others who gravitate toward it to put the fire out. Bibeksheel was forged in that crucible, with the vision and space Ujwal created.

This is not hagiography, it is my singular reflection worn by time and sorrow, of a mortal who has transcended into an inspirational icon for many, from my experience. This is however a clarion call for those nabobs of negativism that all may not be well but is not lost either, and there are ways for good and talented people who are not clambering on the ladder of riot and bandha politics. And a deep sadness and regret.

Ujwal was a fellow Budhanilkantha School alumnus, one of the ideal products of the school who was supposed to produce patriots in droves. We often lamented the dearth of graduates in Nepal who had left in pursuit of greener pastures of capacity achievement and economics and pondered why that happened. Yes, I am one of those who sailed, and I don’t have a short answer on why.

During the inaugural iconoclastic campaign for the seat in constituent assembly in 2013 election, I happened to be connected by a close fellow SEBSer- the shorthand of the former Budhanilkantha students, as Ujwal was seeking help to manage the run. He sought me for my past professional experience supporting US political campaigns to help manage an energetic can-do group of young volunteers. We did not win that election battle, but Bibeksheel planted the seeds. Young Ranju Darshana came across us at Narayan Gopal Chowk when we were proclaiming ‘Nepal Khulla Chha’ during one of the interminable Bandha and later joined in our open campaign strategy session. I remember a TV reporter sought my comments thinking I was the ‘dog’- the election symbol, candidate and when I pointed him to Ujwal, he said few words then diverted the camera to me. Later, I told him that he was an unusual candidate and to never shun spotlight when it is on him and is part of the job description of a political leader. He did that half smile and said that he wanted more people to speak that language instead of just him. He was poking my brain - his parlance and creating that space for me should I ever want to clean the dirty pond of politics, which he believed could only be done by jumping inside. I later realized that he had managed similar spaces for Govinda, Milan, Pukar, Santosh- the other ‘dog’ candidates, along with many whose names have rarely been printed. Later, he did the same with Anusha, Ramesh, Biraj, Subuna, Aalok, Karma, Sanjay, Ajeeta and countless others with the torch passed to Milan.

Finally, in May 2017, the local elections were going to happen and Bibeksheel had a candidate. I was puzzled, initially, so asked him that I needed to talk one-on-one with him and Ranju before I came aboard to manage the campaign. Soon after that dining table conversation at my house, it became apparent what a farsighted and out of the box thinking that candidacy was. Lots of people helped, in strategies, and in execution, and the candidate was amazing too, which led to the blow out votes and eventual merger with Sajha party.

He was ahead of the times and was not constrained by the pigeonhole of what defined a competent candidate and politics. Throughout, he was always seeking the cutting-edge approach to ideas, and often borrowed the technological marvel to political leadership. His approach was of servant leadership that cascaded to servant government. 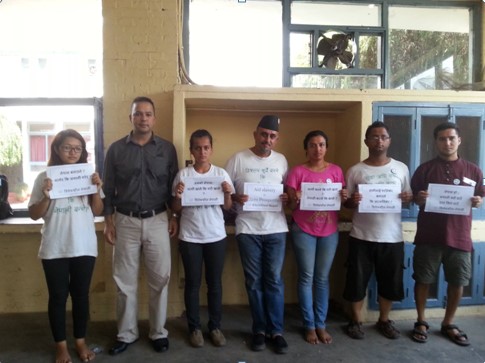 He had that bias for action with fierce urgency of now but never with any shortcuts. Yes, the elections had to be won, but never through the methods of illegal robo sms messaging around the election day that other parties were doing, or shady practices and questionable ethics. One should poke the people’s minds to spur them into action but not by inconveniencing business or non-concerned citizens. He asked for things to speed up but slowly. He wanted to remove the cognitive dissonance of citizens who voted against their interest, by giving them the space for mental resolution despite it not yielding quick short-term results. He did not attract throngs with his oratory, but he had a different playbook. And that playbook is becoming self-evident with his passing.

Ujwal didn’t want a professional political party like the ones which have been in power for the last thirty years in Nepal, where the only way someone could serve had to go through decades spent on the different rungs of party membership. He wanted professionals, who went about their lives but when felt the calling to be able to run for office through Bibeksheel. We discussed how feasible a US style primary system would be for the non-professional politicians to get in the mix. He wanted to carve out a space by providing that platform for those in the organization. He wanted space for bibeksheel people, on the Bibeksheel platform.

There were many other campaigns, but after the local elections in 2017, I was only personally in touch with him occasionally. It helped and didn’t help me not knowing the internal workings of the party politics through the merger and breakup with Sajha party, and yet he sought many people like me to bounce back on ideas. I could talk with him in personal terms that few in his circle could, say things that others shied away from but now my regret is that I couldn’t do more for him and by extension to the Bibeksheel Party. Thinking back, he trusted me completely. Now that he is gone, I doubt I will ever be involved with a cause of Nepali political party. Ujwal was personal for me. I don’t recall him looking at me and saying thank you directly, just like I never did to him for what he did.

Around mid-2019, and this was after we had not met in a long time, and I had stepped out of the hairdresser that both of us had apparently been serviced by, someone bear-grabbed me from behind in the street of Maharajgunj. I couldn’t move my hands. He was wont to do that to me, just clasp and tell that he was not letting me go. We lived a few minutes away through the back alley, and when he didn’t find me on the other end of the phone, he would just walk by. Several times, he spent time with my mom, who was the few of the first batch of women graduates in Nepal, to apply her learning to his horizon expanding approaches, and sometimes with my young sons, who seemed fascinated holding the Nepal Khulla Cha placard. Many other times, I would drop in on any meeting he had in his home, and sometimes just two of us, with Erica- his wife, in her wide brimming smile nodding knowingly. That encounter was the last time I met him, when I promised I would come by for sure this time. Now, I feel that void and regret, on the amount of support he deserved from many like me. But he created opportunity space in politics, business, and thoughts, for everyone around him to walk their own pace.

Knowing him, in his mind, before he left earth, he probably thought that he was creating one more space that he occupied for others to step into, but I know he was not right about this, instead what he has done is left a void that no one else will be able to fill.

(Simón Dhungana is a management professional living in Maryland and was the Chair of Bibeksheel Earthquake Response Task Force.)

KATHMANDU, Nov 22: The Members of Parliament (MPs) have called for developing the bill related to the social security to... Read More...