12th anniversary of signing of the CPA

The price of peace: Rs 166 billion and still counting 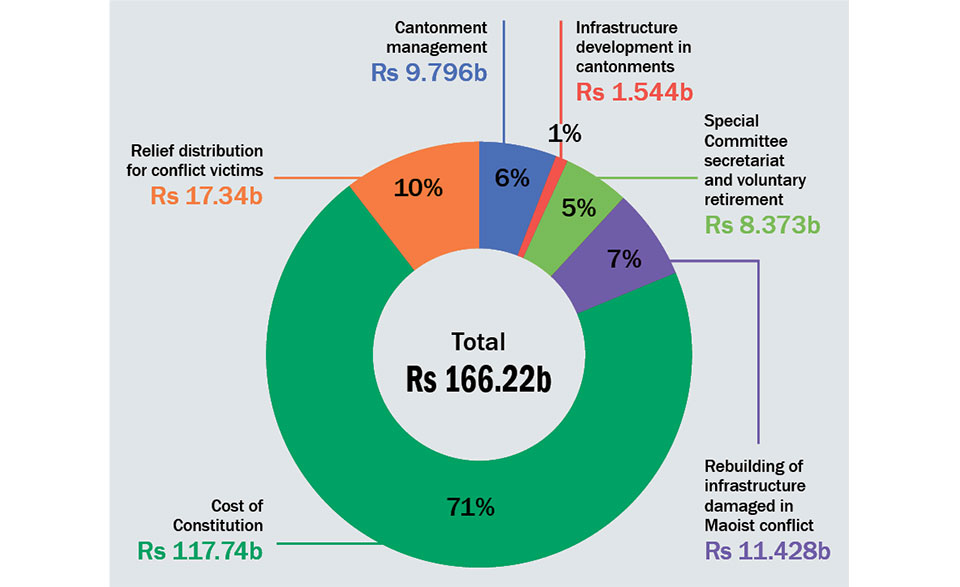 KATHMANDU, Nov 21: While the decade-long Maoist armed insurgency played a major role in the transformation of Nepal's political landscape, the price this impoverished country had to pay for the peace process that began once the Maoists laid down their arms in 2006 is found to be way high.

Although work on one of the three building blocks of the peace process – transitional justice for conflict victims — is yet to begin in earnest even as Wednesday marks the 12th anniversary of the signing of the Comprehensive Peace Accord (CPA), a rough calculation of the money spent so far has reached the astounding figure of over Rs 166 billion. The two other building blocks of the peace process were promulgating a new constitution through an elected Constituent Assembly and management of the erstwhile Maoist combatants.

According to figures prepared by the government, a total of Rs 117.74 billion was spent for promulgating a new constitution through an elected Constituent Assembly (CA). While the CA with its 601 members was too big, the cost of drafting a national charter increased significantly as the first CA was dissolved in May 2012 without having done its work.

Another CA election was held in November 2013 and the new constitution was eventually promulgated two years later .

Another major expense the country had to bear for the ongoing peace process is the relief provided to conflict-affected individuals. Although the amount provided to conflict victims during 2016/17 ( the last fiscal year for which full data is available) is yet to be tallied from district administration offices (DAOs) across the country, the amount released after 2006 under the head of relief for those affected by the Maoist insurgency has totaled Rs 17.34 billion.

According to the Ministry of Home Affairs (MoHA), which now oversees the distribution of relief to conflict victims, the money was distributed to the kin of those killed during the insurgency, to single women and the families of the disappeared, among others. Each family of those killed in the course of the insurgency was provided Rs 1 million .

The government spent Rs 9.796 billion separately for cantonment management, while an additional Rs 1.544 billion was spent for the development of infrastructure in the cantonments.

Altogether 17,052 erstwhile Maoist combatants participated in the verification process of integration into the Nepal Army. While 15,642 ex-combatants chose rehabilitation into society, another 1,422 chose integration .

The ex-combatants who opted for voluntary rehabilitation were provided a package of Rs 500,000 to 800,000, depending on their rank in the Maoist armed outfit.

The government had formed a Special Committee Secretariat for facilitating the rehabilitation and integration . According to data compiled by the now dissolved Nepal Peace Trust Fund, a total of Rs 8.37 billion was spent for this purpose.

A huge chunk of money has also been spent on rebuilding infrastructure destroyed by the Maoist insurrection. Although the exact amount spent for rebuilding damaged infrastructure in the last two year is not available, official figures put the amount at Rs 11.428 billion .

According to Home Ministry officials, the several billions spent on various activities carried out in the name of peace building by the erstwhile Ministry of Peace and Reconstruction also need to be added to the total cost of peace . And this still does not include what has been spent so far on the Truth and Reconciliation Commission and the Commission for the Investigation of Enforced Disappeared Persons (CIEDP).

As the government is preparing to expedite the transitional justice process amid the complaints of conflict victims, it is estimated that several hundred billions will be required to appease these victims with reparations and other sops. The TRC and CIEDP, whose extended terms are expiring on February 26, 2019 although they have yet to complete even a small portion of their mandated tasks, have so far received over 63,000 and about 3,000 complaints, respectively.

Similarly, over 4,000 erstwhile Maoist combatants who were disqualified for integration or rehabilitation, have announced they will launch fresh struggles if they are not included in the transitional justice process and provided adequate compensation.