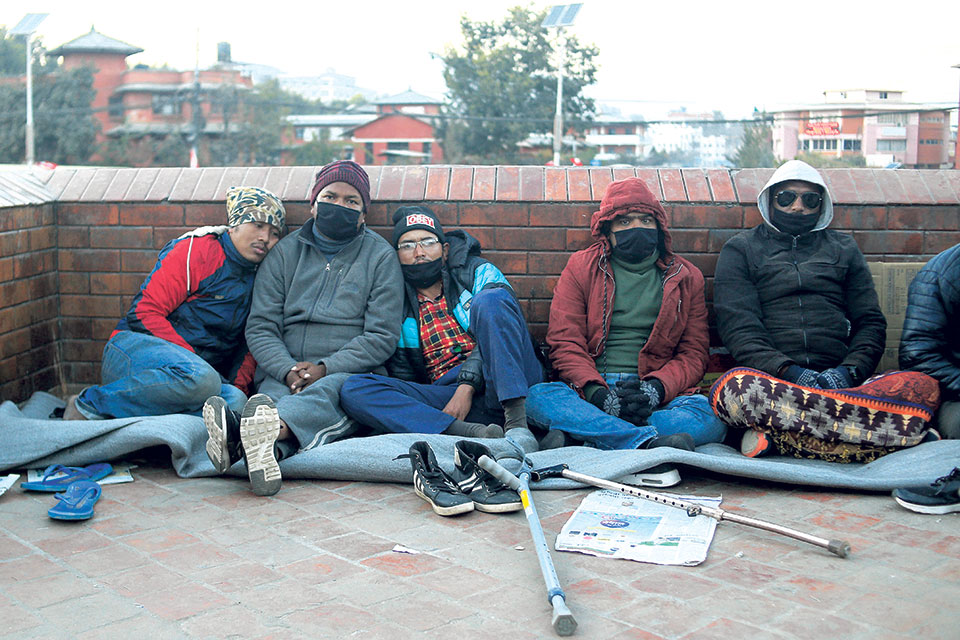 Former Maoist combatants who were injured during the insurgency and are still undergoing treatment, stage a hunger strike at Maitighar Mandala in the capital on Sunday demanding that the government foot their medical bills. Sunday was the fourth day of their hunger strike. Photo: Dinesh Gole/Republica

KATHMANDU, Dec 17: Sangrame Sarki of Kalikot can barely walk since the bullets fired by army personnel during the civil war pierced through both of his legs. Toiling hard for earning a living is beyond his imagination.

Sarki, a former Maoist combatant, was injured in Arghakhanchi in September 2002. He returned home after spending a long time in the United Nations cantonment after the signing of the peace accord. He had received Rs 500,000 from the government as part of its rehabilitation package.

For him, the money was not even adequate to cover his medical expenses for a few months.

His wife, Kismita, who was also a Maoist combatant, got injured in course of attacking Pili of Kalikot. She is still unable to remove the shrapnel from her head. Their three children aged between eight to fourteen years are still too young to earn for the family.

“My legs have become numb. I can hardly feel anything. For me life is meaningless. I wish I better die here if the government does not address our demand,” said Sarki.

The former Maoist combatant, who is staging a hunger strike together with other five injured Maoist combatants at Maitighar Mandala of Kathmandu since the last four days, said he wants to die instead of living a miserable life.

“We met minister [Ram Bahadur Thapa] for several times and begged for our life-long treatment. But he has now stopped meeting us,” said Sarki.

Frustrated by the government's negligence, Mangalsen Praja of Makawanpur is lying on a concrete floor at Maitighar Mandala as part of his protest. The 33-year-old Praja lost his elder brother, Raju Praja, in the armed conflict and his mother died of heart attack due to the shock. Having no option to survive his father begs for a living, according to Mangalsen.

Praja, who was injured during a clash with the security forces, died inside Nawalparasi-based Paribartan Smriti Brigade.

“I nearly lost my life in war. Shrapnels are still inside my chest. I feel it is better to die instead of seeing the miserable condition of my family,” Mangalsen said.

Injured Mangalsen now feels deceived by his commanders, who hardly recognize their contribution. Most of the commanders have now been appointed as ministers in the federal, provincial and local governments but the combatants who risked their lives for a change are still living miserable lives. They have no other option but to stage a hunger strike even in such a freezing weather.

As part of bringing the former rebels into mainstream politics, the government has already spent more than Rs 166 billion for the peace process and constitution writing process.

“I have nowhere else to live except for the street as I have mortgaged my land to receive loan from a bank. I wish I could die here so that my kids would get relief from the government,” says Lilachand Kami, another injured ex-Maoist combatant.

Worried over the increasing protests of injured ex-Maoist combatants, police have already arrested Yubaraj BK, who was leading the protests. Those staging hunger strike in Kathmandu say their leader was arrested under pressure from the home minister.

The Ministry of Home Affairs is cautious following the recent suicide attempt by Kul Prasad Bhattarai, a former Maoist combatant, inside the home minister's office in Singha Durbar. Frustrated with his life, Bhattarai, who is also living with shrapnel wounds had reportedly consumed poison in the office of the minister after failing to manage his medical expenses.