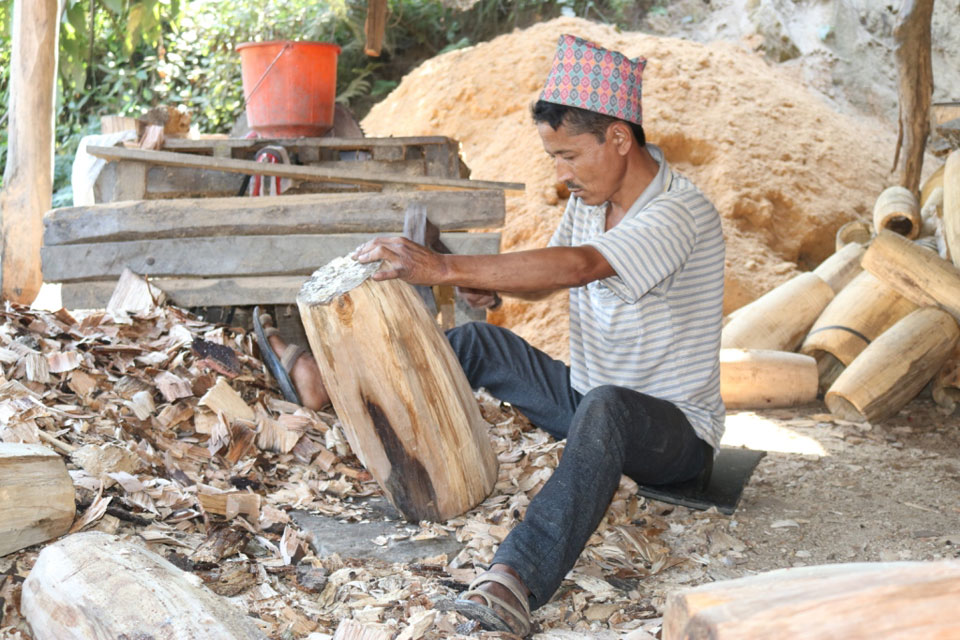 Folk music lovers and music store owners from various districts visit Indra Bahadur's shop along the Prithvi Highway and buy the popular percussion instrument, which is an essential element of Nepali folk music.

DHADING, Nov 5: On any given day, Indra Bahadur Tamang of Thakre Rural Municipality-6 of Dhading is found busy carving madals (a Nepali hand drum) at his workshop. He worked in Katmandu for a year after receiving madal-making training in the capital for three months in 1980. Later, in 1982, he opened a small madal along the Prithvi Highway. Over time, he transformed the little shop into a factory and named it Indra Madal Baja Prashodhan Udyog.

Folk music lovers traveling along the highway and music store owners from various districts visit his shop and buy the popular percussion instrument, which is an essential element of Nepali folk music. According to him, he started the business after seeing impressive sales during weddings and festivals, especially Tihar.

"I spent 36 years of my life making madals and now I provide employment to many others," said Indra.

In lack of modern machinery and tools, for 16 years his factory was powered by a water wheel.

With Tihar on the doorstep, demand for madal is high, which is why he is working harder and faster to make best madals.

Besides madals, Tamang also makes various other hand drums including dhime, tabala, dholaki, and khainjedi. Music shop owners from Pokhara, Kathmandu, Narayanghat and Trishuli among other places visit his shop to buy his wares.

At a time when modern musical instruments are fast replacing traditional instruments, Indra is among a few craftsmen trying to keep the tradition alive.

While madal is a source of entertainment for others, it is his bread and butter. He says new generation is least interested in the madal-making craft because the process is cumbersome and time-consuming.

Wood, animal skin, coal, etc are the essentials for making madal and Indra brings them all from other districts. He makes around Rs 400,000 per year selling the drums. Currently, seven people are employed in his factory. He has a wife and three sons and four daughters and he has been meeting all the expenses of the family by selling madals and other hand drums.

Though his sons sometimes help their father with madal-making, Indra has little hope that they will continue the family business.

Ramkrishna Tamang of Thakre Rural Municipality-6 has been working at Indra's factory for the last six years. Ramkrishna said they use the wood of uttis, an alder variety, to make madals.

Ramkrishna, who had a few years ago made up his mind to go abroad for employment changed his mind after working at Indra's factory. He says he has been earning enough to meet the expenses of his family. This craft is at risk of disappearance due to the shortage of materials and manpower, Ramkrishna said.

DHADING, July 12: The Prithvi Highway has been obstructed due to the landslide triggered by incessant rainfall since last night. Read More...

DHADING, July 1: Two persons died while 25 others were injured in a collision between a bus and two microvans... Read More...

Danish tourist dies at Makalu base camp
17 hours ago

MCC will be endorsed only after consensus among major political parties: FM Dr Khadka
13 hours ago

54 injured in bus accident
13 hours ago