The life of a classical musician 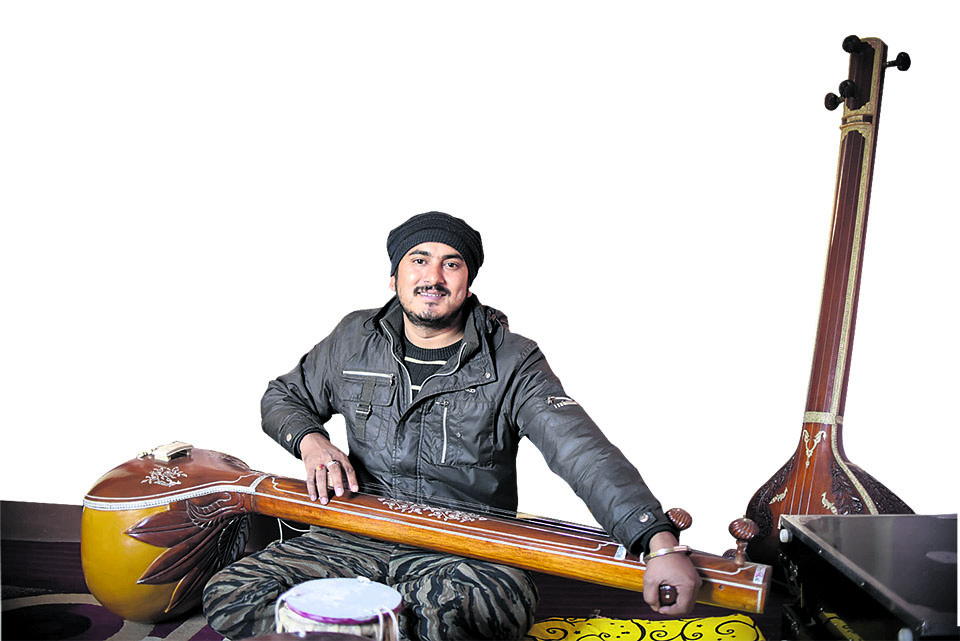 Although his prolonged stay in Banaras would teach him a lot about music and life, his initial days at BHU were reminiscent of his days at the Lalitkala Campus. He couldn’t grasp a lot of what was being taught in class and was performing poorly.

From being forced to listen to his grandfather and his colleagues practicing music to being a composer, vocal instructor and music professor, Utsav Budhathoki has come a long way. He used to teach music at Tribhuvan University up until quite recently and now has students coming to his home to learn music. Although his journey thus far has been laced with struggles, Budhathoki says his isn’t a sad sob story to success. The lessons he has learnt in life have been invaluable. “I’ve also realized that however hard you feel like life is pushing you, you should push back harder,” he says.

Early introduction to music
Budhathoki’s first introduction to music was through his grandfather Ashok Kumar Gautam who was a flute player. Living with his grandfather, he was a reluctant musical audience but he slowly started to really like music. Unfortunately for Budhathoki, his grandfather died when he had finished his second grade and he had to move back with his parents in Bardibas. Because no one in his immediate family had any interest in music, he didn’t get exposed to music until high school. Some seniors at high school had formed a band and used to practice often and Budhathoki would often sneak up on them. Later on, a senior noticed Budhathoki’s interest in music and taught him how to play the guitar.

By the time Budhathoki joined plus two, his interest in studying technical subjects like mathematics and science was starting to fade. Instead, he would focus on singing and playing cricket. One day, his father found out that his son was more interested and skilled in these things and actually encouraged him to pursue his passion and his family prepared to send him to Kathmandu for that.
“That’s something I’m still very grateful for. We didn’t have a lot of money and sending a family member to live in the most expensive city in the country was a big deal,” he says.

Pursuing musical education
Budhathoki returned to Kathmandu with fresh dreams. He joined Lalitkala Campus but he was the weakest student there. However much he tried, he couldn’t follow whatever it was that his teachers were teaching is class. As a last resort to get his studies back on track, he asked his mother to persuade one of his teachers, Ramesh Pokharel, into tutoring him. And that’s how, every morning at five, Budathoki started getting tutored by Pokharel. He calls this one of the three biggest turning points of his life.

Soon enough, Budhathoki started getting better marks on each test. By the time he finished grade twelve, he had become one of the good students in his batch and applied to a famed musical university in Kolkata for undergraduate studies. He didn’t get accepted but Budhathoki eventually, following Pokharel’s advice went on to get his bachelor’s and master’s degree from Banaras Hindu University (BHU).
Although his prolonged stay in Banaras would teach him a lot about music and life, his initial days at BHU were reminiscent of his days at the Lalitkala Campus. He couldn’t grasp a lot of what was being taught in class and was performing poorly. Later on, one of his classmates introduced him to Shree Sunil Singh and Budhathoki claims that meeting him and getting to know him changed his life forever.

Banaras and Shree Sunil Singh
“I still remember the first time I showed up in his class, he asked me why I was there,” recalls Budhathoki, “I answered with a short ‘to learn music’. After a brief moment of silence, he replied that he didn’t teach music there and that I should only stick around if I wanted to learn life.”
Budhathoki mentions that Singh believed in the Gurukul educational style learning and that is what he implemented during his classes. Although he was a very strict teacher, Budhathoki mentions that Singh was the most child-like and playful teacher he has ever had. He says that whatever Singh taught him in the seven years he was with him was more than anything he has ever learned through any institution.

Throughout his stay in Banaras, Budathoki earned his own living because he didn’t see it fit to keep asking his parents for monthly allowances. Although he picked up a bunch of low paying jobs at first, he later realized that he could earn enough to sustain himself just by playing the guitar. He mentions that since everyone in Banaras was completely into traditional music, they didn’t have much exposure to modern music. And whenever he strummed his guitar at a public place, people would crowd around to just watch him.

He started getting playing gigs from different event organizers and even home tuition offers and slowly created a name for himself there. At BHU too, Budhathoki was establishing himself as one of the best students there – academically, performance wise and regarding how much he knew about classical music. He and his band also won the National Youth Festival multiple times when they participated as representatives of BHU. But about two years ago, after their daily tutoring session, Singh passed away. Budhathoki, who had plans of pursuing a musical career in Delhi, was so unnerved by this that he decided to come back to Nepal.

Back home
Back in Nepal, Budhathoki gathered other classical music enthusiasts from his hometown and formed a sort of classical band. He had hopes of developing his career as a singer and even planned events for the band. But all of his band mates quickly started losing interest and left the band one by one. Budhathoki started losing focus in life. Eventually, a friend introduced Budhathoki to theater artist and director Sunil Pokharel.

Pokharel was looking for someone who could compose music for his upcoming play. Although everyone else underestimated Budhathoki because of how worn out and tired he looked, Pokharel was impressed with his musical knowledge from the very first day. Budhathoki mentions that hiring him to organize the music for the play was a huge gamble on Pokharel’s part. According to Budhathoki, meeting Pokharel and working with him time and again is the last of the three biggest events that have happened in Budhathoki’s life so far.

“There are four people who have been able to teach me music and life through music. All of them did so in very different manners and circumstances and I greatly value that,” he says.

Budhathoki’s thoughts on music
Budhathoki mentions that the way people treat classical music right now disheartens him. He personally believes that we have lost the ability to understand and feel classical music and are instead being brainwashed by the (mostly) tasteless mainstream music. “Once people understand and feel classical music, they’ll never underestimate it again,” he claims. Another big problem he sees in the Nepali music industry is how everything is commercialized. He reveals that a lot of artists are distorting music and putting out mediocre songs. He believes that good music has the capacity to unite people and thinks artist would do well to remember that.

The ongoing third Gharana Music Festival 2017 has brought together many national and international artists in Nepal under a single... Read More...