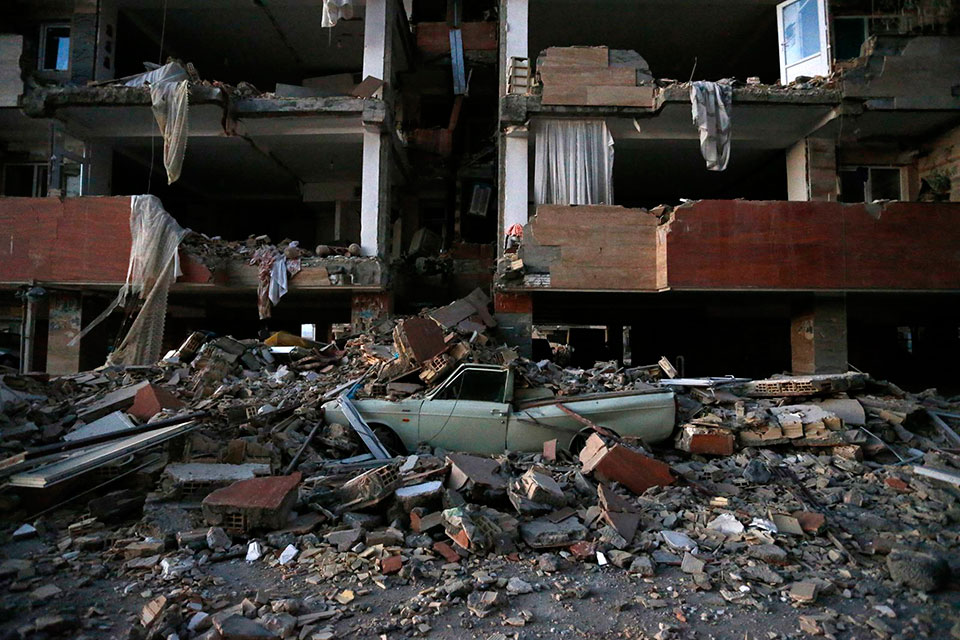 In this photo provided by the Iranian Students News Agency, ISNA, a car lays smashed by debris from the earthquake at the city of Sarpol-e-Zahab in western Iran, Monday, Nov. 13, 2017. A powerful earthquake shook the Iran-Iraq border late Sunday, killing more than one hundred people and injuring some 800 in the mountainous region of Iran alone, state media there said. (AP)

The temblor killed at least seven people in Iraq and injured 321 there, all in the country's northern, semiautonomous Kurdish region, according to Iraq's Interior Ministry.

The magnitude 7.3 quake was centered 19 miles (31 kilometers) outside the eastern Iraqi city of Halabja, according to the most recent measurements from the U.S. Geological Survey. It struck at a depth of 23.2 kilometers (14.4 miles), a shallow depth that can have broader damage. Magnitude 7 earthquakes on their own are capable of widespread, heavy damage.

The quake was felt as far west as the Mediterranean coast. Its worst damage appeared to be in Iran's western Kermanshah province, which sits in the Zagros Mountains that divide Iran and Iraq. Residents in the rural area rely mainly on farming to make a living.

Iranian social media and news agencies showed images and videos of people fleeing their homes into the night. More than 100 aftershocks followed.

Iran's state-run television reported the increase in fatalities early on Monday and said rescue work was continuing overnight and would accelerate during the daytime. Iran's Health Ministry put the number of injured at more than 2,500, the semi-official ISNA news agency reported.

Iran's Supreme Leader Ayatollah Ali Khamenei offered his condolences on Monday morning and urged rescuers and all government agencies to do all they could to help those affected, state media reported.

The semi-official ILNA news agency said at least 14 provinces in Iran had been affected by the earthquake.

Officials announced that schools in Kermanshah and Ilam provinces would be closed on Monday because of the temblor.

In Iraq, Prime Minister Haider al-Abadi issued a directive for the country's civil defense teams and "related institutions" to respond to the natural disaster. Brig. Gen. Saad Maan, an Interior Ministry spokesman, gave the casualty figures for Iraq. The quake could be felt across Iraq, shaking buildings and homes from Irbil to Baghdad, where people fled into the streets of the capital.

The Iraqi city of Halabja, closest to the epicenter, is notorious for the 1988 chemical attack in which Saddam Hussein's regime killed some 5,000 people with mustard gas — the deadliest chemical weapons attack ever against civilians.

Iran sits on many major fault lines and is prone to near-daily quakes. In 2003, a magnitude 6.6 earthquake flattened the historic city of Bam, killing 26,000 people. The last major casualty earthquake in Iran struck in East Azerbaijan province in August 2012, killing over 300 people.

POKHARA, July 6: The death toll in Upper Mustang tipper accident has reached 15, while 14 others have sustained injuries. Read More...

PALPA, June 1:  Fourteen staffers were killed and 10 others have sustained serious injuries after a bus fell 200 meters... Read More...

KALIKOT, Nov 29: The death toll in a road accident involving a Bolero jeep at Khandachakra Municipality-1 in the district... Read More...

Lack of capable leadership to drive the economy has posed a challenge to economy: FNCCI President Golchha
19 hours ago
Industry minister vows to help grow industrial sector
15 minutes ago