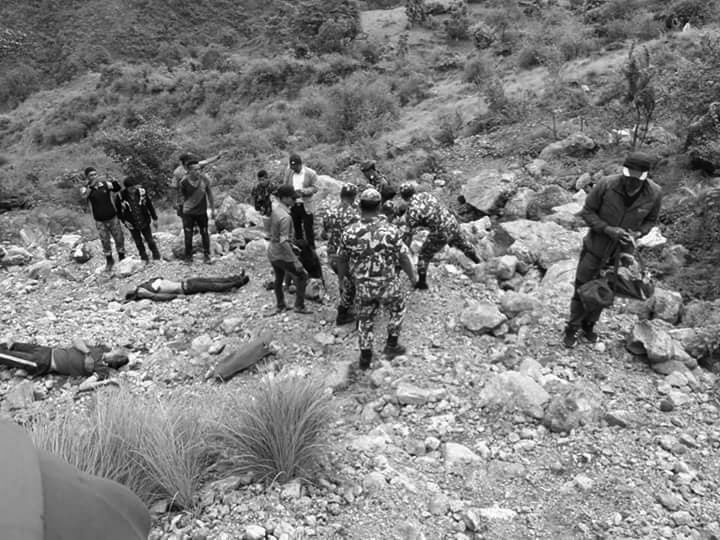 RUKUM, July 19: The death toll in the Rukum jeep accident has reached seven after three more bodied were recovered from the accident site. The condition of the four injured is critical.

The accident took place when an ill-fated jeep, Lu 1 Ja 2573, heading to Dhaulapahira ferrying passengers from Chhipridaha skidded off the rough road and fell some 500 meters down the road near Dharapani in Sisne rural municipality in East Rukum on Wednesday afternoon.

The deceased have been identified as 23-year-old Kiran Pun of Putha Uttarganga rural municipality-2, Buddhi Raj Pun, 32 and Kumar Pun, 40, of Ward No. 1, Tirsana Tulachan of Ward No. 14, Salina Barma, 30 of Ward No. 14, Arjun BK, 28, of Bhume-4 and Lalita Pariyar, 23, of Banke, confirmed Inspector Diwakar Rijal of District Police Office, East Rukum.

According to him, 52-year-old Jayabir Kami of Musikot Municipality-12, Pramila Budha Magar of Uttarganga rural municipality-11, Samjhana Pun Magar, 27 and Dhani Ram Pun of Ward No. 2 have sustained injuries.

They were airlifted to Kathmandu after their treatment was not possible at District Health Office, East Rukum .

A total of 11 people were travelling in the jeep.

KALIKOT, Nov 29: The death toll in a road accident involving a Bolero jeep at Khandachakra Municipality-1 in the district... Read More...

POKHARA, July 6: The death toll in Upper Mustang tipper accident has reached 15, while 14 others have sustained injuries. Read More...

PALPA, June 1:  Fourteen staffers were killed and 10 others have sustained serious injuries after a bus fell 200 meters... Read More...

When China Sneezes
17 hours ago

1 killed, 9 injured in road accident near Dhungeadda
20 hours ago

Toll rises to 19 from violence in Delhi: hospital official
17 hours ago