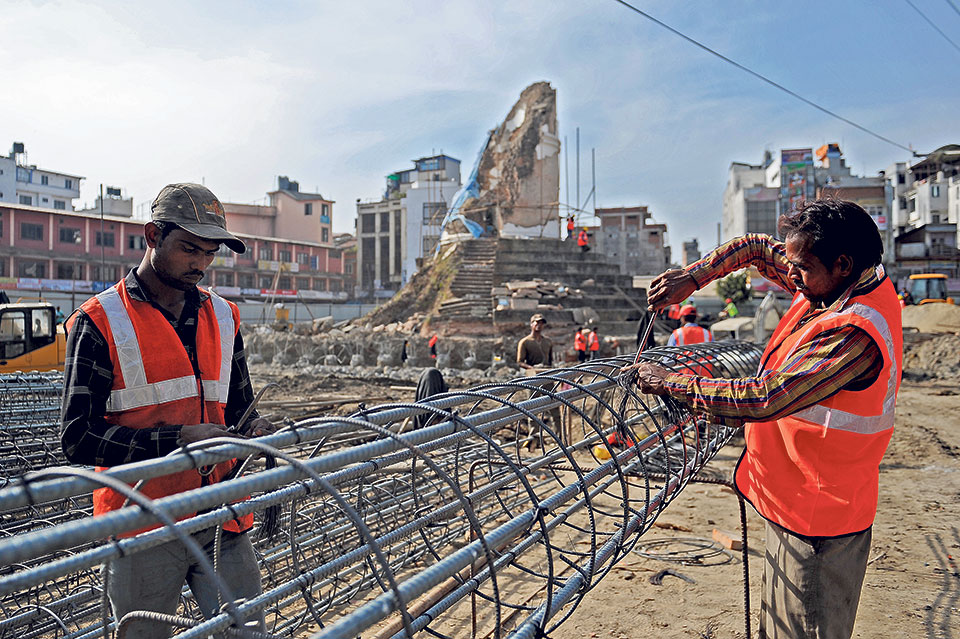 KATHMANDU, Nov 30: News that Dharahara had collapsed during the earthquake of April 25, 2015 came as a shock to every Nepali around the world. In the years that followed, when shock finally gave way to talks of the inevitable rebuilding of the monument, people’s opinions were divided on whether the Dharahara should be reconstructed. Today, if you go to Sundhara in Kathmandu where the mighty Dharahara stood previously, you will find that the area has been cordoned off and the process of reconstruction is in full swing, rekindling the debate among whispers and murmurs. 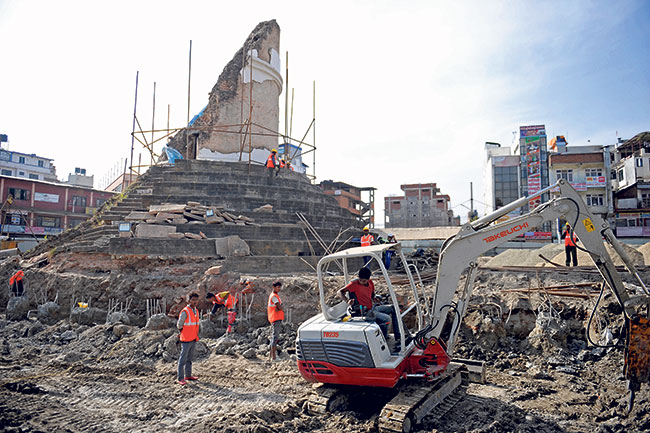 “People lost their lives because of that building. These people were sons and daughters, brothers and sisters, and fathers and mothers,” says Niva Shrestha, who lost her two brothers when Dharahara collapsed and all that remained was a huge pile of rubble. Shrestha, along with many people this scribe spoke to, were skeptical about the rebuilding of Dharahara. “Dharahara killed people twice, first in 1934 and then again in 2015. We don’t want a third time,” says Shrestha.

The new Dharahara project is highly ambitious. It’s a 22 storey (11 of which will be above ground) cylindrical building with a diameter of 40 meters. The walkway will be on the 20th floor and it will be surrounded by tempered glass unlike the grill used in the previous Dharahara.

“There will be two lifts and a staircase inside the building,” says Awal. The remains of the old Dharahara will be slightly renovated and covered in tempered glass to serve as a memorial for all the lives lost during the earthquake. The new Dharahara will also house a museum, double basement, a huge garden, and a fountain.

The neglected ‘sundhara’ in the vicinity is also being included in the new project. It will be renovated and restored to its previous glory. “The sundhara will flow 24/7 with bore-water,” says Awal. Along with this, a triple basement parking is to be constructed in the General Post Office premises near Dharahara and there will also be an eatery nearby. The idea is to create a space where people can enjoy themselves while facilitating easy access to New Road and other surrounding areas.

The locals, however, don’t seem to be impressed by the ambitious plan. Out of a random sample of 20 people that this scribe spoke to around Sundhara, 16 said they don’t understand why the government is so intent on wasting taxpayers’ money on something that isn’t necessary at all. 34-year-old Rubina Shilpakar was of the mindset that the Dharahara, which earlier served as view tower when Kathmandu didn’t have any towering structures, is a redundant building in today’s times.

“There are so many buildings, structures, and places from where you can see Kathmandu today. You don’t need a Dharahara anymore. Also in a country that’s prone to earthquakes, building a tall structure isn’t ideal,” she says adding that the country needs to learn from the past and not keep repeating its mistakes.

However, not all people were skeptical about Dharahara reconstruction. Rama Bhattarai, employee at the Social Security Fund of Nepal, says that the idea of building a new Dharahara as well as a memorial is a good one. “That way you will be paying your respects to and remembering all the lives lost and also rebuilding a structure that has such an important significance in our history,” says Bhattarai adding that not everything should be judged on the basis of its utility.

Dharahara, also known as the Bhimsen Tower, was the tallest building in Nepal for many years. It was built by Bhimsen Thapa and served as a watch-tower for the military. Smarika Phuyal, an 18-year-old Kathmandu resident, says it’s important to rebuild Dharahara because it represents our history, our glorious past when we were able to keep Nepal whole amidst all the turmoil of the Anglo-Nepal war. “It is the Nepali version of the Eiffel Tower. It has seen much of our history and stood alongside all the changes that took place in Nepal, be it social, economic or political,” she says.

Honoring the legacy of the Dharahara, the new building will be of the same color (white) as well as built in a similar design, the only change being a larger circumference. “The construction is in full swing but the wires for telephone and electricity that pass through the site both above and underground have been causing a little inconvenience,” says site engineer Awal. The wires provide electricity and telecommunication facilities to around 22,000 locals in Sundhara and Khichapokhari. The team has met with the NEA officials as well as authorities at Nepal Telecom to resolve the problem.

Awal mentions that initially the construction team also faced the problem of crowding around the site. According to him, people often blocked the pathway disrupting smooth operations during the daytime. “That is why we have now cordoned off the way leading to Khichapokhari from Sundhara,” he explains, adding that, if all goes according to the plan, the new Dharahara will be complete in two years time.

This, for Phuyal, was wonderful news. She claims that she can’t wait to see Dharahara tall and standing once again. “The earthquake caused the deaths of many and destroyed wonderful monuments. It was tragic. But rising above the tragedy is crucial. Reconstructing heritage sites like Dharahara is important because it will show our collective strength to move forward,” she concludes.

Reaching out through doodles

When the 2015 earthquake hit Nepal, Julia Bajracharya Dahal was just minutes away from climbing the Dharahara. “I was walking... Read More...