Reaching out through doodles 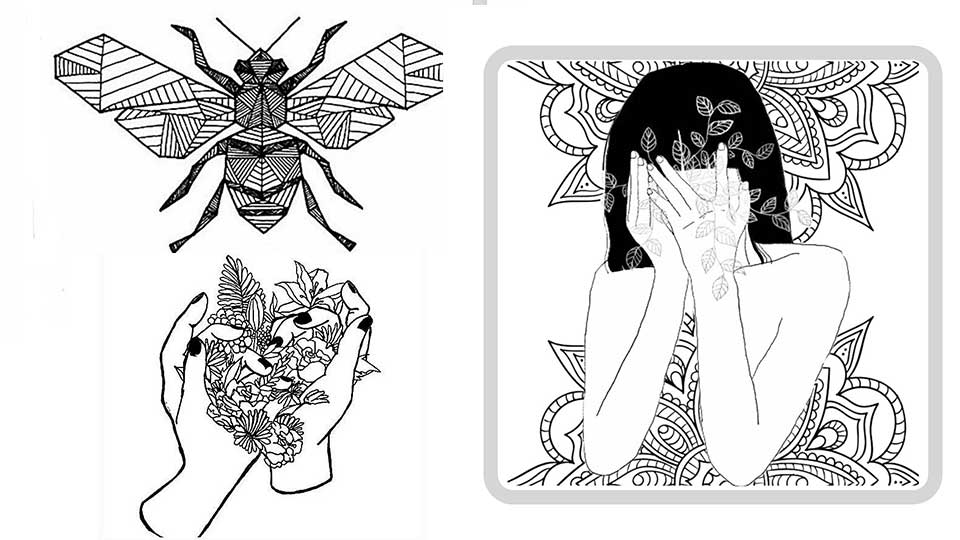 When the 2015 earthquake hit Nepal, Julia Bajracharya Dahal was just minutes away from climbing the Dharahara. “I was walking behind the Dharahara with my friend when it fell,” she says. The scare was such that she had an asthma attack and had to be taken to Bir Hospital and there she witnessed the real horror of what had actually happened. She was traumatized by this experience and found it hard to cope. That’s when doodling came into her life as a savior.

As of 2019, Dahal runs a local, home-based doodle collection called The Orange Ink that combines the art of doodling with raising mental health awareness. Doodling is also called “The art of mindfulness’. Mindfulness is a state of being in total and pleasant awareness, and that’s something that people with depression or anxiety struggle with but are in desperate need of.

“Doodling can help channel unspoken emotions, especially for people who aren’t able to put it into words,” she says. The earthquake disturbed Dahal to such an extent that she started struggling with her studies as well. However, there was no one she could really share her problems and issues with. “Most people around me just didn’t understand why I was sulking or why my grades were faltering,” she says.

Fortunately it was around this time that she met a French tourist staying at her mother’s hotel in Pokhara who told her as well as taught her about doodling. And that’s when she finally found some peace of mind. With every scribble she felt her bottled up emotions surfacing and giving her some clarity of thought.

When she was finally in a good place after a long time, Dahal felt the need to get in touch with other people who were feeling the same way as she had once felt. She thought they too could come out of it, with a little help and, in this case, with doodling. So, in 2017, she started The Orange Ink as a way to showcase her doodles and spread awareness about mental health issues. Along with this, she also sells doodle cards that feature everything from a mandala to cats or portraits. The designs are available on The Orange Ink’s Facebook or Instagram page.

Dahal was born in Tansen in Palpa but grew up at Lakeside in Pokhara where her mother runs a successful hotel. As she lost her father at a young age, she was mostly brought up by her mother who, she says, has been a constant source of motivation and love. Dahal has only just finished her Bachelor’s degree but already runs a small product-service company that not only sells aesthetic products online but also spreads awareness about mental health that is still largely a taboo in our society.

Dahal also organized doodle workshops in the year 2018, one at her mother’s hotel, one ‘Christmas special’ at Dorje’s Bar and Grill (also in Pokhara) and the other at Pokhara Art Market. The workshops featured different activities relating to doodling as well as a monologue about the importance of mental health and how it can be addressed and improved via the art of doodling. “Just like any physical ailment, mental illness is also curable if proper medical attention is given to it,” says Dahal adding that the medical attention does not have to be drugs. It can also be therapy or talk/work sessions. “The main thing is to get all toxic feelings, insecurities and nihilism out of your system,” she says.

According to Dahal, the products from The Orange Ink, ranging from cards, bookmarks and postcards to stickers, doodle wall art and totes are all recycled and made from eco friendly materials like recycled fiber papers, lokta paper and cotton hemp fabric. However, if they do use plastics bags for delivery, a small note is left on the packaging requesting the buyer to reuse the plastic bags. “We wanted to be as sustainable and responsible as possible. As we deal with spreading awareness, it’s important to have some credibility and so we wanted to set a right example when it came to the environment as well,” she explains.

Dahal’s future plan includes taking The Orange Ink further and making it a platform for people to come and talk about any mental health ailment that might be troubling them and also, giving them right counseling about how to handle such situations, especially medically, and also through something unorthodox like doodling. She hopes to organize even more workshops, especially for people of the older generations who are still skeptical about mental issues and don’t know how to tackle them properly when a person close to them are suffering.

“I have been through some dark times and I know how it feels. I know there are people who are in a similar situation and have no idea how to get better,” she says adding that she has made it a point to make and share doodles that express such emotions and follow them with a reassuring caption or some heartfelt advice. “When people see my posts, I truly hope they get the courage to speak up, especially after knowing it has happened to others too,” she concludes.

KATHMANDU, Nov 30: News that Dharahara had collapsed during the earthquake of April 25, 2015 came as a shock to... Read More...

Running away from home at 13, Riddie Ghale barely knew that the journey he embarked on would end up in... Read More...