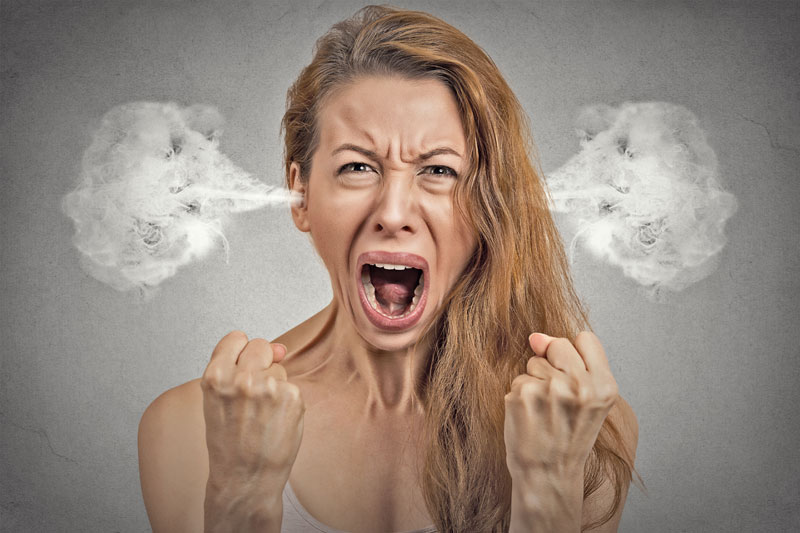 My 81-year-old maternal grandfather is perhaps the angriest person I have ever come across. In the past 30 plus years I don’t remember a single event where he hasn’t lost his cool due to one reason or the other. If his signature roaring laugh is enough to get people in stitches, his anger will make you cringe and cover your ears.

Last week he lashed out at his sons when they were arguing, as family members tend to do, over petty issues. After a good fifteen minutes or so of shouting at everybody and telling whoever tried to talk to shut up, he stormed out banging the door leaving everybody exasperated and angry with the ‘insensible’ old man. My grandfather has alienated his daughters-in-law and many other relatives by constantly losing his cool.

Anger is a completely normal, usually healthy, human emotion. However, when it gets out of control it can lead to problems – at work, and in relationships. No amount of apologies is enough sometimes to erase all the hurtful things one says in anger. Being at the mercy of an unpredictable and powerful emotion, you lose control of yourself. And that’s never a good thing.

When I went to check on my grandfather with a cup of tea an hour after he had stormed out of the living room, he confided in me that he didn’t know why he had lost it. It was something about the tone his children were using, he said. It was so inconsequential that he didn’t even remember why anger suddenly welled up in him.

My grandfather isn’t the only one who behaves like this. During conversations with friends, a lot of them have claimed to know at least one person who is exactly like him, or worse. I spoke to some people to find out what gets to them, how they control their anger or how anger controls them, and how they deal with it.

lll
I was an angry child. I think only children are often that way. I’m not saying everyone is but you are so used to being pampered that when you don’t get your way, you generally respond with anger. With age, however, I seem to have mellowed down, if I can say so myself. Now I tend to think before I speak and that helps even when you are angry, especially when you are angry. I think when you are angry and shout at people, even if you are making a valid point, it will be lost because many minds tend to shut off when faced with someone’s wrath. You are more likely to get your point across when you say the same thing without being angry.

One who is slowlycoming to her senses

Most people wouldn’t think of me as an angry person. In public, I’m jovial, light-hearted, and extroverted. But at home, I’m a different person. My wife says so sometimes. And though I respond to it with anger, often passing hurtful remarks in retaliation, I know I have a problem managing anger. It’s like I pour the entire day’s worth of frustration at home, on people who are less likely to judge me. I don’t know why but the smallest thing can set me off on a tirade. It could be as simple as the tea being too hot, my wife trying to get me to eat a little more or accidently turning off the lights when I’m still in the room. I try taking deep breaths before responding when I’m angry or counting to ten before saying anything, and as lame as that might sound, it actually kind of works for me.

I believe in sarcasm more than anger, but if I’m honest, I’m only sarcastic when I’m angry. Sarcasm bites and can actually be more hurtful than an angry stream of words. I’m also pretty good at ignoring people I don’t like so that’s another one of the angry responses I have. But the good thing about all this is that once the event or moment has passed, I rarely think about it. By being sarcastic or ignoring that person, I have dealt with my anger in the best way possible. Screaming and shouting, I believe, only waste your energy. Deal with situations and people that make you angry by being calm and calculated in your responses. That doesn’t mean being tolerant. It just means you are handling it right.

There are some people I’m really angry with, some people who behave as if they are never wrong, and never say sorry for anything. I’m actually so angry with some relatives that I find myself imagining scenarios where they are hurt in accidents, or they have lost everything they have in armed robberies or LPG explosions. I know this makes me sound like a horrid person but believe me, if someone knew the extents of how horrible these people actually are, I’d be considered a saint for just imagining these scenarios. I believe my anger is justified but sometimes I worry that this anger that I harbor is harming me. It’s like slow poison that is eating away the goodness of my sprit.

Whenever I’m angry, I tend to call the other person names. Stupid tops the list. This gets me on a nasty verbal battle with the other person and that just escalates to a whole new level with things getting meaner by the second. A friend once told me that even if you are right, calling names will automatically put you in the wrong. I agree but I just can’t seem to help it. “Why is it acceptable for you to be an idiot, but not acceptable for me to point it out?” is usually my point. The problem is I don’t really, honestly, believe it’s wrong to say, “You are stupid” when someone is being ridiculous. But that one statement is enough to get people agitated and angry.

I think anger is a weak man’s imitation of strength. I have a relative who is rude with everybody. He considers himself above all and usually tells people what to do and how to behave. If someone contradicts him, he gets mad and is rude. When he is rude, people are, in turn, rude to him and that just leads to huge altercations. Anger just leads to more anger. There is nothing it will accomplish. Also, what is the point of shouting and being mad at someone when harsh words will never have any positive impact? When something is said in anger, even if you are right, it’s very hard to get the point across. As the father of a teenage son, I have realized that you are more likely to get your kids to listen to you if you speak to them calmly. Anger never solves problems but creates ten more new ones.

Penelope Cruz says society has perpetuated many taboos around women's health issues such as menstruation and menopause, which is disrespectful. Read More...