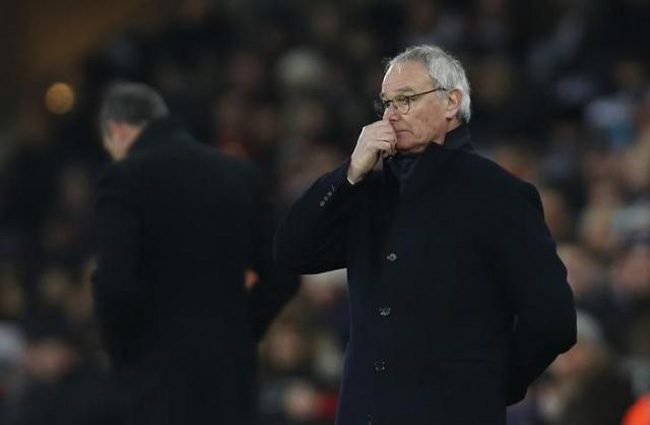 Leicester City's beleaguered manager Claudio Ranieri suggested he is ready to drop some of the players who won them the Premier League title as the Italian seeks to stave off relegation just one season later.

The champions have yet to win -- or even score -- in six league matches in 2017 and were beaten 2-0 by fellow relegation strugglers Swansea City on Sunday.

The latest setback leaves them just one point above the relegation zone with the club seemingly free-falling into the Championship.

When asked by reporters if he had been too loyal to the players from last season, Ranieri said: "I could be. Of course it is difficult when you achieve something so good, you want to give them one chance, two chances or three chances. Maybe now, it is too much.

"Of course I must change something because it's not possible to continue in this way. We have two problems - we concede and we don't score. Everybody tries to say something positive to help each other. But after, we go back (to losing games).

"I always question myself but then I always say 'come on, together we can do something good'."

amie Vardy and Riyad Mahrez, who last year both signed new contracts reported in the British media to be worth 110,000 pounds ($137,368.00) per week, have underperformed this season and could find their places under threat, along with another of last season's leading lights, Danny Drinkwater.

Leicester's astonishing decline could see them become the first English champions to be relegated from the top flight since Manchester City in 1938.

On Sunday Ranieri suggested the relegation fight will take priority over the Champions League and FA Cup, both of which competitions they remain involved in.

On Saturday they face an FA Cup fifth-round tie at Millwall, followed by the first leg of their Champions League round of 16 against Sevilla.

"It is important to be strong. Now it is 10 hours without scoring a goal and we have to find a solution because it is not possible (that) everything is wrong this season.

"The machine is not broken but when you don't play at a maximum level it is a difficult battle. We stick together. I'm confident with my players because it only takes one moment for it to turn."

Last week the Italian received a vote of confidence from the club, who said he had their "unwavering support" but British bookmakers have him at short odds to be the next Premier League manager to be sacked.

Troubled champions Leicester City were held to a turgid 0-0 draw at Middlesbrough on Monday to edge further clear of... Read More...

MANCHESTER, Oct 22: Glance at the Champions League standings and it would seem all is just fine at Leicester City... Read More...

With its out-of-form captain on the bench, United scored four goals in a sparkling first-half display and overwhelmed champion Leicester... Read More...