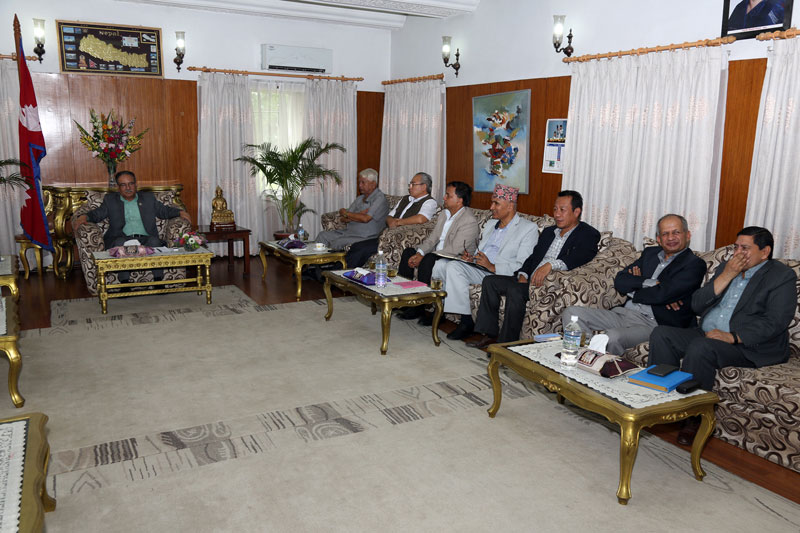 KATHMANDU, Aug 30: Tension ran high at a meeting called by Prime Minister Pushpa Kamal Dahal at Baluwatar to dwell on the demands raised by Madhesi Adivasi Janajatis and Tharus on Tuesday.

Prime Minister Dahal had called a three-party meeting to hold talks on the issues of Local Bodies Restructuring Commission (LBRC), constitution amendment and the election of local bodies on Tuesday morning.  The meeting, which was called to to forge a common understanding and consensus among the major three political parties on the set agendas, ended inconclusively.

The leaders from the three parties involved in a heated verbal exchange, creating such a situation where the leaders appeared so furious as if they were likely to go at each other physically.

Rawal came down heavily on Nidhi for discussing the issues related to the constitution amendment with the Indian leaders during his visit, saying that it was a 'serious issue'.

In the meeting, the leaders reiterated their parties’ stance rather than forging common understating on the scheduled agendas.

According to Nepali Congress leader Purna Bahadur Khadka, NC, CPN-UML and CPN (Maoist Center) put forth their parties’ stance over the report of the LBRC in the meeting.

Dahal had floated a proposal to address the demands raised by the Madhesi parties in the meeting.

In response, the main opposition party CPN-UML asked the purpose of addressing the demand of the Madhesi parties.

While the NC underlined the need to resolve the demands of the agitating parties in line with the constitution.

Unity with KP Oli is next to impossible: Madhav Nepal
16 hours ago

KP Oli thinks he is a king: Dahal
20 hours ago

Biden White House asks 'Trump who?' ahead of speech to conservatives
16 hours ago

Unity with KP Oli is next to impossible: Madhav Nepal
16 hours ago

Parties will forge an understanding: Speaker Sapkota
17 hours ago

NCP’s legitimacy row to be resolved at the earliest: Election Commission
18 hours ago
National Youth Council chairs appointed in 71 districts
19 hours ago