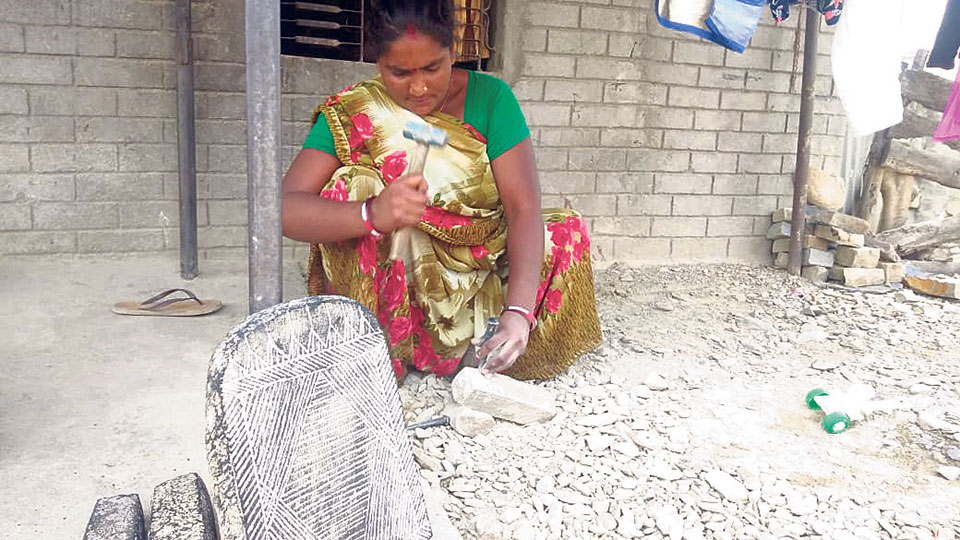 A woman from the Kushwadiya community carving stones under the suspension bridge of Devinagar in Butwal in this recent picture. Photo: Binod Pariyar/Republica

RUPANDEHI, June 2: On the banks of Tinau River, there is a settlement of Kushwadiya community who are usually seen carving stones from early mornings to late evenings. These stone carvers have been earning their living by shaping stones for more than two decades.

As Butwal has some famous markets for selling jaanto (circular stone grinders used for making wheat, maize, millet, rice, etc. flour) and silauta and lohoro (a pair of stone grinders used for making pickles and crushing spices), these people permanently moved to Tinau which lies near the market area. However, modernization and technological advancement are pushing this ancient profession towards extinction. The dying profession has compelled these community members to struggle for their survival.

Though in the past, their stone tools had high demand in the market these days, they have to wander places to sell them. They often have to return home without selling a single piece. They lament that until five years ago, they sold at least 34/40 pairs of silauta and lohoro in a day but nowadays they hardly sell one.

Saroj Kushwadiya, 38, who has been carving stones since the past 25 years has been struggling to protect her traditional profession. “My husband has paralysis. I have to make money to educate our six children all by myself,” said Saroj, adding, “Our expenses are increasing day by day, but our income has decreased significantly.”

She blames modernization and invention of technologies for this. With the growing use of electric mixers and grinders, people have stopped using silauta and lohoro. Similarly, the installation of modern flour mills in villages has decreased the demand for jaanto. On top of that, the lack of availability of stones has added further challenges.

“We have to spend a lot of time for making grinders and then visit the homes of people to sell them,” she said, adding, “As people are not interested in buying our products, we have to sell them at a low price as we can’t afford to return home empty handed.” While they are struggling to protect their dying profession, the government has prohibited them from using stones without paying a royalty to various committees. “We can’t switch to other professions as this is the only skill we have,” she added.

Her family has been living in the banks of the river by paying a monthly rent of Rs. 4,000. With the downfall in the prices of grinders, Saroj had to admit her daughters to community school from boarding school.

Rajesh Kushwadiya of Butwal, Hattisud changed his profession after the money earned from stone carving could not sustain his living. He says the decreasing market value of grinders made him quit his family profession. Nowadays, he has been driving e-Rickshaw.

“I must pay fees for my children and also manage household expenses. It was not possible to do it by carving stones. So I switched to driving e-rickshaw,” said Rajesh. He complained that the government has done nothing for the upliftment of living standard of people of his community. “Instead of supporting us, the government forced us to pay a royalty for our job when we hardly earned any money,” Rajesh laments.

Poverty has become a significant problem for all stone carvers. Santosh Kushwadiya, the former central vice-chairperson of Kushwadiya Samaj and chairperson in Rupandehi, says even the local government units have failed to introduce any program for the empowerment of Kushwadiya community.

Stone carvers across the country have been facing a financial crisis of late. He argues that the stone grinders and other stone products that the community specialized in making have become incompetent to technological advances.

“Most of the stone carvers have left their profession,” said chairperson Santosh. It’s not like these people are quitting this profession out of choice but due to obligation. Some are still holding onto it despite the loss for saving the art. He stressed that the government must prioritize this indigenous tribe and help them grow socially, economically, and politically.

The good thing is that the government has been providing social security allowance of Rs. 2,000 per month for the people of this community. Though this has been a great help for them to run their household expenses, it has not played any significant role in uplifting their living standard.

Stone carvers usually live on the banks of rivers where there is easy accessibility of stones. Around 25 such households live near the suspension bridge in Butwal, Devinagar. Apart from that, there is a dense settlement of these community members in Patkhauli, Bethari, Chapiya, Manpakadi area,  among other places. In Rupandehi alone, there are more than 6,000 stone carvers.