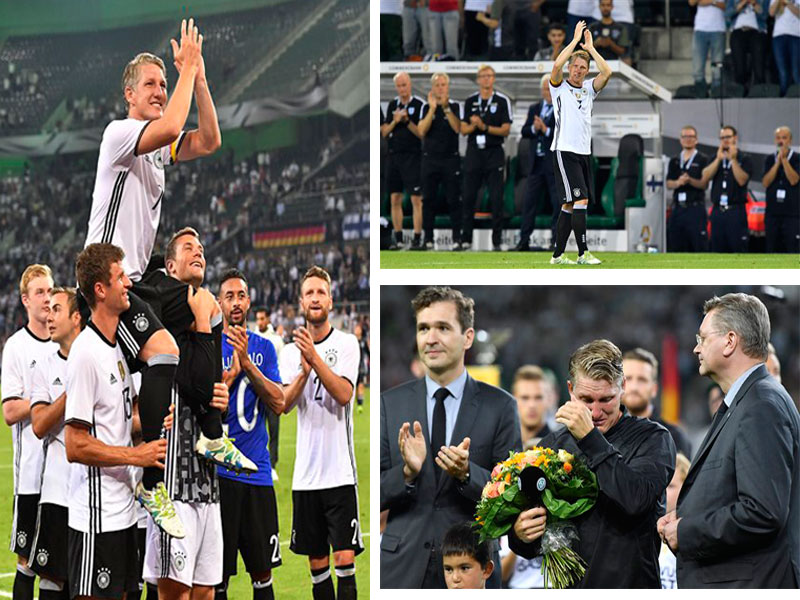 FRANKFURT, Sept 1: Bastian Schweinsteiger captained Germany for the last time in a 2-0 friendly victory over Finland on Wednesday, receiving an emotional send-off to cap a 12-year international career that included the 2014 World Cup title.

Schweinsteiger burst into tears as he was honored before kickoff and was cheered nearly every time he touched the ball. The 32-year-old midfielder decided to quit the national team after the European Championship, where Germany lost in the semifinals to host nation France in July.

Leaving the match in the 67th minute, Schweinsteiger received another standing ovation. Minutes earlier, a fan managed to run onto the pitch unchallenged and took a selfie with the smiling Schweinsteiger before running off.

"I was very touched, I was enjoying every second," he said. "It was a great honor to play for Germany and you fans."

Germany used a largely second-string lineup and eased past a Finland team that rarely threatened.

The match was played at a leisurely pace, with Germany's goals coming in the second half. Max Meyer broke the deadlock in the 55th and substitute Mesut Ozil completed the win in the 77th.

Schweinsteiger made his debut in 2004, in a 2-0 loss to Hungary, and finished with 121 caps. His teammate Lukas Podolski, whose Germany career began at the same time and who also quit after the European Championship, was at the stadium to see his friend off but did not play because of an injury. He will get his farewell match next year.

Schweinsteiger didn't want to give up the captain's armband and Germany was without a captain for a few minutes, until Thomas Mueller came off the bench with a spare one.

Germany plays Norway in a World Cup qualifier on Sunday as it begins its campaign to defend its title in Russia in 2018, but coach Joachim Loew rested most of his regulars, giving young players a chance to prove themselves.

Meyer scored after a low cross from Mario Goetze. Kevin Volland let the ball through and Meyer connected with a low shot. Ozil scored after another assist from Goetze.

In other friendlies in Europe, Norway had less than an ideal preparation before hosting Germany by losing 1-0 at home to Belarus.

Russia earned a 0-0 draw in Turkey in a friendly that was arranged late in order to mark an improvement in diplomatic relations between the two nations after a period of strained ties, following the shooting down of a Russia war jet by Turkey.

Russia's new coach Stanislav Cherchesov has thoroughly revamped the squad after the team's flop at the European Championship.

Also, Ireland trounced Oman 4-0, Denmark thrashed Liechtenstein 5-0, Estonia drew 1-1 with Malta and Albania was held to a 0-0 draw by Morocco.

MADRID, May 28: The Luis Enrique era in Barcelona came to an end with the coach lifting one last trophy.... Read More...

Ali to return to his old Kentucky neighborhood 1 last time