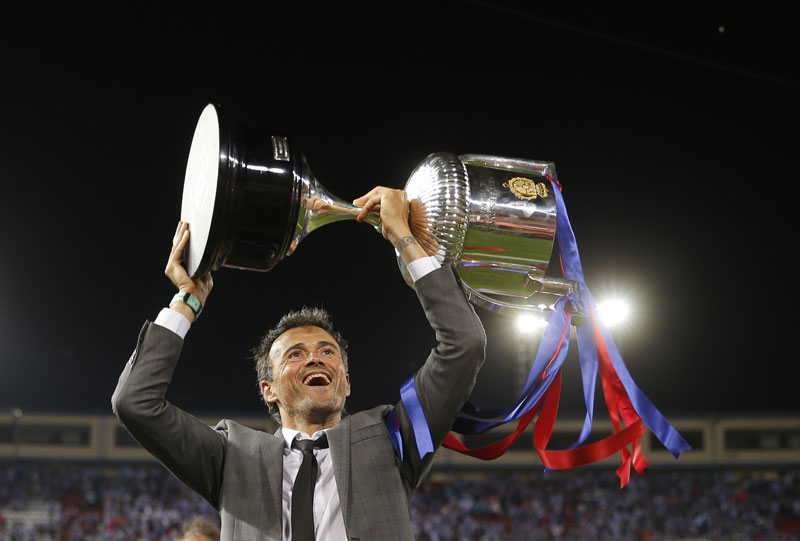 MADRID, May 28: The Luis Enrique era in Barcelona came to an end with the coach lifting one last trophy. The coach raised the Copa del Rey after Barcelona defeated Alaves 3-1 in the final on Saturday.

Lionel Messi, Neymar and Paco Alcacer scored in the first half as Barcelona won its third straight copa and 29th all-time.

Luis Enrique capped his three-year stint with the club with his ninth title out of a possible 13.

He celebrated by waving his winner's trophy and singing the club's anthem in front of the Barcelona fans who traveled to the final in Madrid.

"We finished the season how we wanted to finish it," Luis Enrique said. "I leave with the feeling of mission accomplished."

It was the final competitive match at Atletico Madrid's Vicente Calderon Stadium, which will be demolished to give way to a housing complex. Atletico moves into a new venue next season.

Alaves, the minnow Basque Country club promoted to Spain's top flight this season after 10 years in the lower divisions, was playing in the final of a major tournament for only the second time in its 96-year history. The other was the UEFA Cup 16 years ago, when it lost to Liverpool 5-4 in extra time.

Barcelona dominated and opened the scoring in the 30th minute with a well-placed shot by Messi from just outside the box after a pass by Neymar.

Alaves, which beat Barcelona in the Liga, equalized three minutes later with a superb free kick shot by Theo Hernandez.

But Barcelona regained control with a couple of goals just before halftime. Neymar scored after a pass by Andre Gomes in the 45th and Alcacer added to the lead from inside the area after a great slalom run by Messi three minutes into stoppage time.

Alaves almost opened the scoring when Ibai Gomez struck the post after a blunder by Barcelona defender Gerard Pique just before Messi's goal.

"There are mixed feelings," Alaves coach Mauricio Pellegrino said. "We are disappointed with the result, we had high hopes, but we are happy for what we did the entire season."

It was only the second title for Barcelona in a relatively disappointing season. It was eliminated by Juventus in the quarterfinals of the Champions League and lost the Spanish league title to Real Madrid in the final round last weekend. Its other title was the Spanish Super Cup.

Luis Enrique, who made the surprising announcement in March that he was leaving Barcelona so he could get some rest, never lost a Copa del Rey home-and-away series since he took over the club, a run of 12 straight triumphs ahead of the final.

Defender Javier Mascherano had to be substituted less than 10 minutes into the game with a head cut after colliding with an Alaves defender. He also injured his right knee on the play, and was on crutches during the title celebrations.

Barcelona played without striker Luis Suarez because of a suspension.

Before the game, five members of a radical group of Barcelona supporters were arrested after they allegedly robbed and trashed a small store in the Spanish capital.

Barcelona's victory meant Athletic Bilbao will earn the final spot from Spain in the Europa League. Athletic finished seventh in the Spanish league, outside of the automatic qualification spots, but it earned a berth because Barcelona will play in the Champions League. Alaves needed to win the Copa del Rey title to qualify.

MADRID. Jan 5: James Rodriguez made the most of a rare start for Real Madrid on Wednesday, scoring twice in a convincing 3-0... Read More...

Tiwari is new DG of Department of Industry
3 minutes ago

NMA to provide relief to 3,000 tourism workers
9 minutes ago

Govt to provide up to Rs 1.5 million each to workers abroad in legal aid
1 hour ago