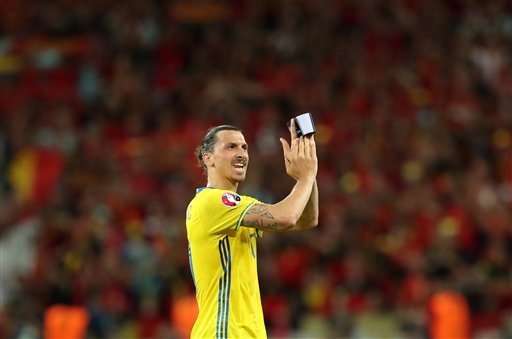 NICE, France, June 23: Zlatan Ibrahimovic chested the ball down, let it bounce and hit it. Wide.

His 86th-minute attempt for an equalizer in Wednesday's 1-0 loss to Belgium at the European Championship showed the technique and flair that had made Ibrahimovic a star.
But his farewell game for Sweden wasn't to have a fairytale ending.

The Swedes were eliminated from the competition while Belgium advanced to the round of 16, where it will play Hungary on Sunday in Toulouse.

Coach Erik Hamren, who is also leaving the national team, said: "I hoped we could have a better finish" for Ibrahimovic, who retires from international football with 116 caps and a Swedish-record 62 goals.

Radja Nainggolan scored the winning goal in the 84th minute with a fierce shot from outside the area as Belgium finished second in Group E. Italy won the group despite losing 1-0 to Ireland, who also advanced as one of the best third-place teams.

With Ireland winning, Belgium would have been eliminated by losing to Sweden.

"It was a very difficult game for people who have heart problems," Belgium coach Marc Wilmots said. "Tactically, we were better on the counter. They have two very big, but slow center backs so I think our counterattack was very good."

Ibrahimovic, one of the biggest stars at Euro 2016, played his last game for his country a day after saying that he was retiring from international football after the tournament.

"He's special. He's unique. But I hope we can find some other player who's not Zlatan but a really, really good player for Sweden," Hamren said. "I don't think that in a small country like Sweden you find another player like him because he's really, really unique."

Needing a win to advance, Sweden also came close with an early shot from Marcus Berg, but failed to create enough quality opportunities. Shortly before the winning goal, a header from Andreas Granqvist was cleared off the line by Kevin de Bruyne.

"We've kept a clean sheet two times in a row and it makes a difference. You know the problems we had," Wilmots said. "Some people thought we were dead after the first game, but we're here. We're back on track."

MADRID, May 28: The Luis Enrique era in Barcelona came to an end with the coach lifting one last trophy.... Read More...