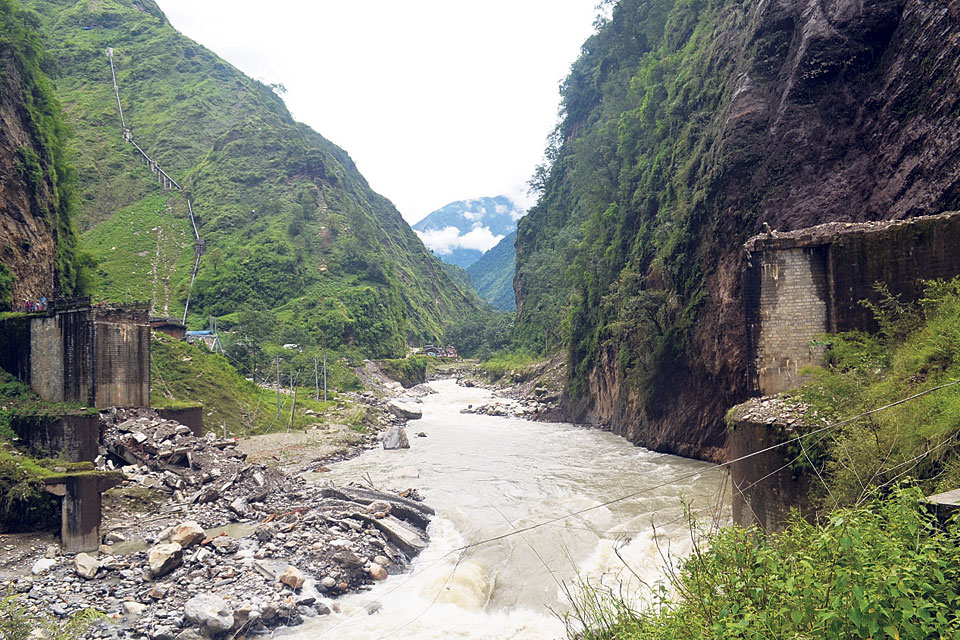 SINDHUPALCHOWK, July 24: With the Larcha Bridge over Bhotekoshi River broken and washed away by landslide on Sunday evening, Tatopani area has been isolated from the rest of the country. The bridge, a part of the Araniko Highway, was the connection of Tatopani with the rest of the country. Incessant rain throughout the day and the night earlier had triggered the landslide that broke bridge.

According to DSP Bimal Dangi of the Armed Police Force, the landslide had broken the bridge into two pieces. “When the bridge was broken into two pieces it fell into the river. Because of it, the river was blocked for nearly a minute,” Dangi said. “However, the water forced its way through the blockade and washed away the bridge’s parts instantly,” he added.

“When the rocks were falling over the bridge, we heard the sound. But than we thought that it was a small landslide. Later we went near the bridge with our flashlights and saw the bridge was broken and being swept away by the floods,” Dangi said. “It happened at around 7.40 in the night,” he added.

The landslide had fallen from around 200 meters up the mountain. Following the incident, the APF has issued restrictions on vehicles from plying along the route on either sides of the bridge citing further risk of landslides, Dangi informed Republica.

Before this also the bridge over Bhotekoshi River is washed away. In 1982 the bridge over it was broken and flooded away. The bridge was constructed by the government of China, a year earlier.

“The mountains were weakened by the earthquakes. Insistent rainfall for the past few days in the area further weakened them and triggered the landslide,” narrated geologist Shreekamal Dwivedi adding that a huge part of the mountain had detached and fallen down on the bridge forcing it to break down.

Sindhupalchowk was one of the worst hit districts during the earthquake of April 2015. It had taken much longer time for Tatopani and other areas of the district to come to normalcy post earthquake as compared to other districts that were hit hard by the quake. Businesses had come to a halt in the district for a long time. Along with the local population, even army and police barracks were affected.

“Earthquake had meted severe damages across the district back then. Mountains’ structure were shaken and weakened to the point that a little force could trigger huge landslides. Since then, the entire area has remained fragile,” Dwivedi said. “So, there is need to remain alert, especially during heavy rainfall,” he added.

Dipendra Shrestha, Tatopani’s ward chairperson lamented the sorry state of Tatopani. Locals have now been restricted once again from reaching out to cater to their daily needs, he said. Without the bridge, people cannot make out even to the nearest market or elsewhere.

“We need the bridge for traveling. Its lack has now limited us to our home,” he said adding that in the past the road used to get blocked by small landslides but this time with the whole bridge destroyed and swept away it will be very hard for the people to cope.

He fears that locals might face food scarcity very soon, if alternatives are sought immediately. The residents have called on the government for coming forward with immediate solution to their problems.

“We will be facing shortage of basic commodities and food in the next few days. Apart from that without the road, where will we go in case of medical emergency?” Shrestha questioned in an attempt to elaborate on the scope of the problem that they will be facing.

Chief District Officer for the district, Antar Bahadur Silwal, informed that initiatives have been taken for resumption of transportation service in Tatopani. “As a temporary measure we are mulling on constructing a suspension bridge over the river so that locals can cross the river and fulfill their basic needs,” he said. “Such a bridge is the best possible emergency alternative for now. I have talked with concerned authorities for availing required resources to build it.”

Shrestha further informed that residents of Baseri, Daklang, Hindi, Jhirpu, Khokundol and Larcha are still under high risk of landslides and called on concerned authorities to take appropriate to ensure their safety.