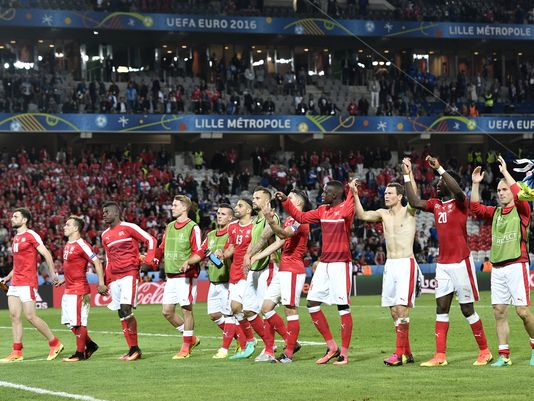 PARIS, June 25: Led by prolific Bayern Munich striker Robert Lewandowski, Poland was the top scoring team in qualifying for the European Championship with a remarkable 33 goals in 10 games.

At Euro 2016, that firepower has completely fizzled out.

After scoring 13 goals in qualifying, Lewandowski has failed to find the net so far and his team has managed just two goals in its three matches. Only Ukraine, Sweden, Albania and Austria scored fewer goals in the group stage - and all four of those teams have been eliminated.

Instead, it's Poland's tight defense that has helped the team into the knockout stage of a European Championship for the first time, keeping three clean sheets in as many games.

Lewandowski gets a chance to end his scoring drought in Saturday's game in Saint-Etienne against Switzerland, a team with similar strengths and weaknesses to Poland.

However, he will have to rediscover his clinical touch in front of goal.

The Bayern forward missed a clear opportunity against Ukraine, with substitute Jakub Blaszczykowski sealing Poland's progression to the last 16. Though it was Lewandowski's fourth consecutive international match without a goal, Poland coach Adam Nawalka is not worried by the lack of a cutting edge.

"That Lewandowski hasn't scored yet is not a problem whatsoever," Nawalka said after his team finished second in Group C behind world champions Germany on goal difference.

"He is doing a lot of hard work and has had a big influence on our wins and how we have played - he's incredibly important for us. He's a player who can help us. He plays in a supportive way throughout. It's just a matter of time for him, he's creating a lot of chances, and I think he'll score in the next match."

At the other end of the pitch, Poland's disciplined defenders have proved a lot more reliable.

The center back pairing of Kamil Glik and Michal Pazdan excelled in the 0-0 draw with Germany and Pazdan turned in another inspirational display when Poland was pinned back by Ukraine.

"There is not a single team we can't compete with," Pazdan said. "Four years have gone by since Euro 2012. I've changed as a player and the team has changed too. We've improved a lot."

Switzerland will also be making its maiden appearance in the knockout round at a European Championship, with a team boasting the same defensive qualities as Poland.

Fabian Schaer and Johan Djourou make a solid center back pairing, while keeper Yann Sommer turned in a man of the match performance in the 0-0 draw against host nation France. Arsenal's new recruit Granit Xhaka bosses the midfield, but like Poland, Switzerland has only scored twice at the tournament.

Midfielder Xherdan Shaqiri, the team's leading player, has been limited to just one assist and was substituted against France, while Haris Seferovic's profligacy combined with teenager Breel Embolo's inexperience remains a concern for coach Vladimir Petkovic up front.

"Maybe something is still missing," Petkovic acknowledged after the goalless draw with France last week. "But we now have time to recover and improve those things."