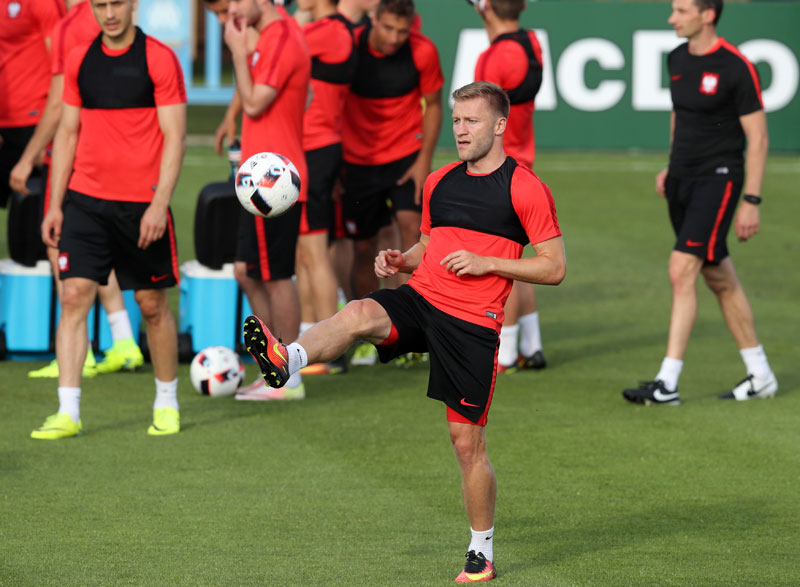 ROBERT LEWANDOWSKI
The star striker is making headlines for the wrong reasons in France. After scoring 13 times in qualification — more than any other player in the competition — Lewandowski is goalless at Euro 2016. The Bayern Munich striker has never stopped working and his runs have opened up space for teammates — coach Adam Nawalka has said he is doing "phenomenal work" in that role — but he will be keen to get off the mark against Portugal.

JAKUB BLASZCZYKOWSKI
Poland may only have scored three times in four games, but Blaszczykowski has been the standout player in attack, scoring goals against Switzerland and Ukraine, in the latter game as substitute. He set up Poland's only other goal at Euro 2016 with a pinpoint cross for Arkadiusz Milik in its Group C opener against Northern Ireland. With Lewandowski often marked intensely, Blaszczykowski could be key. Poland has never lost a game when Blaszczykowski has scored.

LUKASZ FABIANSKI
He wasn't Poland's first-choice goalkeeper when the tournament started, but Fabianski has become a key member of the team since Wojciech Szczesny hurt his thigh in the first game. He kept clean sheets against world champion Germany and against Ukraine. The only goal he has conceded outside a penalty shootout was the spectacular overhead kick scored by Switzerland's Xherdan Shaqiri in the round of 16. He didn't need to make a save in the 5-4 shootout win over the Swiss, the only miss coming when Granit Xhaka skewed his spot kick wide of the post.

GRZEGORZ KRYCHOWIAK
The defensive midfielder's boundless energy has been crucial for Poland, which has only conceded one goal in open play — Shaqiri's stunner. In attack, his smart passing helped the team to dominate Northern Ireland, earning him a man-of-the-match award. Krychowiak, a two-time Europa League winner with Sevilla, also blocked out the pressure to score the decisive penalty in the shootout against Switzerland.

BARTOSZ KAPUSTKA
Poland's youngest player at just 19 years, Kapustka put in an eye-catching performance in his team's 1-0 opening win against Northern Ireland, earning plaudits from former England defender Rio Ferdinand, who called him a "very clever, composed and skillful player," in comments on Twitter. Former England striker Gary Lineker labeled Kapustka a "deliciously talented 19 year old." But since then, Kapustka has only showed fleeting glimpses of that talent and missed the Switzerland game through suspension.