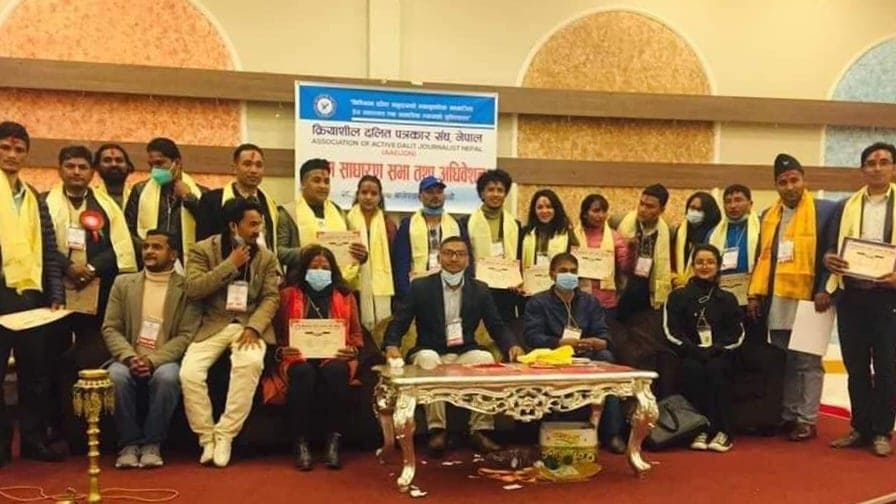 KATHMANDU, Jan 14: Journalist Pabitra Sunar has been elected as the president of ‘Kriyasheel Dalit Patrakar Sangh’ for a second term. A founder member of the organization, Sunar was chosen its president unanimously even earlier. The organization which aims to promote Dalit issues and Dalit media persons had elected Sunar and a few others its key positions amid its first general assembly held in the capital on Tuesday. The meeting also formed a 17-member committee during the program.

According to Sunar, who is associated with Nagarik daily for over a decade, the situation of Dalit population as well as journalists from Dalit community is poor and their access to opportunities is limited. Even though equality is enshrined in the constitution, the same is not reflected in the real lives of the people like her and her peers.

“We still strive to feel equal. As commoners or as journalists, we continue to feel the heat of discrimination. We have to fight against it mutually and create a just society,” she said.

The assembly that was graced by Information and Technology Minister Parbat Gurung elected journalists Keshab Bhul and Keshar Gadaili as its vice presidents. Similarly, reporter Bishwas Khadgathoki was elected general secretary of the organization.

Speaking at the event, Minister Gurung said that there will be high relevance of Dalits’ voice till society practices caste-based discrimination. “Had our society been inclusive, there would not be any need for such organizations. But since we are far from such kind of inclusion and equality, they are relevant,” he noted.

The assembly declared to fight more dedicatedly for human rights, justice and opportunities of the Dalit community.

In case you missed them here are some of the major stories Republica covered over the past 24 hours. ... Read More...

KATHMANDU, Jan 3: The Bibeksheel Sajha Party has stated that its serious attention was drawn over the issue of alleged... Read More...

President Bhandari emphasizes on role of law education for promotion of rule of law
8 hours ago
Rs 10,000 fine slapped on Rajpur's mayor for not providing information
9 hours ago