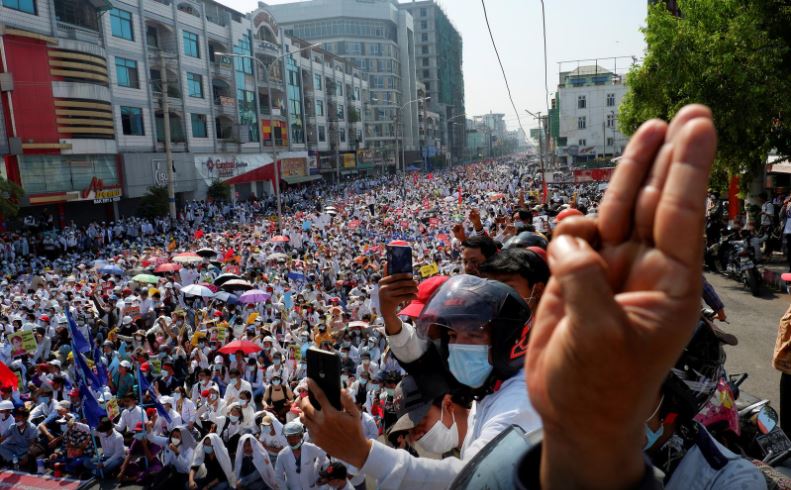 MYANMAR, Feb 22: Myanmar police began to disperse pro-democracy protesters on Monday as businesses around the country shut in a general strike called to oppose the military coup despite a threat from authorities that confrontation could cost lives.

Three weeks after seizing power, the junta has failed to stop daily protests and a civil disobedience movement calling for the reversal of the Feb. 1 coup and release of elected leader Aung San Suu Kyi.

There were protests in cities and towns across the country on Monday, from the northern hills on the border with China to the central plains, the Irrawaddy river delta and the southern tip of the panhandle, images on social media showed.

In the capital, Naypyitaw, where the military is headquartered, a police water cannon truck and numerous other vehicles closed in to break up a procession of chanting protesters who scattered when police on foot chased them, wrestling several to the ground.

The response of security forces this time has been less deadly than in crackdowns in earlier phases of turmoil in almost half a century of military rule but three protesters have been killed - two shot dead in Mandalay on Saturday, and the first, a woman shot in Naypyitaw, who died on Friday.

The army has said one policeman died of injuries sustained in the protests.

Late on Sunday, state-owned media MRTV warned that protesters they could get killed.

“Protesters are now inciting the people, especially emotional teenagers and youths, to a confrontation path where they will suffer loss of life,” the broadcaster said.

Facebook said on Monday it had removed MRTV’s pages for repeated violations of its standards, including its violence and incitement policy. On Sunday, it deleted the military’s main page for the same reason.

The junta’s warning didn’t discourage people from turning out in their tens of thousands.

In a country where dates are seen as auspicious, protesters noted the significance of the date 22.2.2021, comparing it with demonstrations on Aug. 8, 1988, when a previous generation staged anti-military protests that were bloodily suppressed.

“Everyone is joining this,” said San San Maw, 46, at the Hledan junction in the main city of Yangon, which has become a rallying point for the protests. “We need to come out.”

Police later lined up, apparently in preparation to disperse protesters from another site in Yangon, outside a U.N. office, a Facebook feed from the Eleven media outlet showed.

Speaking earlier, Htet Htet Hlaing, 22, said she was scared and had prayed before joining the demonstration, but would not be discouraged.

“We don’t want the junta, we want democracy. We want to create our own future,” she said.

Author and historian Thant Myint-U said the window for a peaceful resolution was closing.

“The outcome of the coming weeks will be determined by just two things: the will of an army that’s crushed many protests before and the courage, skill and determination of the protesters (much of society),” he said on Twitter.

Authorities were “exercising utmost restraint”, the foreign ministry said in a statement. It rebuked some countries for remarks it described as flagrant interference in Myanmar’s internal affairs.

Several Western countries have condemned the coup and decried the violence against protesters.

U.S. Secretary of State Antony Blinken said on Twitter the United States would continue to “take firm action” against authorities violently cracking down on opponents of the coup in the Southeast Asian country that is also known as Burma.

“We stand with the people of Burma,” he said.

“Release the prisoners. End the violence. Respect human rights, and the will of the people expressed in recent elections,” Guterres said at the U.N. Human Rights Council in Geneva.

U.N special rapporteur on human rights to Myanmar, Tom Andrews, said he was deeply concerned by the junta’s warning to protesters.

“Unlike 1988, actions by security forces are being recorded and you will be held accountable,” he said on Twitter.

The army seized power after alleging fraud in Nov. 8 elections that were swept by Suu Kyi’s National League for Democracy (NLD), detaining her and much of the party leadership. The electoral commission dismissed the fraud complaints.

Myanmar’s Assistance Association for Political Prisoners said 640 people have been arrested, charged or sentenced since the coup - including former members of government and opponents of the army takeover. 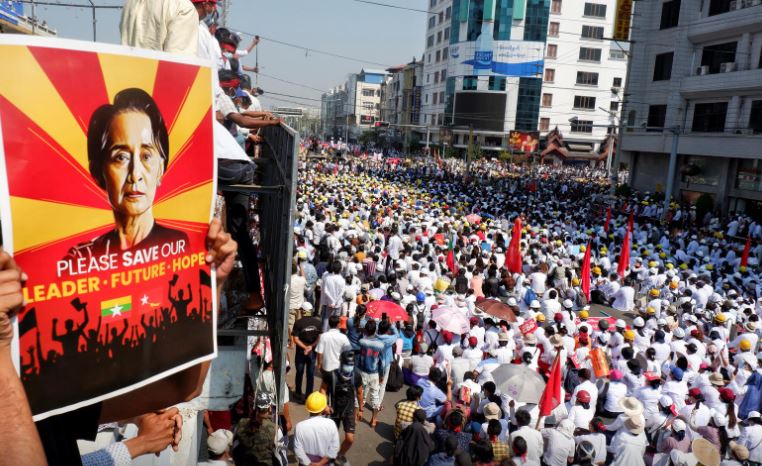 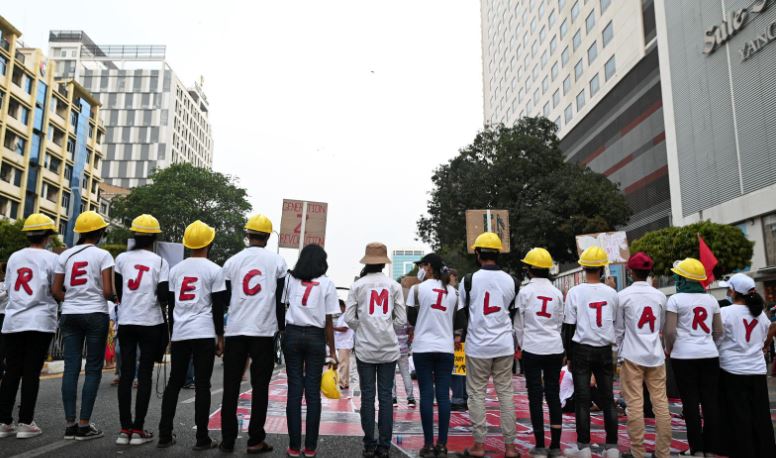 Myanmar police crack down on protests for second day; at least five dead