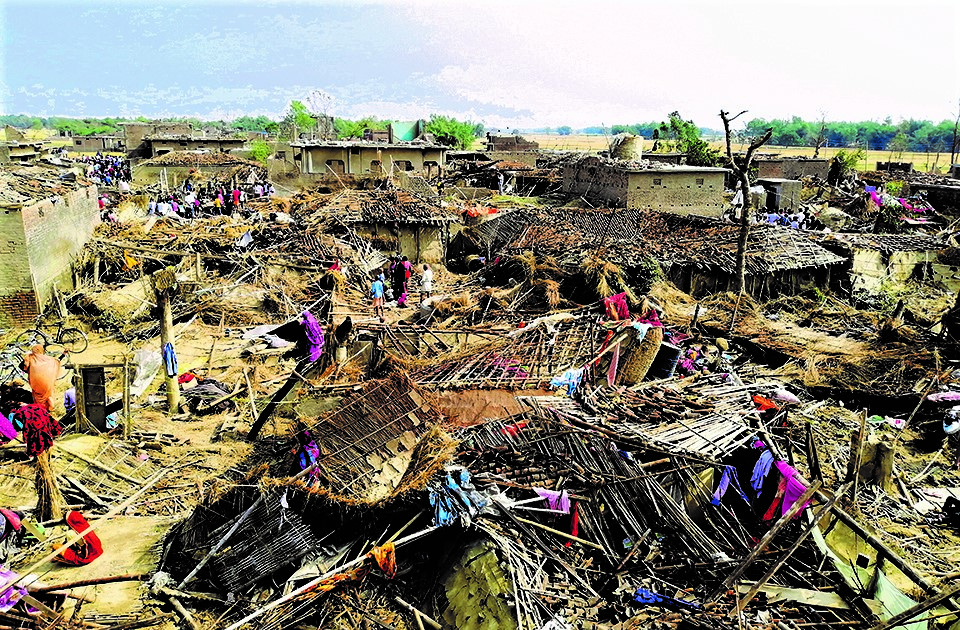 PURAINIYA (BARA), April 2: Local authorities have confirmed at least 28 dead including 11 women and six children in the rainstorm that wrecked havoc in parts of Bara and Parsa districts on Sunday evening. The dead include 27 in Bara and one in Parsa .

Those currently under treatment at various hospitals include 116 in Narayani Hospital, 100 in National Medical College, 39 in Birgunj Health Care center and 20 others in Gandak Hospital. Similarly, 38 injured are undergoing treatment at Bara District Hospital in Kalaiya and 2 in Tarai Hospital, according to DAO officials.

According to the Ministry of Home Affairs (MoHA), nine critically injured were airlifted by army helicopter to Kathmandu on Monday. They are undergoing treatment at TU Teaching Hospital, Maharajgunj.

Most of the injuries occurred when the houses, both thatched and mason-built, collapsed in the storm. Locals said the number of injured is high as there was no question of running away from their homes during the storm. Medical teams from army and police have been deployed in the affected areas, MoHA said.

While three villages—Purainiya, Bharbaliya and Bhaluhi Gachhiya — in Bara were severely hit by the storm, several others villages in Bara and Parsa were partially affected . It is estimated that over 400 houses were completely destroyed in the three most affected villages, leaving thousands homeless. The storm also affected hundreds of livestock and cereal and vegetable crops.

Prime Minister K P Sharma Oli along with his cabinet colleagues visited Bara and Parsa to inspect the storm damage and talk to victims. Oli canceled programs scheduled in Jhapa district for Monday. He visited various hospitals and interacted with the victim families after making an aerial inspection of the devastation.

Various individuals and social organizations have stepped up relief and rehabilitation work for those affected . Hundreds donated blood as there was a shortage of blood for the injured . Over 300 pints was collected in Birgunj, according to chief of Blood Bank of Nepal Red Cross Society Shaubha Raj Pandeya.

Nepal Army, Armed Police Force and Nepal Police personnel have been deployed to remove storm debris and rescue the injured .

With most houses in the affected areas heavily damaged, thousands are worried about shelter during night. Local authorities and various social organizations as well as individuals have provided food for the displaced .

In Birgunj, Mayor Vijaya Sarawagi has made necessary arrangements to feed those undergoing treatment at city hospitals . Drinking water, fruit juice and biscuits were provided on Monday morning.

Officials at Pheta Rural Municipality, one of the most affected , said they have begun making necessary arrangement for food , tarpaulins and lighting. As the numbers of curious coming to see the condition of the victims have increased, the victims said it is a challenge keeping their belongings safe.

The Province 2 government is to provide Rs 300,000 each to the families of those killed and free of cost treatment to the injured as well as support for rebuilding damaged homes. “We have decided to step up relief and rehabilitate efforts without delay for those displaced ,” said Province 2 Minister for Physical Infrastructure Development Jitendra Sonal, who reached the affected areas to talk to the victims.

Home Secretary Prem Kumar Rai, who was accompanied by Nepal Police chief Sarbendra Khanal, Armed Police chief Shailendra Khanal and chief of National Investigation Department Ganesh Adhikari during a visit to Bara and Parsa Monday, assured victims that the federal government would see to rebuilding damaged infrastructure. Talking to victims in Purainiya in Bara , Rai also said the government would collect details of the loss in coordination with local and provincial governments and provide compensation to the victim families.

Health workers from Chitwan to reach out to storm survivors

BHARATPUR, April 1: A team comprising doctors and health workers will be dispatched to the districts hit by a massive... Read More...