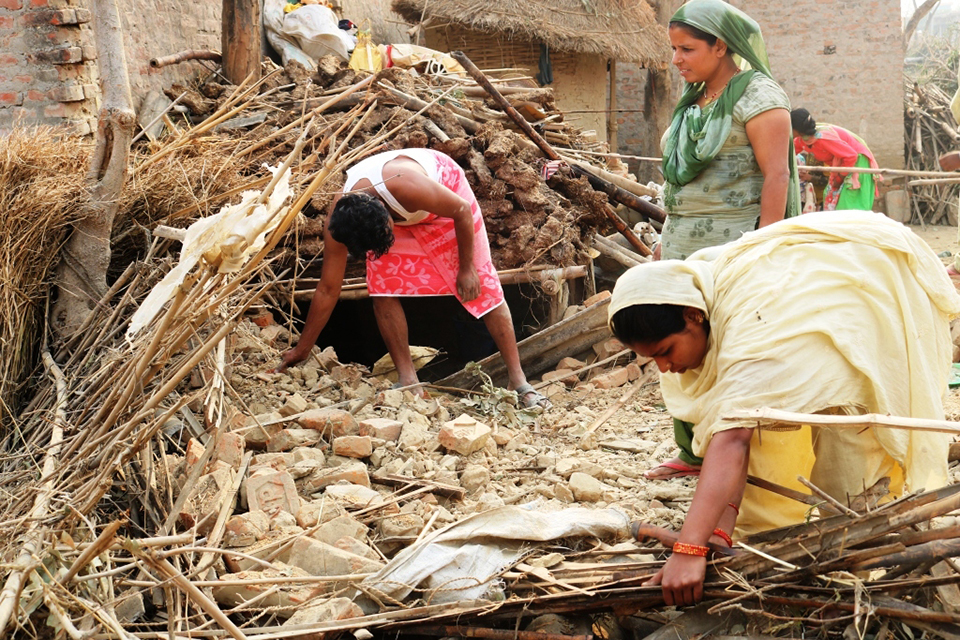 Family members of Mutakiya Miya of Purainiya clearing debris in front of his house.

BARA, April 10: The menacing tornado of last Sunday wrecked hundreds of houses in Bara and Parsa districts compelling many households to live under the open sky on empty stomachs. After crying over their loss for days, the victims have now started repairing their houses by clearing up the debris.

They say it is difficult for them to spend their days under the makeshift tents until the government offers them safe shelter. Therefore, instead of waiting for the government, the victims found it more convenient to repair their own homes. Mohammad Hussain of Kalaiya Sub-Metropolitan City-13 has started engaging himself in repairing his house.

"It's better to live in our own homes rather than under the open sky," said Hussain, adding, "It might take a much longer time if we wait for others to repair our house. So, we decided to build our houses on our own." According to him, his house will provide him better protection in case of rain or hailstorm if repaired properly. The first-ever recorded tornado of Nepal has cracked all the walls of his four-room house.

Another victim Bishwanath Thakur has also started repairing his house. Even though the victims received relief from various government and non-government organizations, none of them have paid attention toward arranging safe shelter or repairing the houses of the victims. Altogether 53 houses were damaged by the tornado in Fulbariya.

Since a few days, Dhaneshwar Ram of Hardiya has started engaging himself in collecting bricks and tiles of repairing his damaged house. Though all five members of his family were able to escape unhurt, Ram fears that they might get injured due to the scattered stones and bricks in their settlement. So, he decided to clear up the debris. A total of 176 houses were destroyed by the calamity in Hardiya alone.

Like other victims, Manjur Alam of Purainiya has started repairing his house. As managing a family of 16 became almost impossible in a small makeshift tent made by Nepal Army, he found it better to repair his own house. He lost two of his family members in the disaster.

After waiting for about a week, victims in various disaster-affected villages have started repairing their damaged homes.

PURAINIYA (BARA), April 2: Local authorities have confirmed at least 28 dead including 11 women and six children in the rainstorm... Read More...