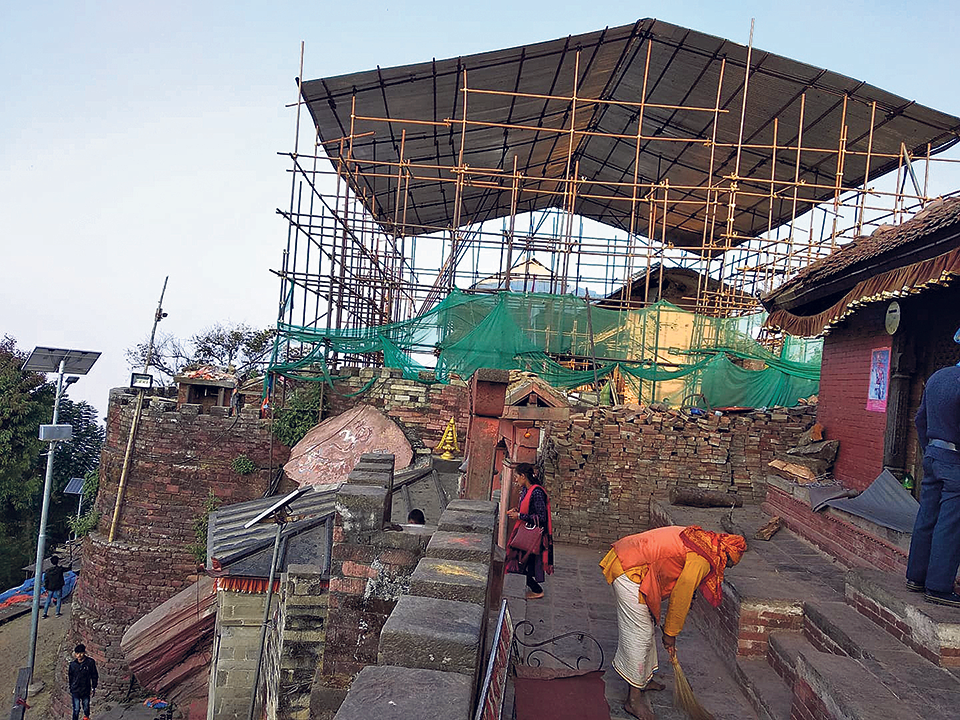 GORKHA, Dec 15: Negligence by contractors has halted the reconstruction of the historical Gorakhkali Temple. As per the agreement, the construction should have been completed within a year but the repeated halt in the work has made it almost impossible.

Recently, workers had begun fixing the windows of the temple but the work remains stalled now. This is, however, not the first time the construction work has been halted. As Gorkha is one of the most-preferred destinations for educational trips, the snail-paced reconstruction of the temple has mostly disappointed the students.

Construction materials have been piled up around the Gorakhkali Durbar, the historic palace of the Shah kings. There is no way to get inside. Thousands of students visit Gorkha to understand the history related to King Prithivi Narayan Shah, the founder of modern Nepal. Lately, their excursions have been meaningless as they cannot visit the Gorkahkali temple and the room used by King Prithivi Narayan Shah.In the past, it used to take at least an hour for students to completely visit the palace but now it is not even a 10-minute walk. Looking at the pace of reconstruction, it seems like the palace will not be ready even for the next excursion season. As the monstrous earthquake of 2015 destroyed the palace, it is being reconstructed from the foundation.

The Department of Archaeology decided to sanction a budget for the reconstruction of the palace in order to assure that this important site never loses its value. The department has signed the reconstruction deal with Pachlishivako JV for Rs. 43 million. The department had demolished the palace completely to rebuild it from the base. This has compelled the pilgrims to return by worshiping the stones and remnants of the palace.

Gorkha Durbar was constructed during the reign of King Ram Shah in the 16th century. Seven more Shah kings including Prithivi Narayan Shah ruled the state by staying in the palace. This 400 years old palace will be rebuilt in the original style and structure. The earthquake of 1934 could not wreck the palace but the catastrophic earthquake of 2015 reduced it to rubble.The remaining art and structures of the palace have been protected under zinc plates.

Women's rights only on paper, law-enforcement limited to cities
3 minutes ago

Seven arrested for trying to rob tourist
25 minutes ago