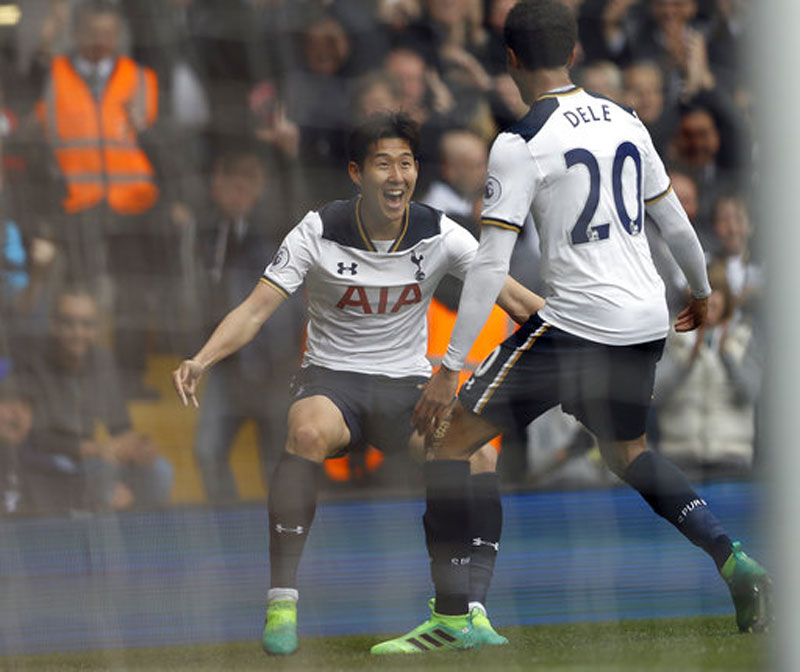 LONDON, April 16: Unlike last season's title race, Tottenham knows it isn't on the wrong side of a popularity contest in its pursuit of Chelsea.

Leicester was the undoubted pick of the neutrals as it fought off Tottenham's challenge to improbably collect the Premier League trophy last May.

Now Tottenham occupies the role of the underdog, sitting four points behind Chelsea after swatting aside Bournemouth 4-0 on Saturday.

"We expended a lot energy fighting against Leicester, but against West Brom, against Chelsea, against the media," Tottenham manager Mauricio Pochettino said, recalling last season's late costly draws against West Bromwich Albion and Chelsea. "We fought against everyone, but now we are focusing on fighting our opponents when we play.

"Then we spend time and energy on preparing ourselves to compete in the best way. We have improved a lot, from the beginning of the season that was our chance to improve our mentality, our belief and I think you can see the group and the team have improved."

If Chelsea can be chased down in Spurs' remaining six games, Tottenham would be crowned champions for the first time since 1961, and etching another new name in the Premier Leaguetrophy. A triumph for Chelsea, which is at Manchester United on Sunday, would be far less enchanting, given the west London club has won the league four times since 2005.

All Tottenham can do is keep racking up the wins — Saturday's was the seventh in a row — and raising the goal-difference advantage over Chelsea in case it matters. Tottenham has a six-goal edge over Chelsea by that reckoning after another irresistible performance on Saturday that produced a club-record 12th straight home win.

Even substitute Vincent Jansson managed to score his first goal from open play eight months into the misfiring striker's first Premier League campaign, wrapping up the victory in stoppage time. It was opened by Mousa Dembele scoring his first goal of the season in the 16th minute, ghosting into the penalty area unmarked to meet Christian Eriksen's corner.

Inside three minutes, Son Heung-min put the ball through goalkeeper Artur Boruc's legs for his 19th goal of the campaign to become the highest-scoring South Korean in a single European season since Cha Bum-kun for Bayer Leverkusen in 1985-86.

Tottenham has dispelled notions it is over-reliant on Harry Kane by continuing to thrive during the top-scorer's injury absence. Naturally, though, on his first start in almost five weeks, Kane netted his 25th goal in all competitions this season three minutes into the second half. It's the third successive year that Kane has hit 20 league goals in a season.

"The only way to build that winning mentality is to always play in the same tempo, with the same focus during the 90 minutes," Pochettino said.

Tottenham has a seven-point edge over Manchester City, which went third by beating Southampton 3-0. Captain Vincent Kompany headed in the opener in the 55th minute with his first goal in 20 injury-ravaged months before Leroy Sane and Sergio Aguero scored.

Here's a look at the rest of Saturday's Premier League action:

Sunderland 2-2 West Ham
There's still a chance Sunderland could avoid the drop, but it's an unlikely prospect even after Fabio Borini came off the bench to rescue a point in the 90th. The Italian scored two minutes after replacing the concussed Billy Jones, who was carried from the pitch while being given oxygen.

With six games remaining, though, Sunderland is nine points from safety but it has a game in hand over Hull — the team directly above the drop zone.

After Borini's late leveler, West Ham finished with 10 men after Sam Byram was dismissed in the fifth minute of stoppage time after being shown a second yellow card.

Crystal Palace 2-2 Leicester City
Crystal Palace recovered from two goals down to move seven points clear of the relegation zone. Goals from Leicester duo Robert Huth and Jamie Vardy were canceled out by Yohan Cabaye and Christian Benteke. Leicester has mounted a feeble defense of its title — sitting 12th — but it is England's last Champions League participant and hosts Atletico Madrid on Tuesday in the quarterfinals. The Foxes are only 1-0 down from the first leg.

Hull remains two points above the relegation zone after 11th-placed Stoke ended its four-game losing run with a win that was wrapped up by Xherdan Shaqiri striking into the top corner from 30 yards (meters) with 10 minutes remaining.

Swansea is two points behind Hull in the third relegation place after a fifth loss in six games. Etienne Capoue secured the victory for a Watford side which is all but assured of avoiding the drop.

Vincent Kompany's first goal in 20 injury-ravaged months helped  Manchester City to a 3-0 win at Southampton on Saturday, lifting the team to third in the Premier League.

Kompany marked his latest return to the City defense by heading a 55th-minute opener before Leroy Sane and Sergio Aguero also contributed goals.

"It's always a long journey back," Kompany told BT Sport television. "I would like to have been injured less in my career but every single time I put in the hard work I don't really complain too much about what's happening to me and I just carry on.

City wrapped up the win with two goals in three minutes.

David Silva sent Kevin De Bruyne through and the midfielder squared for Sane to sweep past Forster for his ninth goal of the season in the 77th minute. Then De Bruyne chipped the ball into the Southampton six-yard box where Aguero headed in at the far post as City eased to a second successive win.

The 2012 and 2014 champions are looking to lock down a return to the Champions League and Pep Guardiola's side moved a point ahead of Liverpool, which occupies the fourth qualification spot. Everton and Manchester United are six points further back.

Taleju Bhavani Temple opened for a day
21 hours ago

Retreating Russians leave their comrades’ bodies behind
9 minutes ago