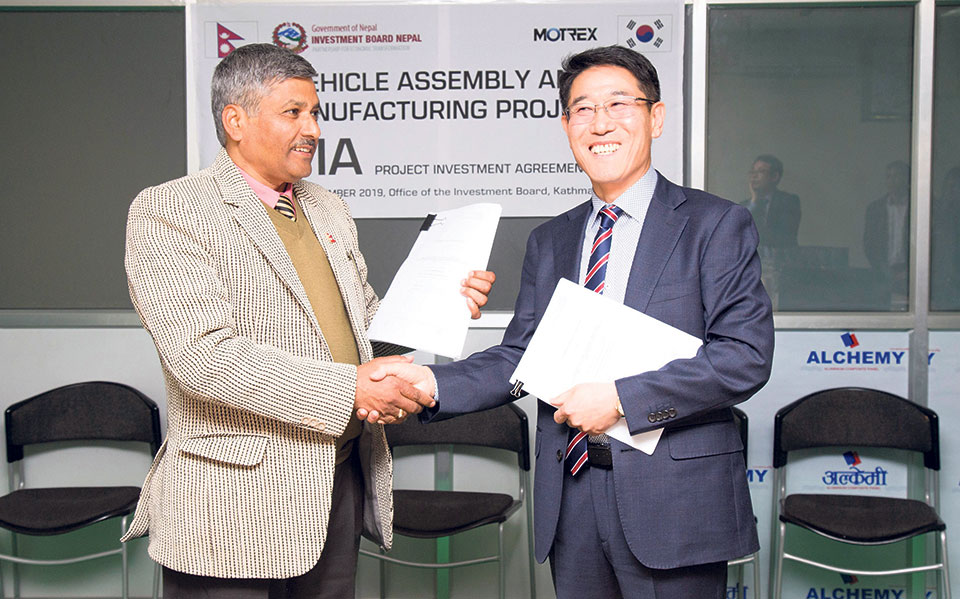 FDI worth Rs 12 billion to assemble 1,000 vehicles per year
KATHMANDU, Dec 12: The Office of the Investment Board of Nepal (IBN) has signed an initial agreement with a South Korean company, Motrex Co Ltd, for an investment worth US$ 105 million (approximately Rs 11.95 billion at Wednesday's exchange rate) for setting up a plant in Nepal to assemble four-wheeler vehicles in the country.

Following three rounds of negotiations with the company for nearly nine months after approving its proposal for the project in mid-March, the IBN had initiated the agreement process.

Maha Prasad Adhikari, CEO of the IBN, told Republica that they have finalized the project investment agreement with Motrex, subject to approval from their respective boards.

The agreement will pave the way for the South Korean company to set up the four-wheeler assembling plant in the country. The company plans to manufacture four-wheelers in Nepal in the long-run, according to IBN officials.

The company is mainly engaged in manufacturing and distribution of automotive parts. Its products include audio-visual navigation (AVN), audio video (AV), around view monitor, head up display and rear seat entertainment (RSE).

Under this project, the company will import vehicle parts for assembly in Nepal. The company has a target to assemble 1,000 four-wheelers in the first year of operation. The environmental impact assessment and plant set up will take nearly three years.

However, the company had set forth some conditions for investment in Nepal.

“The company has some conditions, but we have found a way-out for most of them,” said Adhikari.

The IBN has declined the company's contentious condition of infant industry protection for seven years in an attempt to block any competitor for certain period of time.

Likewise, the board also turned down the company's demand for entry restriction of competitors investing below Rs 10 billion.

“We convinced Motrex that market competition was in their interest. They agreed to drop those conditions,” said Adhikari.

Auto dealers in Nepal had opposed those conditions restricting entry of competitors.

According to IBN officials, the Korean company has been seeking 10% to 15% waiver on the import and excise duties of equipment, machinery or any other parts needed for the assembling of four-wheelers in Nepal. The IBN is undecided about it.

“We are positive toward providing such waiver on the import of certain equipment, machinery or parts. We have agreed that we will address the demand of tax break through a separate act,” said Adhikari.

Though officials did not specify, the company, after a certain period of time, will have to use at least 30% of local materials in its assembled products.