KATHMANDU, Jan 19: South Korean President Moon Jae-in on Sunday said that his government will do its best to find the missing South Korean trekkers in Annapurna region of Nepal.

On Twitter, the South Korean President said “I, along with the South Korean people, earnestly pray for the speedy rescue of the missing teachers and local guides at Annapurna. With the Seollal (Korean Lunar New Year) holiday a week away, I am anxious, thinking of those missing, fighting for life, and their families. We will work closely with the Nepali government and do our best to search and rescue them. "

He said that he and his government will do their best to provide consular support to the families of the missing trekkers.

"I express my deep consolations to the families who are waiting for their return. It is even more regrettable that they were on an education volunteer program," he further said. 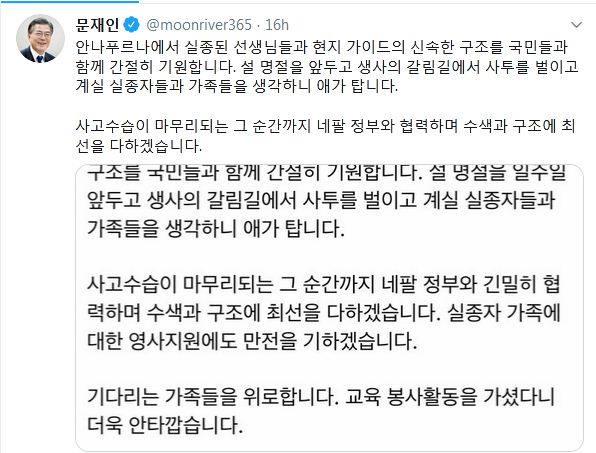 Ministry of Foreign Affairs of South Korea on Saturday confirmed that four South Korean trekkers went missing after an avalanche hit the circuit trekking route of Annapurna in Nepal.

A South Korean emergency team comprised of officials at the foreign ministry and the education office, as well as those from the tourist agency, arrived in Nepal today. Six members of the affected people's families accompanied the officials.

The South Korean mission in Nepal has requested active search operations in the area to the local authorities and vowed utmost efforts to provide necessary support to the families of the victims, according to media reports.

POKHARA, Jan 17: Several Chinese and Korean nationals along with their guides have gone out of contact after an avalanche... Read More...