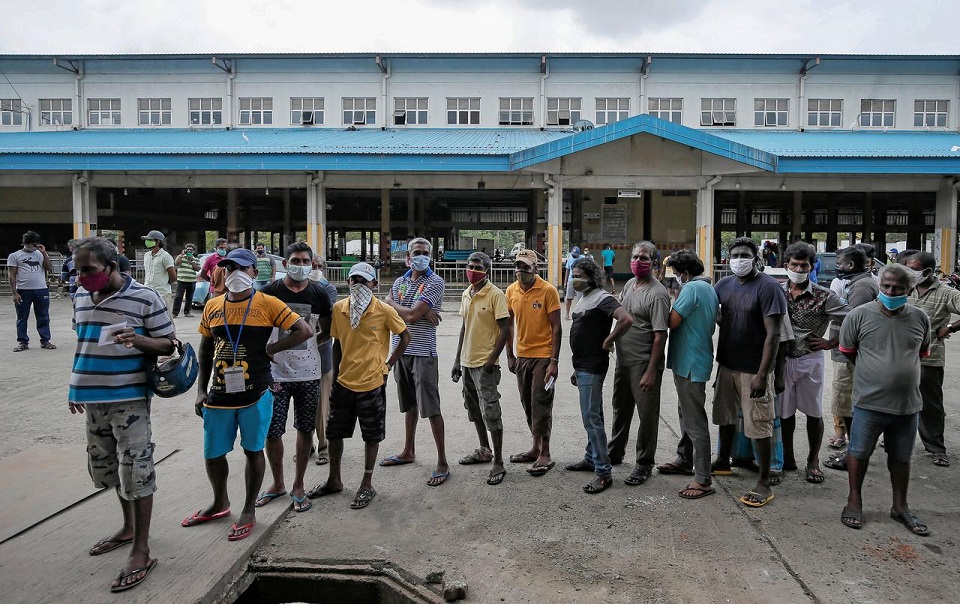 People stand in a line waiting for their turn as health officials use swabs to collect samples at a building during the curfew amid concerns about the spread of the coronavirus disease (COVID-19), in Colombo, Sri Lanka, April 22, 2020. REUTERS/Dinuka Liyanawatte

NEW DELHI, April 23: South Asia’s coronavirus infections have crossed 37,000, with more than half in India, official data showed on Thursday, complicating the task of governments looking to scale back lockdowns that have destroyed the livelihoods of millions.

Authorities in India sought this week to ease a stringent 40-day lockdown of the population of 1.3 billion by allowing farm and industrial activity in the least-affected rural areas.

But more than 1,400 new cases reported on Wednesday, for one of India’s biggest single-day jumps in recent weeks, carried its tally to 21,392 infections.

“We have to remain focused in this fight, the effort is to stop the spread at any cost,” said Satyendra Jain, the health minister of Delhi, one of India’s top three virus hotspots.

“If we want to end the lockdown, we have to bring down the number of red zones.”

In neighboring Pakistan, which has roughly half as many cases like India, Prime Minister Imran Khan tested negative for the virus, the information and broadcasting minister said.

Khan was tested after a meeting last week with the head of one of the country’s biggest charity organizations, who later proved to have the virus.

“I am happy to report that his test is negative,” said Firdous Ashiq Awan, the minister.

But the concern is growing over Pakistan’s move, in response to appeals from religious groups, to allow mosque gatherings during the Muslim holy month of Ramadan, despite experts’ warnings that they could feel the uncontrollable spread of the virus.

The fasting month is expected to begin on Friday.

Until now, South Asia, home to a fifth of the world’s population, has suffered fewer infections in the pandemic than rich nations such as Britain, Spain, and the United States.

But that could be the result of lower rates of testing that health experts believe may allow the virus to lurk undetected.

“We have repeatedly said there is no alternative to testing, trace and quarantine program,” said Sonia Gandhi, the chief of India’s main opposition Congress party.

* Afghanistan has reported 1,176 cases, including 40 deaths

* the Maldives has reported 34 cases and no deaths

* Nepal has reported 45 cases and no deaths

* Bhutan has reported six cases and no deaths

Disruptions in health services due to COVID-19 may have contributed to an additional 239,000 child and maternal deaths in South Asia: UN report

Health services must urgently be restored and strengthened to contain the pandemic’s impact on the most vulnerable families ... Read More...