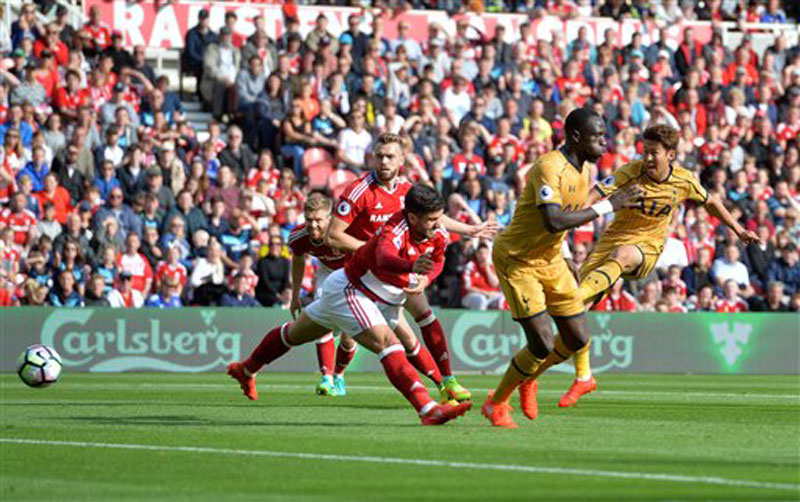 MIDDLESBROUGH, Sept 25: Son Heung-min stepped up in Harry Kane's injury absence with two goals to give Tottenham a 2-1 victory at Middlesbrough in the English Premier League on Saturday.

Kane, last season's top scorer in the league, injured his right ankle last weekend and faces a lengthy spell on the sidelines.

But Son, who wanted to leave Tottenham in the offseason, has scored his second double inside two weeks netting both inside 23 minutes at Middlesbrough.

It was a third consecutive loss for Middlesbrough, but a third Premier League win in a row for Tottenham.

Vincent Janssen's neat lay-off in the box sent Son dribbling his way across the box before placing a neat finish underneath goalkeeper Victor Valdes early on.

Son took advantage of hesitation in the Boro defense again for his second. Searching for a sight of goal, he dribbled down the left side of the box, beating two defenders before turning sharply and delivering a right-foot finish past the static Valdes.

Dele Alli should have got on the scoresheet before halftime when Christian Eriksen pulled the ball back inside the box and the Tottenham midfielder, normally so sure in front of goal, side-footed well over the bar.

The one-sided action continued in the second half, with Eriksen tricking his way through the back-pedaling Boro rearguard before the move finally broke down.

Boro substitute Adama Traore gave his side fresh attacking impetus after being introduced on the hour, and their renewed efforts were rewarded in the 65th minute when the hosts reduced the deficit.

Stewart Downing, who had been largely ineffectual throughout the afternoon, whipped in a free kick from the left and Gibson beat Victor Wanyama in the box to direct a strong header beyond the reach of Hugo Lloris.

Son came close to completing his hat trick on 75 minutes when he was fed by substitute Erik Lamela on the right side of the Boro box but saw his shot well blocked by defender Calum Chambers.

But Tottenham's lead looked increasingly vulnerable, and Jordan Rhodes was not far away two minutes later when he got his head to another deep Downing cross only for Lloris to save well down low.

Striker Harry Kane has confirmed he is in talks to sign an improved contract with Tottenham Hotspur and reiterated that... Read More...