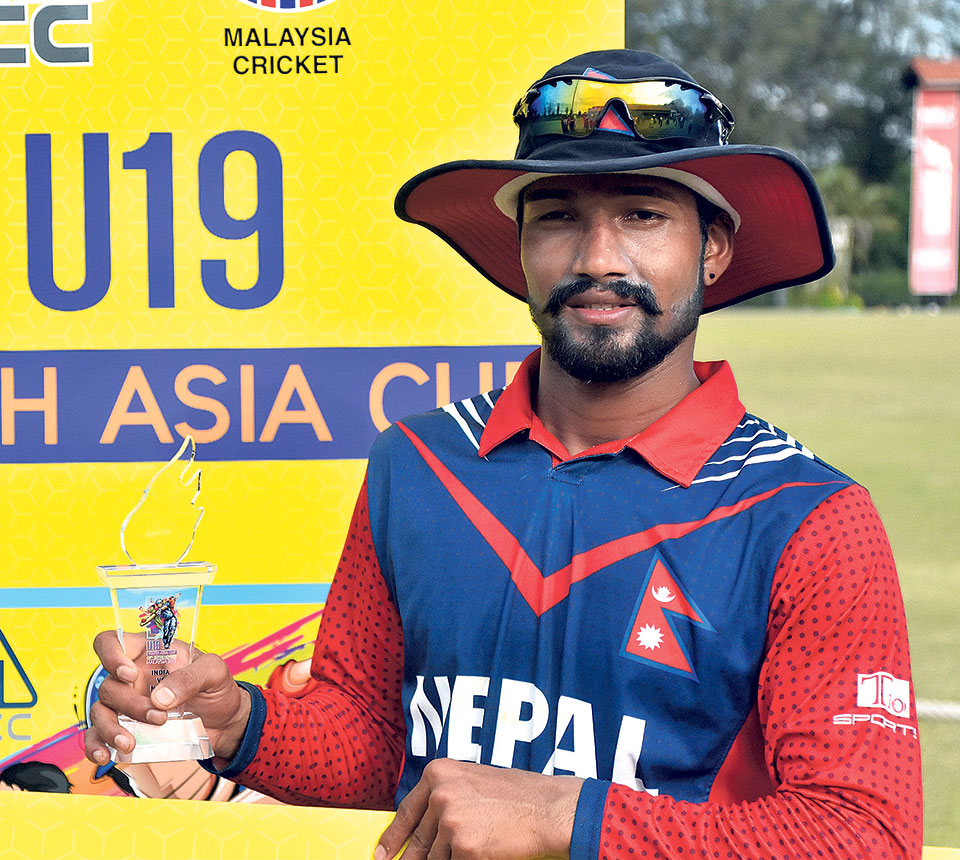 KATHMANDU, Nov 13: Nepal registered a historic 19-run win over India in the ongoing ACC U-19 Youth Asia Cup on Sunday.

After skipper Dipendra Singh Airee displayed an impressive all-round performance scoring 88 runs and claiming four wickets, Nepal produced first-ever win against India in its cricket history.
In the Group A match at Bayuemas Oval Cricket ground, India won the toss and invited Nepal for batting. Nepal scored 185-8 in the allotted 50 overs and managed to bowl out India for 166 runs in 48.1 overs.

Nepali head coach Binod Das praised his players after defeating Rahul Dravid’s side.
“This is an historic win and all credit goes to the team for the hard work and the belief they put in. The game was competitive from the word go and having played here before, we knew the conditions will change with time,” said head coach Das.

“Dipendra made one of the best all-round performances we have seen. He led with the bat and delivered with the ball.”

With the win over India, Nepal has now strengthened its chance of securing its berth in the semifinal. Three teams in group A including India, Nepal, and Bangladesh have two points each.
India and Nepal, which have played two matches each, occupy the first two places in the group on the basis of run-rate, while Bangladesh is in the third position with one game in hand. Tigers will take on Malaysia in their second match on Monday.

Nepal had made a poor start to the inning with opening duo Jitendra Singh and Mahamad Asif Sheikh building up just 12-run partnership for the first wicket. Sheikh was dismissed for 3 runs while the other opener Singh scored 95-ball 36 that included three boundaries.

Nepal came under pressure when it lost the third number batsman Anil Kumar Sah for just six runs. However, skipper Airee who came to bat at the fourth number smashed 101-ball 88 and led Nepal to a respectable score. Airee also created 49-run partnership with Singh for the third wicket.
He also formed a 28-run partnership with Rohit Kumar Paudel for the fourth wicket. Paudel was able to contribute just six runs in 14 deliveries.

India made strong start to the inning as openers Himanshu Rana and Manjot Karla created 65-run partnership for the first wicket. Indian skipper Rana made 38-ball 46 hitting one six and seven fours while Karla scored 35 runs in 46 deliveries.

Atharva Taide (13), Atharva Taide (27), and Anuj Rawat (18) were the other batsmen to make notable contribution for the Indian team.

Pawan Sarraff and Shahab Alam supported skipper Dipendra Singh Airee in bowling by claiming two wickets each, while Kamal Singh Airee and Lamichhane added one wicket each.
Nepal will now take on Malaysia in its last group-stage match on Tuesday while India and Bangladesh will compete in the group’s last match on the same day.

Who said what on Nepal's historic win over India?

Nepal has seized a historic win against India after winning by 19 runs in ACC U-19 Asia Cup at Malaysia... Read More...