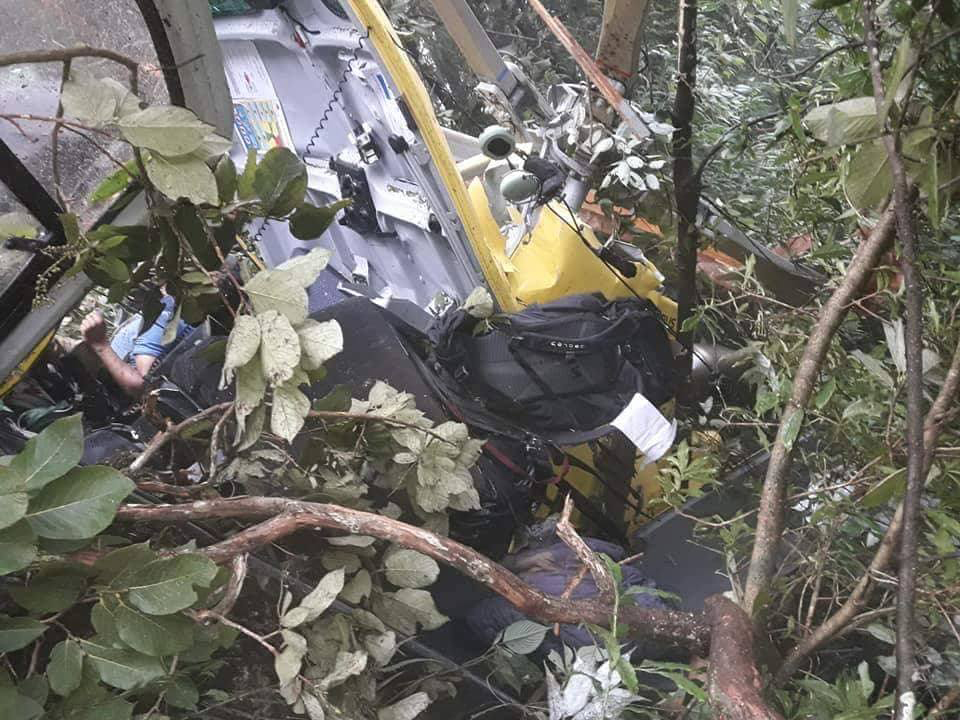 DHADING/ NUWAKOT, Sept 9: Six people died while one was injured after an Altitude Air helicopter crashed into the dense forest of Mailungpakha in Meghan Rural Municipality-1, Basurgchet of Nuwakot district on Saturday morning.

According to Nuwakot Police chief, Deputy Superintendent of Police (DSP) Bhim Lal Bhattarai, a total of seven people including Captain Nischal KC were on board the ill-fated helicopter. Aani Dolma Dikki of Chumanubri Rural Municipality-2 survived the crash with critical injuries.

Hours after the crash rescuers rescued her from the crash site and airlifted her to the capital for treatment. She is being treated at Nepal Medicity Hospital in Lalitpur. The passengers who were killed are Hiromi Konafi, 68, (a Japanese national), Dilli Bahadur Gurung, 40, (Ramechhap), Hira Sherpa, 37, (Dolakha), Chowang Nurbu (Gorkha), and Sunil Tamang, 22, (Sindhupalchowk).

The helicopter had taken off from Samagaun at 8:02 AM. According to Tribhuvan International Airport (TIA), the last contact the helicopter had with the airport was at 8:05 AM. The chopper had flown to remote part of the Gorkha district early in the morning of the same day taking some Chinese tourists.

According to Sukram Tamang, a local who took part in the search and rescue operation, three dead bodies were found in the helicopter while one was found 10 meters downhill the crash site and one was found 50 meters downhill. “After I heard that the accident had taken place, I walked for two hours to reach the crash site,” he said, “The captain was found dead in the pilot's seat while other dead bodies were scattered.”

Tamang added that the survivor Gami Dolma Dikki was found about 150 meters downhill a steep slope on the hill. “We had to walk for two hours to find her,” he said, “The dense fog made it difficult.”

Nuwakot police have said that the 9N-ALS AS350 B3e code numbered helicopter was headed for Kathmandu from Samagaun of Gorkha when it crashed in Mailungpakha.

According to DSP Bhattarai, Captain Nischal KC who was operating the flight is among those killed in the helicopter crash. DSP Bhattarai along with 10 police officials reached the accident site for rescue. TIA has informed that one helicopter from Altitude Air and two from Shree Airlines were also mobilized for the rescue operation. The helicopter was found by the police in a crashed state at 5,500 feet above sea level.

According to DSP Bhattarai, the accident site is an eight hours walk from the nearest police post and is covered in dense forest. The search operation was been hit by bad weather as a dense fog covered the accident site.

PM Oli is seeking a vote of confidence today in parliament. Will he survive?
12 hours ago

Nepali among those killed in Baltimore shooting
13 hours ago

Lawmakers close to Nepal-led faction of ruling UML put on hold their resignation; decide to abstain from voting in parliament today
13 hours ago

PM Oli fails to secure parliament’s confidence, what next now?
4 hours ago