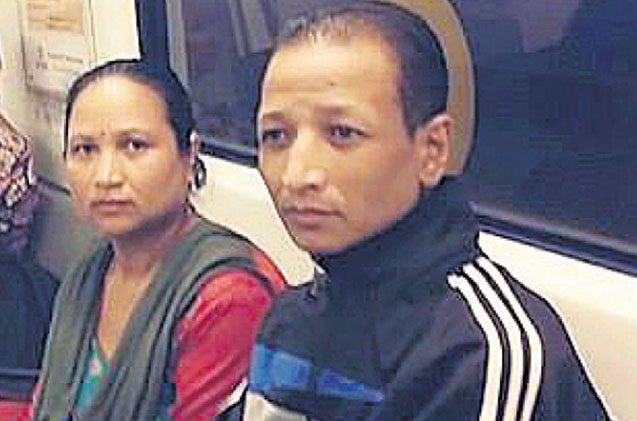 Sister Sanumaiya and her brother Balaram in a photo taken three months back while they were in India for a checkup.

KATHMANDU, Dec 13: When Sanumaiya Naga, 42,  was just a child, she would always happily share her food with her brother Balaram . This week, the same sister donated him her liver and saved his life. When Balaram opened his eyes after the hours-long surgery, the first thing they searched for was  none other than Sanumaiya. And the first word the patient uttered in the ICU was “Sister”.

Balaram Naga’s liver transplant is the first ever in Nepal. The 10-hour surgery conducted at Human Organ Transplant Center, Bhaktapur last Wednesday instantly stole the media limelight. A 19-member South Korea-Nepal team was behind its success. While the surgical team and the entire country were happy with the outcome, the most euphoric was Sanumaiya herself. “How is my brother?” was the first thing she asked after regaining consciousness at the ICU.

When Balaram was born, Sanumaiya was six. The brother-sister bond was strong right from the beginning, according to the family. “She always loved to feed him. When he cried, she would do anything to make him happy. He also was very much fond of her,” said their elder sister Krishnamaya.

Sanumaiya’s husband Shiva Prasad Lageju and Balaram’s wife Krishnaswari, who were in the hospital room, were both smiling. Even though his wife had made a huge sacrifice to save her brother, Shiva Prasad was not the least dismayed. “It was her choice and now she is very happy that she has saved his life. I feel relieved that both are doing well,” he said.

Krishneswari, who has been caring devotedly for her husband and her sister-in-law, informed that ‘the patients’ are relishing mild foods. “She is taking  eggs, tea, jaulo and daal and he is taking a little dal only,” she said.

Balaram was given to alcohol and damaged his liver. He developed ‘alcoholic liver cirrhosis’. Liver patients in Nepal would go to India and other countries for surgery, according to Dr Pukar Chandra Shrestha, director of the hospital.

Balaram’s family had also gone to Delhi following his liver complications. They were preparing for a follow-up visit when they learnt that liver transplants were now available in Nepal also. “After consultations with  family, we decided to try it here,” said Krishneswari.

The surgery in India would have cost over Rs 10 million. The hospital here has provided the surgery free.

American rapper Nicki Minaj's brother Jelani Maraj has been sentenced to 25 years to life for raping an 11-year-old. ... Read More...

Manaslu avalanche: One killed, several others injured
16 hours ago

When will the undeclared Chinese blockade end?
19 hours ago

1,051 people infected with dengue in a single day
15 hours ago

Electoral alliance a must to safeguard democratic values: Minister Shrestha
4 minutes ago