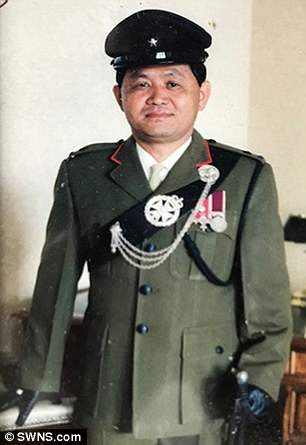 Major Gurung at Buckingham Palace when he was the Guard Commander for Her Majesty the Queen in 1998.

A decorated Gurkha soldier who went to war with Prince Harry is battling the Home Office to stop his 75-year-old sister being deported to Nepal.

Major Udaibahadar Gurung MBE served for around 50 years in the British Armed Forces and commanded HQ Company of 1st Bn Royal Gurkha Rifles, the unit Prince Harry deployed to Afghanistan with in 2008.

His sister, Lal, a widow, shared his home in Colchester during his years of service.

Lal, who is entirely dependent on her family and does not claim any public funds, is now facing being deported despite being in poor health and unwell.

The courts refused an appeal by her family to allow her to stay earlier this year.

And Major Gurung, who acted as Guard Commander for Her Majesty the Queen in 1998, has set up a petition on Change.org entitled 'Stop deportation of frail Nepalese lady'.

If nothing changes in the next few weeks, Lal will be deported to Nepal where her old house has been unused since the 2015 earthquake and she has no family.

Major Gurung, said: 'I am paying for medical insurance every month, I take her to private GPs and we don't use the NHS.

'She is suffering from some major ailments, I'm not asking for help from the Government, I am asking for a visa so she can live well in this country as she has no-one in Nepal.'

The family appealed the decision, and after speaking to their solicitors a second hearing was held at an upper tribunal in April this year.

They were told they could make a fresh application for a visa, but Lal's circumstances must have changed for it to be approved.

The Home Office believes Lal, who lost her husband in action in the Pakistan War in the 1970s, could have sufficient support back in Nepal, but her family disagrees.

Major Gurung continued: 'Lal was due to visit in May 2015 but the earthquake hit in April.

'She came to the UK and when her six months here was up she asked if she could stay as her home had been damaged.

'We applied for her to stay in September 2015 but this application was rejected by the Home Office.'

Lal's home in Nepal has structural damage and is rat and cockroach infested.. She also has no family members there and will be alone.

She said: 'Over the past few years I have been with my brother's family, I feel I am looked after extremely well.

'At the age of 75 I don't think I can be looked after so well by anyone in Nepal.

'Here I get loving home and care including excellent food. I like the UK so much.

'I live with my brother, his wife, son, daughter-in-law and their three-year-old son.

'I love to be with my nephew's son, he adores me. It will be very difficult for me to leave my whole family and return to Nepal.'

Major Gurung, Chair of the Colchester Nepalese Society, joined the Brigade of Gurkhas in 1969.

After recruit training in Malaysia he served in, South Korea, Hong Kong, Brunei, New Zealand, the Falkland Islands, Germany, and the UK.

A Home Office spokesperson said: 'All cases are carefully considered on their individual merits, including any compassionate circumstances, and in line with the UK immigration rules.'