Signing up for organ donation a ‘beautiful experience’ 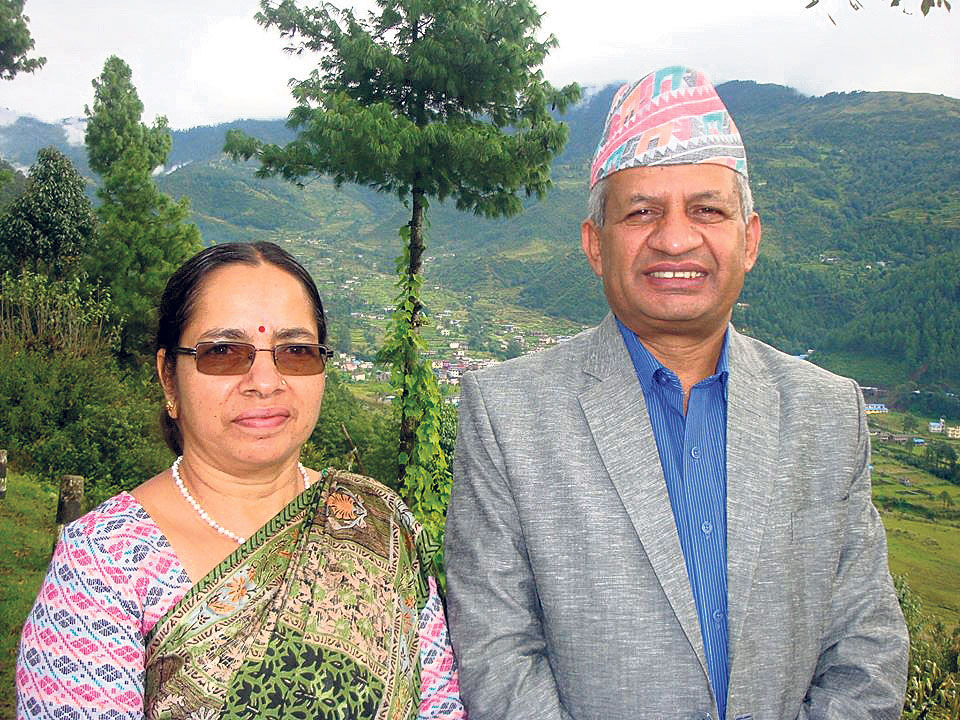 Foreign Minister Pradeep Gyawali and his wife Saraswati say their decision to donate their organs after death has been one of their most beautiful experiences in life.

An octogenarian lady arrived at the Gyawali residence early morning Sunday with khada and flowers. Subarna Darshan is an old family friend and she was there to congratulate the couple on their noble decision. The visitor said to the couple that they had earned all the religious virtue there was to earn while still in this life and all their sins would now be cleansed.

The Gyawalis were touched by the gesture. They said the organ donation decision was for them one of the most beautiful experiences in life and urge everyone else to think about doing likewise. It was a high profile move and has generated some introspection across the country. Republica’s Anjali Subedi caught up with the Gyawali couple to discuss their decision.

What led you two to take this step?
Saraswati Gyawali : I read news reports about the scarcity of dead bodies at the Teaching Hospital at Maharajgunj for medical students. Later, I also came to learn that organs donated from one dead person can save many lives. That got me thinking.
Pradeep Gyawali : As a politician, you come across people in various circumstances. I have run into kidney patients suffering in front of my own eyes. In my hometown in Gulmi, there were many such people. I met many more in Chitwan. Such exposure to suffering has motivated me to donate my organs and I have also worked to bring about conducive legislation.

Donating one’s organs is a noble thing, so why do many people hesitate to do so?
SG: Lack of awareness is one of the main reasons. People do not know that one can save lives even after one’s death. And there are also superstitions about the body after a person dies.
PG: I do not believe in life after death, but many people do. And when you believe in such things, you are likely to feel differently about how your body is used after death. How others treat the body, who will touch it and so on can be deeply bothering.

To register for organ donation after death, you have to first contemplate death. You have to accept, and not just abstractly, that you will die one day. People generally avoid the topic. Could this be a reason why few people pledge their organs?
SG: Definitely! But when you realize that death is the ultimate reality, you may want to be useful to others even after you die. We all turn to ashes in the end, and when this sinks in organ donation does not seem like a bad idea. Intimations of mortality can even stop people from becoming corrupt.
PG: I was a science student and my thinking on this subject is rather different. But generally, like you just said, people do not like to dwell on the subject of death. But when they ponder that they can help others live on even after they themselves perish, they become more amenable to organ donation.

You are both so clear and positive about organ donation. What took you so long to make the decision?
SG: (Laughs) Yes, I was rather late. I wanted to be among the first 10 organ donors in the country. But there was no urge for publicity, and no hurry. I just wanted to be registered. My donation card shows I am going to be the 1,701th donor (as of July 19, 2019). We could not make it earlier for several other reasons also. I was heavily taken up with my autistic daughter.
PG: You know, thinking about organ donation is one thing but actually registering for it is different. We both knew we were going to someday and we could have done it much earlier. Life is so uncertain.

In your experience, what prevents people from coming forward to donate?
SG: If family members are not positive it creates a problem. When we were making our decision, we asked our son about it. And he said he was okay. So, if we die normal deaths, our organs will definitely go to those who need them.
PG: You have the right to pledge your organs for donation but there may be practical problems if the family does not cooperate. The dead body may not reach the hospital soon enough, and if that happens the organs cannot be used for transplant.

How many lives can one deceased person save with successful transplant of the organs?
PG: Two kidneys for two people, two lungs for two more people, pancreas, heart, liver and small intestine for others. One deceased can donate eight organs.

KATHMANDU, June 27: The Indian side is not positive about sitting for talks to resolve the ongoing border dispute between... Read More...