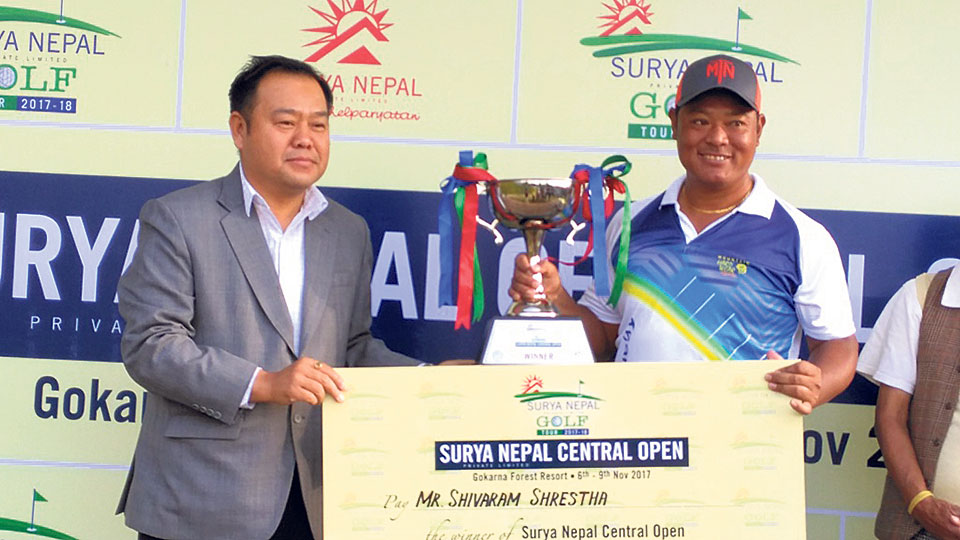 Marketing manager of Surya Nepal, Bal Kishan Gurung hands over the trophy and check to golfer Shiva Ram Shrestha (right) during the Surya Nepal Central Open in Kathmandu on Thursday.

Shrestha carded one-under 71 to post the total score of 22-under 266 and registered a 20-shot victory over Surya Prasad Sharma and Sanjay Lama. Surya carded four-over 76 and Sanjay turned in a card of even-par 72 for a total of two-under 286.

After winning his 38th title of his career, Shrestha pocketed Rs 115,000 while the second position golfers bagged Rs 63,500 each.

Rame Magar came fourth at two-over 290 after he carded one-under 71, while Deepak Magar was fifth at 294 after he played three-over 75.

Phuntshok N Lama won the amateur section trophy with a score of 25-over 313 while Subash Ghising came second on the count back after being tied with Sunil KC at 317.

A total of 42 players, 32 pros, and 10 amateur golfers, took part in the tournament that had a total of Rs 630,000 cash prize sponsored by Surya Nepal Private Limited.

Bal Kishan Gurung, marketing manager of Surya Nepal, and Ghana Shyam Thapa, advisor of Nepal PGA, handed over the prizes to the winners.