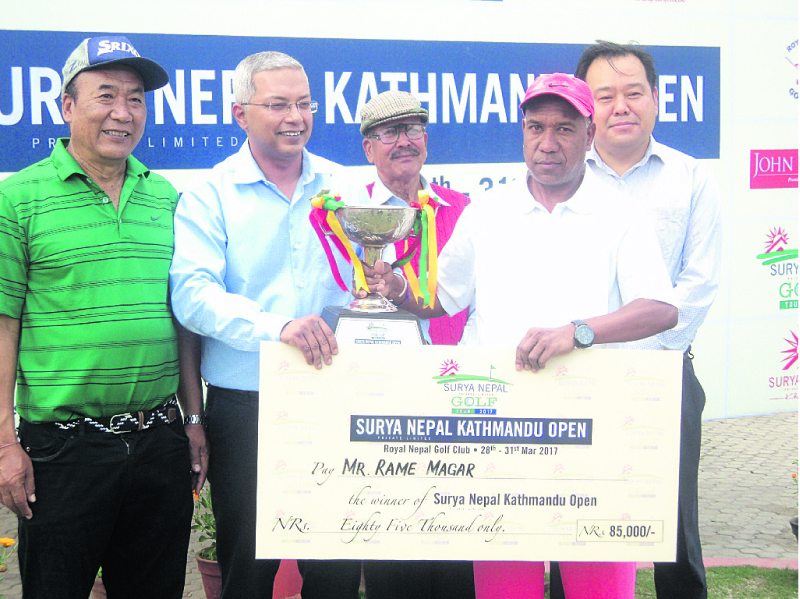 KATHMANDU, March 31: Rame Magar maintained his six-stroke lead in the final round of Surya Nepal Kathmandu Open golf tournament at the par-68 Royal Nepal Golf Club in Kathmandu on Friday to win the title.

Rame, who opened the tournament with four-stroke lead, carded even-par 68 for a total of five-under 267. Rame played seven-under 61, three-over 71 and one-under 67 in the first three rounds to win the fourth major title of his career. As the champion, he received a check of Rs 85,000 along with the winner’s trophy.

Rame held a six-stroke lead over Nepal number one pro Shivaram Shrestha and Bhuwan Nagarkoti going into the final round and was never threatened. Rame had extended his lead to nine strokes after the 11th hole, and cruised to victory even after committing mistakes on the 14th and 15th holes.
Shivaram, who has claimed all four previous titles under the Surya Nepal Tour 2016-17, failed to replicate his previous success. He carded even-par 68 on the final round for a total of one-over 273 to finish two strokes ahead of Bhuwan. He received a check of Rs 58,000.
Bhuwan played two-over 70 on the final round to secure third place finish at three-over 275 and win a purse of Rs 45,000.

Rame played two-under 32 on the front nine with birdies on the third and fourth holes. On the back nine, he played two-over 36 after he birdied on the 10th hole but double bogeyed on par-three 14th hole and bogeyed on the following hole.

Shivaram carded one-under 33 on the front nine and one-over 35 on the back nine. He carded birdies on the first, fourth and ninth holes against bogeys on the fifth and seventh holes. After taking the turn, he dropped twin shots on par-four 11th hole and made birdie on the 12th hole.

Bhuwan scored two-over 36 on the front nine and even-par 34 on the back nine. He made birdie on the fourth hole but dropped a shot each on the third, sixth and seventh holes. After taking the turn, he made birdies on the 11th and 13th holes against bogeys on the 10th and 18th holes.
Tanka tops amateur

Tanka Bahadur Karki finished on top among amateur golfers. He carded even-par 68 in the final round for a total of 17-over 289. Sukra Bahadur Rai scored three-over 71 for a total of 18-over 290. Over-night leader of the category Phuntsok N Lama played a disastrous round of 10-over 78 for a total score of 20-over 292.

The fifth event under Surya Nepal Golf Tour 2016-17 season featured 40 players in total including 29 pros and 11 amateurs. The event carried a total purse of Rs 500,000 and top 21 pros had their share in cash prize.

KATHMANDU, May 26: Bhuwan Nagarkoti beat Nepal number one Shivaram Shrestha on the second extra hole in the playoff to... Read More...