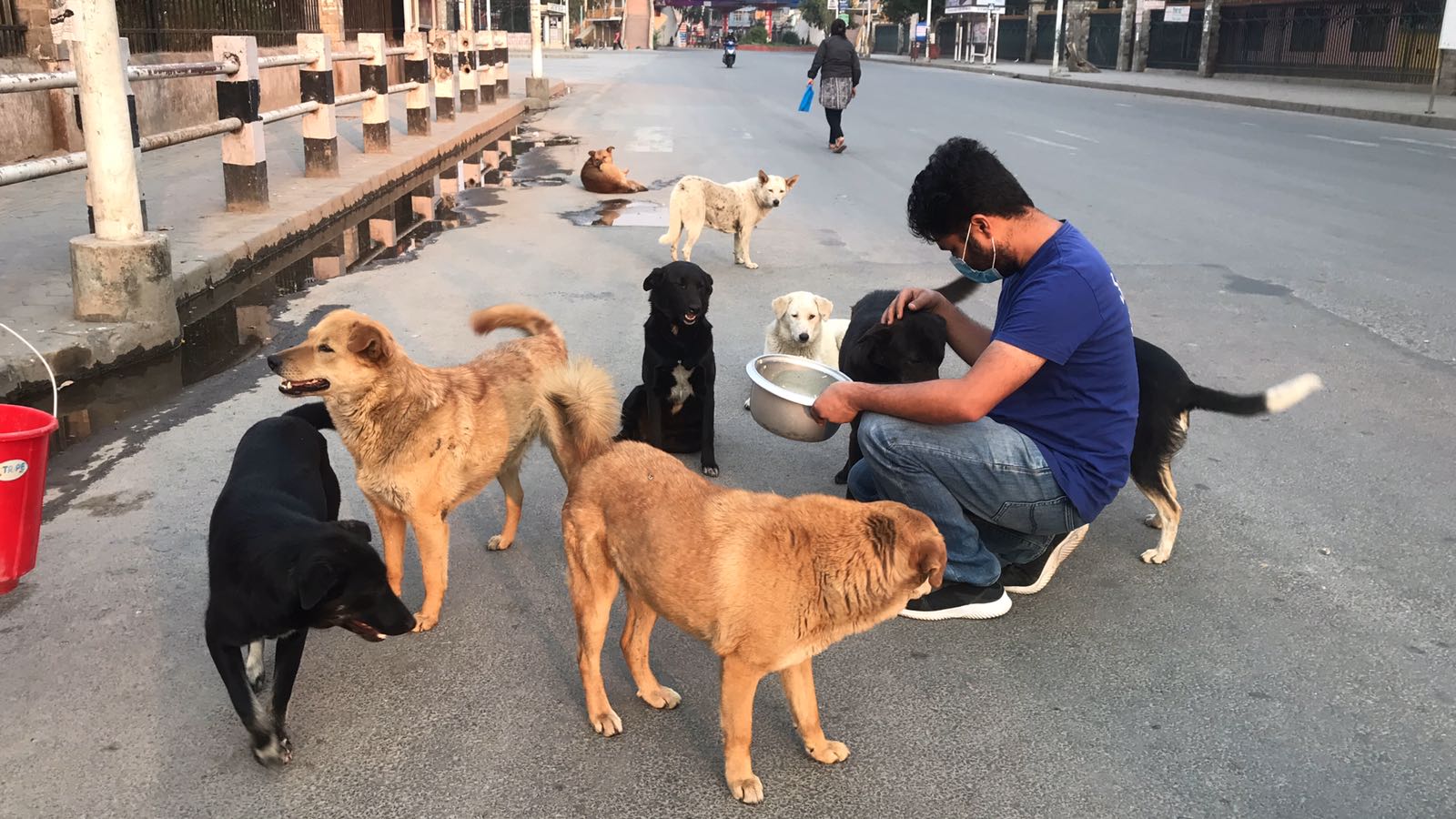 The author is an MSc in Environmental Science from CAS College, TU.
news@myrepublica.com

While human health is vital, it is also critical to consider animal welfare and apply dog population management techniques that do not cause these species unnecessary discomfort.

On a quiet evening in Thimi, I heard a screaming voice of a lady from the rooftop of the house yelling at her 13-year-old son. I got interested and, against the “moral” conduct of a good neighbor, tried listening to the conversation. Amidst a few horns of motorbikes and rumbling of tipper trucks, I could make out her shouting at her son because he had brought home a puppy. A few moments later, I saw the boy come out of his house and following him was the curious pup. I was thoughtless for a momentas I could not choose a side. The boy had done nothing wrong by bringing an innocent little pup home. The pup was probably a month old; its mother had given birth to seven pups a month ago. This morning I could only see three of them jostling to get to their mother’s milk. The pup had a white body with a black patch on its eyes — anyone could be excused for falling for the pup’s cuteness. But could I adopt the dog family and raise them in my house? I did not have an answer.

The next day as I came back from my college, I looked to see the dog family but couldn’t find them. I wondered where they were. Later in the evening, I saw the boy playing outside his home. Curious about the pup, I went to him and asked where the dogs were. He told me that his mother had carried the pups to the next neighborhood and their mother followed them after eating rice and meat offered by his mother. I could make out that he had an innocent sadness in his eyes when he told me that his mother no longer wanted him to be around the “street dogs”. “Did the boy commit a crime? Do street animals not have a right to live in this society? Is it wrong to strengthen social relationships with street animals?”I wondered.

The dog family was very playful, the mother greeted me with a wagging tail every time I came back from college. She had been around for a few years in the neighborhood. I had given her food plenty of times. I had a liking for her and her cute pups. The tragedy of not being able to see them the next day kept me awake for large parts of that night. After all, I too am a child at heart. The whole neighborhood had worshiped her just a few months back in Kukur Tihar. Decorated by a yellow garland, the white pregnant dog with its big black eyes put its tongue out and wagged its tail in the excitement of getting all the attention. How amazing would it be if the respect offered in that Kukur Tihar was celebrated each day!

My mind then wondered about these feeble animals that lived in our neighborhoods, barked at strangers, looked at us with love, wagged their tails when we came back to our homes and expected love and some food in return from us. How often can we say, they would get either. Ignored, hated and sometimes violated, I felt the street dogs had a terrible fate to be where they were. Just compare them to the pet dogs that live in the same neighborhood; what stark differences!

I am sure it is not possible to pet every street dog, but what can we do? Maybe we could start by thinking that in whatever form, these were also beautiful manifestations of nature and universal energies. These were also the creations of the same artist that made humans. They are also a part of this big large home we call earth and that reason alone is enough for us to show respect and do what’s in our hands to help them live a better life. I remembered a quote given by Brownie McGhee that could make sense in this scenario— “Something is better than nothing”. I wondered if there could be a utopia where people collected the rice used in tikas, and cooked and fed them to the dog not only on the auspicious day of KukurTihar but throughout the year. It might sound impractical but well, what if?

I walked out of my bed and drank some water. I opened up some websites on my phone to see what practical approaches were out there to help these dogs. How could we possibly take care of the situation? Is it possible to have a scenario where there are no street dogs the means to achieve which do not include cruelty of any form? I was curious and ready to dive deep into the internet.

Through the heaps of information, I found that Nepal has thousands of abandoned dogs with an estimated 10,000-30,000 in Kathmandu alone. The Indian Pariah Dog (most common), the Mountain Dog, Tibetan Mastiffs, Himalayan Mastiff (BhoteKukur) and other mixed breeds are the breeds of street dogs found in Nepal. These ownerless, homeless dogs spend most of their lives on the streets and receive little to no medical attention. Nepal’s street dogs are found to be intelligent, clever, resilient, street-savvy, and, given a chance, loving and loyal companions. These ungoverned, displaced, and disregarded animals thriving on the street are exposed to several human-induced threats that reflect the substandard attitude and behavior of this 21stcentury society toward these vulnerable beings. However, humanity is still alive and in many cases,the food for these homeless dogs comes from human donations. The prevalence of diseases and injuries among these street dogs is significant, and their lives are much shorter than those of pet dogs. Fueled more so by the food they have from garbage laying around in the streets of Kathmandu.

Many dogs suffer malnutrition, are hit by cars, develop mange or other ailments, and are left untreated, leading to sad lives and deaths alone and unloved. The negligence of humans in regard to this even cost animals their lives. Some of them are beaten badly for trying to get closer to humans or visiting their houses in search of affection; some are harmed just for the peace of some evil human minds for no valid reason. Hundreds of street dogs are left killed on roads every year, hitby a vehicle or by jagged riders; some of them are racked with the pain of wounds given by humans; some are brutally murdered in society; some die just because of deprivation of food; some become prey to humans having fun with a catapult and stone. Governing bodies show no empathy even when many are poisoned by municipalities and local bodies  in the name of reducing dog population in their neighborhood.

Every year, almost 200 people suffer rabies as a result of dog bites and this becomes a reason big enough for people to believe that street dogs are a problem. Some go to the extent of believing that these misplaced canines should be killed to reduce the street dog population, while others resort to hurling stones at dogs. While risks of rabies from street dogs are a factor to consider, there must be more humane ways to deal with them.

I looked up to see organizations that are working in this sector and the kind of work being done. I found very few organizations speaking up for the interest of stray dogs while there are hundreds of donors and organizations fighting for other causes. A non-profit organization Kathmandu Animal Treatment Center (KAT) was established to help and protect Nepal's street animals, particularly dogs. Its main purpose is to reduce the number of street dogs while also ensuring that those that remain on the streets are safe and healthy. One of the members of the organization was found saying that there are over 20,000 dogs that live in the streets of Kathmandu. They said that many suffer from malnutrition, infected skin patches, parasites and other illnesses and injuries. The organization and others similar to them attempt to aid these canines by facilitating services such as rabies vaccinations, animal birth control, public education, and rescuing and treating sick hounds. Apart from them,other organizations that are working for animal welfare and have rescued thousands of street animals include Animal Nepal, Sneha’s Care, HART, Paaila, Aatmoutsarga Nepal, and so on.

An underlying understanding found among all animal activists is that while human health is vital, it is also critical to consider animal welfare and apply dog population management techniques that do not cause these species unnecessary discomfort. Some also believe that because these stray dogs rely on scavenging garbage to survive, more garbage would imply healthier dogs and puppies. In an ironic twist, this makes dogs a public health benefit. They eliminate perishable waste that could otherwise be a source of contamination for people.I do not know the extent to which they contribute to the waste management problem, but I do believe that we must conserve these breeds to ensure that their kind does not become extinct from our ecosystem and continue being identified as the local dog breed of Nepal. But how do we do it?

Initial conservation steps toward their survival in a community would be: establishing an animal management welfare community in the municipalities. This committee will work to link community members with their respective wards and make proper plans to feed and vaccinate the street dogs. This committee should also provide awareness to the people in the communities, while also identifying rogue dogs and transferring them to animal shelters. The government should encourage people to pet the local breeds of dogs and discourage foreign breeds. A good animal shelter with proper facilities like veterinary care should be put in place. Population control of street dogs should be prioritized through vaccinations. These approaches can be specifically laid out in the points below:

a.       Capture, Neuter, Vaccinate, and Release- Vaccinating stray dogs against diseases like rabies

b.      In several countries, sheltering free-roaming dogs is the most experimental and theoretical study of dog population control.

c.       Imposing taxes on foreign breeds. This was first done in the Netherlands and was hugely successful in encouraging people to adopt local dog breeds. Dogs in homes meanno dogs on the streets.

While street dogs do not have the luxury of a comfortable life that house pets enjoy, they are nonetheless adaptive to humans and respond to human empathy. A little empathy and respect for animals may undoubtedly decrease a lot of strife and make our nation a nicer place. My key point is that if conservationists recognize that conservation approaches that have worked in the past may no longer work or might be more inhumane, we may be able to adopt newer and more humane practices and still succeed. So let us work together to make our societies more mindful and considerate of our actions and their effects on the lives of all forms, including the dogs that live in the streets.

“The greatness of a nation can be judged by the way its animals are treated.”- Mahatma Gandhi

A street dog needs our care and love!

Raise The Voice for Humanity

Hundreds of infants all loving we miss Pray to all from the land of peace It's a warlike, keep fraternity Raise... Read More...

The battle between humanity and inhumanity

Somewhere or the other we as a human have been harassed, bullied, assaulted within our lives that had certainly left... Read More...

Newly-appointed ministers to be sworn in today
36 minutes ago

One arrested with marijuana
17 hours ago