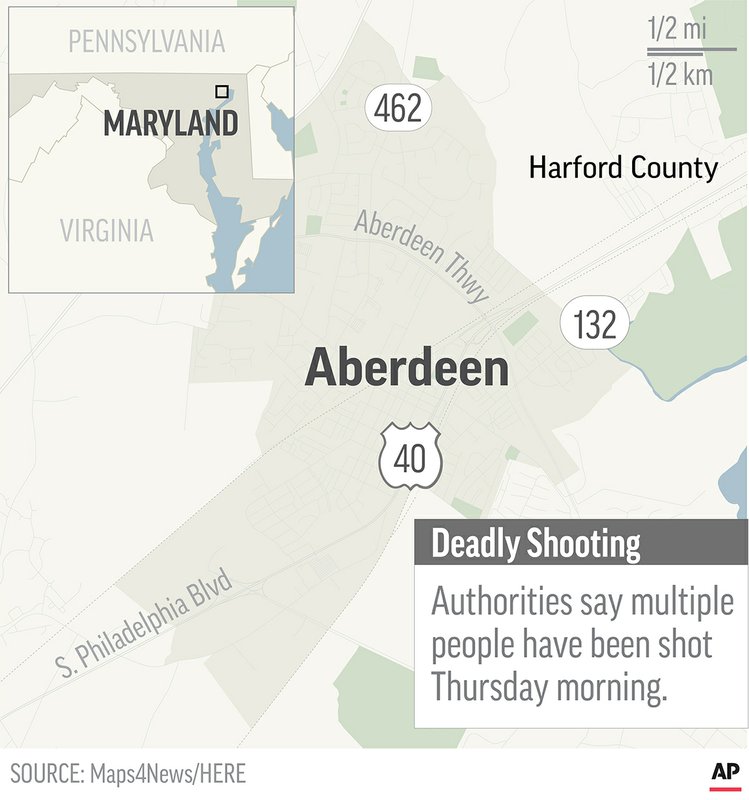 ABERDEEN, Sept 22: Law enforcement officials said Friday they might never know the motive for a female shooter’s violent rampage that killed three people and wounded three at a sprawling Maryland warehouse before she turned the gun on herself. It’s little consolation for grieving relatives and others trying to find answers.

The suspect, 26-year-old Snochia Moseley of Baltimore County, had been diagnosed with some kind of mental illness in 2016 but had legally purchased the handgun she carried in the deadly Thursday morning attack, Harford County Sheriff Jeffrey Gahler told reporters a day after the violence. But he said what ultimately triggered the workplace shooting is still a mystery and may remain so.

“Frankly, when someone does something like this, such violence against other human beings, we’re never going to make sense of it or understand it fully,” the sheriff said at a Friday press conference.

Law enforcement officials said the particulars of Moseley’s mental illness history would not have flagged her from purchasing a gun in Maryland, where buyers cannot pass a background check if they were either involuntarily committed for any period of time or voluntarily admitted to a psychiatric facility for at least 30 consecutive days.

A family friend of one of the victims killed in the shooting at the drugstore distribution center in Aberdeen, Maryland, said the immigrant family from Nepal was utterly wracked with despair and confounded as to how a person with a history of mental illness had a gun in the first place.

“They cannot understand how this could happen. In Nepal, there are very few homicides. They are asking: ’How did this person access a gun?” said Harry Bhandari, a community leader and candidate for state delegate who has known 41-year-old Brindra Giri’s family for about 10 years.

Giri, a mother of two, had only recently moved to the U.S. from her homeland of Nepal to join her husband, an employee of a local liquor store. Authorities on Friday identified her as one of the three people killed when Moseley, a temp employee, opened fired at the Rite Aid facility.

The county sheriff told reporters that Moseley had become increasingly agitated in recent weeks, and relatives had been concerned for her well-being. She used a 9 mm Glock that she legally purchased in March to fire a total of 13 rounds Thursday morning and died after shooting herself in the head.

Moseley had been hired for the holiday season and had been working there for less than two weeks, according to Gahler. She entered the building at 6:30 a.m. As people lined up to come in the building, Gahler said she cut in line and words were exchanged, but it was a “little incident.” She left around 7:21 a.m. Moseley, who had worked security jobs in the past, drove to her White Marsh home and got a handgun, pepper spray and handcuffs. She arrived back at the parking lot around 8:35 a.m. and entered the front door around 8:52 a.m.

She pulled a hooded shirt over her head and began shooting, striking and killing Aguda outside the building, according to Gahler. Inside, where there were about 65 people, she fatally shot Giri and Reyes and also shot Mitchell, Villegas and Purna, who survived.

She shot herself twice before police arrived, he said — once with a grazing wound and then with the fatal shot. She was already down when officers arrived and an officer moved her from the scene, not knowing that she was the shooter.

When asked how Moseley could legally buy a gun after being diagnosed with a mental illness, officials said it had not been determined that she had a “propensity for violence to self or others.”

The shooting sent survivors screaming and running in all directions. Bhandari said Giri was trampled in the chaos before getting shot. When the shooter shot herself, others helped the wounded before authorities arrived.

The attack came nearly three months after a man with a shotgun attacked a newspaper office in Annapolis, Maryland, killing five staff members. Authorities accused Jarrod W. Ramos of attacking The Capital Gazette because of a longstanding grudge against the paper. It came less than a year after a fatal workplace shooting less than 10 miles (16 kilometers) from the warehouse, in which five were shot, three fatally.

The Maryland attack also came on the heels of workplace shootings this week in Wisconsin and Pennsylvania.

Harford County Executive Barry Glassman said that, unfortunately, shootings like this are “becoming a too-often occurrence” in the nation.

Maryland shooting: Five killed in attack on US newspaper

Nepalis in Maryland, USA can take exam in Nepali for license

Women's rights only on paper, law-enforcement limited to cities
1 minute ago

Seven arrested for trying to rob tourist
23 minutes ago