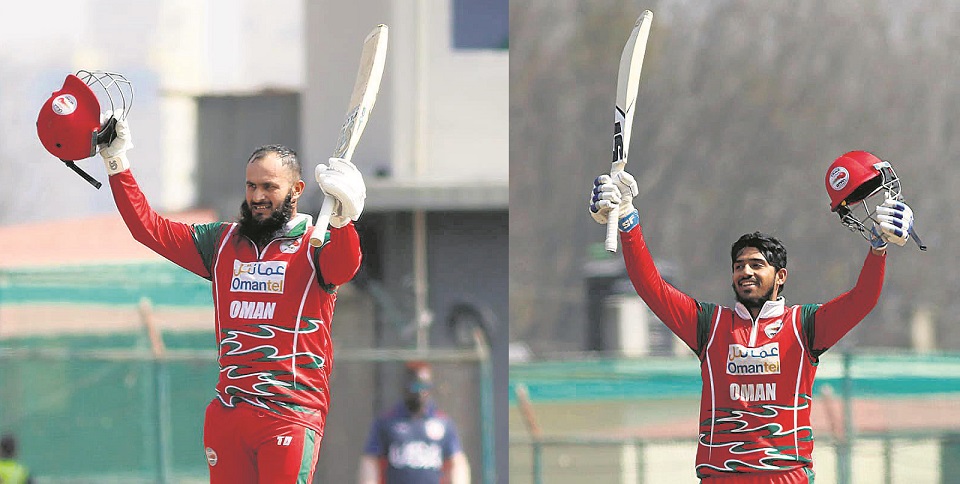 In this combo photo, Oman's Aqib Ilyas (right) and captain Zeeshan Maqsood celebrate after reaching their respective centuries during the ICC Cricket World Cup League 2 one-day international match against the United States at the TU Cricket Ground in Kirtipur on Tuesday.

Player-of-the-match Ilyas and Maqsood both brought up their respective centuries including 216 runs partnership for the third wickets to help Oman to reach 276 runs for the loss of six wickets in 50 overs. Oman dismissed the US for 184 runs in 39.1 overs to secure the win. Oman has consolidated its position on top of the points table collecting 16 points after the completion of 10th match in the League 2. It is Oman’s eighth win in the tournament.

Left-arm pace bowler Bilal Khan scalped three wickets including two in the first spell with the new ball. He sent Monank Patel and Steven Taylor for a duck each to reduce Oman three runs in the board for the loss of two wickets. Mohammad Nadeem continued his good form with the ball dismissing Xavier Marshall for 23 runs off 29 deliveries to further peg back the unsuccessful chase.

The US batsmen Aaron Jones and Nisarg Patel collected few runs in the middle with a partnership of 60 runs for the sixth wicket. Patel brought up his half-century with four boundaries and sixes each. He scored 52 runs off 36 deliveries before being removed by Ilyas. Likewise, Jones held an end together with a patient 79-ball 47 runs which included three boundaries before running out of the partners.

The hero with the bat, Ilyas and Maqsood shared five wickets between them to wrap up the US innings. Ilyas scalped three more wickets to his tally whereas captain Maqsood registered two wickets.

Earlier, the duo of Ilyas and Maqsood made most of the runs to help Oman reach a formidable total after the US won the toss and invited Oman to bat first.

Ilyas smashed 11 boundaries and a six during his 123-ball 105 runs in the match, scoring a century in consecutive ODI matches. He had scored his first ODI century, unbeaten 109 runs, against Nepal on Sunday.

Similarly, Maqsood brought up his first ODI century of his career smashing a run-a-ball 109 runs which included 10 boundaries and four sixes. Khawar Ali and Sandeep Goud scored 10 and 13 runs respectively in the either side of the big 216 runs partnership between the two batsmen.

The US, which was on top of the League 2 table before the tournament has dropped to the second position being stuck at 12 points after 11 matches. The second-placed team has lost all three matches, two against Oman and a match against Nepal on Saturday, in the current series so far.

The US will look to end the series on a high note with one final shot at victory with a match against Nepal on Wednesday. Nepal had defeated the side by 35 runs on Saturday.

KATHMANDU, Feb 12: The tri-series between Nepal, Oman and the USA, which was scheduled to be held in Oman in... Read More...

KATHMANDU, Feb 6: The government has given impetus to the process of signing memorandum of understanding (MoU) on employment for... Read More...