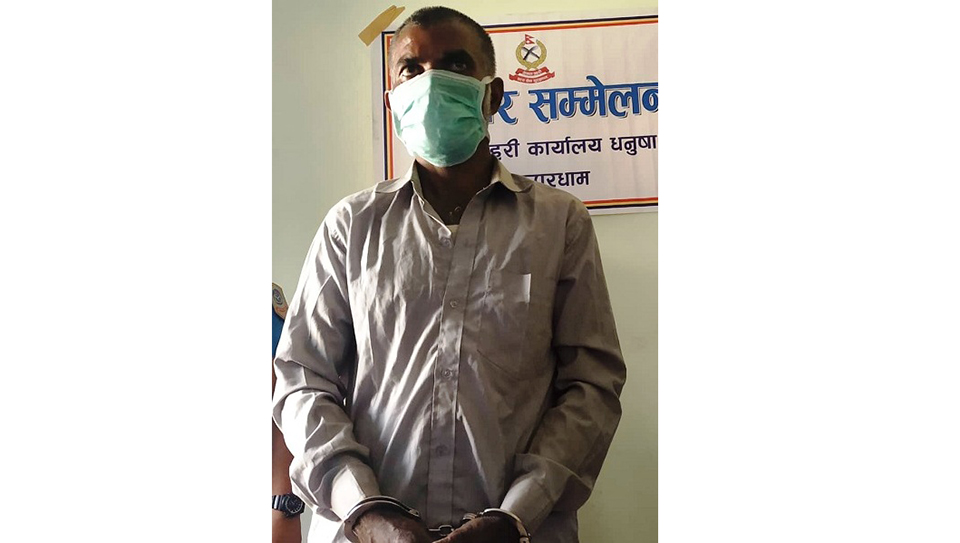 JANAKPUR, May 31: A one and half year-old toddler was killed in Mithila Municipality of Dhanusha district three weeks ago to appease a female deity. Police investigating the case have concluded that a shaman had offered the child in human sacrifice.

Police made public Shatrudhan Mahato, 55, at a press conference on Thursday, accusing him of killing the child. He was arrested on Wednesday.

Mahato's house is about 100 meters from the house where the family of Shamir, the toddler, lives. The family members often went to Mahato's house to seek cures for their illnesses. In fact, they were good friends. The child often called Mahato 'baba' (father).

The killing took place on May 6, at around 5:30 pm. Samir's mother Renudevi Sah of Mithila-6 had gone out to collect firewood, leaving the child playing in the garden in front of their home. Her husband Shambhu Kumar was away engaged in some work . There is a well near the house and many people were coming and going to fetch water. Mahato reportedly called the child over and carried him away.

Just two days before the incident, Mahato's wife and daughter had gone to Kathmandu for medical treatment. Taking advantage of their absence, he brought the child home, put him to sleep and killed him at around 2 am after conducting some worship rituals , said Police Inspector Shekhar Khanal. "He has already admitted to sacrificing the child to the deity Chamainidevi Than," said Khanal during the press conference.

At first, police had interrogated individuals and families that had had disputes with the victim's family . "It was after taking more than 65 persons into custody for investigations that we finally reached our conclusion," Khanal added.

The Sah family went to the police after not finding the child at home or in the neighborhood even till late in the day. No one suspected Mahato, or thought that he harbored dark wishes to become a powerful shaman.

After the gruesome rituals, Mahato wrapped the child's body in handkerchiefs and threw it into fields near the victim's house. After returning home, he washed his clothes and the weapon he used to cut the child's throat. He did not come out of his house even once while everyone else in the locality was helping to search for the missing child.

JUMLA, May 3: Durga Bahadur Khatri is a renowned shaman in Chandannath Municipality of Jumla. ... Read More...

The Ill-planned Roadside Plantation in Kathmandu
17 hours ago

Overcrowded district jail at risk of infectious diseases
7 hours ago