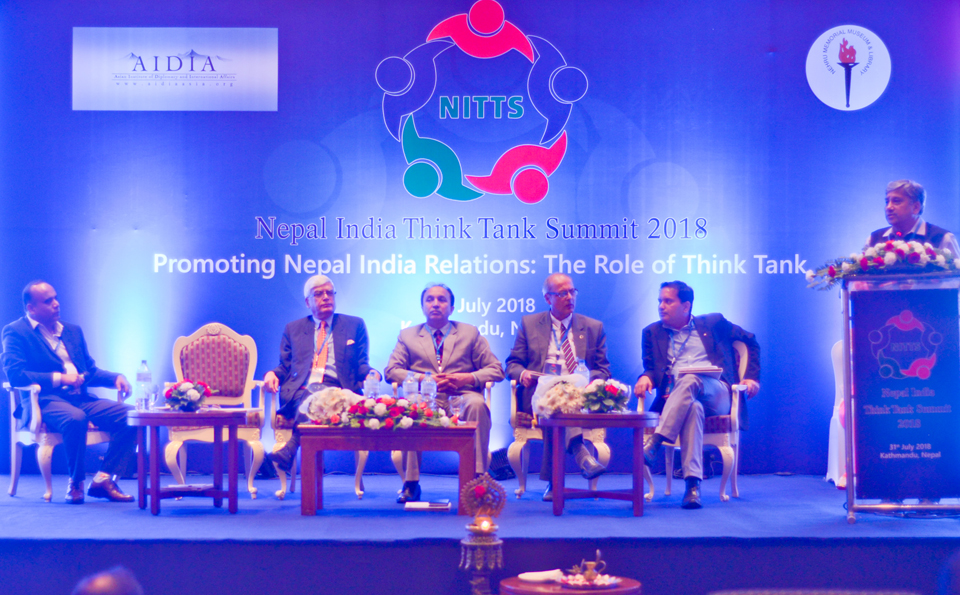 KATHMANDU, Aug 1:  A senior leader of the ruling Bharatiya Janata Party (BJP) in India has suggested to Nepal to pursue a “Look South” policy in its foreign policy orientation keeping in view the "immense benefit" Nepal can reap from India, India Ocean and beyond.

Addressing a one-day Nepal-India Think Tank Summit organized jointly by the Asian Institute of Diplomacy and International Affairs and Nehru Memorial Museum Library (NMML) held in Kathmandu on Tuesday, BJP General Secretary Ram Madhav asked Nepali leadership to appreciate their neighbor's security and strategic concerns as they pursue their own path of development.

Madhav, who is also director of India Foundation, said Nepal will be in a better position if it adopted a "Look South" policy. He argued that this policy encompasses not just India, but also the Indian Ocean and South East Asian countries. “Oceans play a very important role in the development of a country. The Indian Ocean has also remained as the life line for many countries,” he said, adding that the Indian Ocean is adjoined with India.

Also seen as an informal foreign policy advisor to Indian Prime Minister Narendra Modi, General Secretary Madhav maintained that Nepal can access the Indian Ocean through the Calcutta port or Chittagong port of Bangladesh. He also expressed his confidence that Nepali political leadership will pursue and act in line with the "Look South" policy, keeping in view the immense benefit Nepal can reap from it.

The remarks of Madhav come at a time when both India and China are putting their efforts to increase their sphere of influence in the India Ocean. Indian is lately seen adopting a policy to nudge its immediate neighbors against greater engagements with its regional rival China and bring in its fold through extra generous gestures towards them.

Without referring to any specific country, Madhav said that Nepal has to take into account security and strategic concerns of India while pursuing any development path. “All neighboring countries have sovereign equality. Along with sovereignty comes bigger responsibility. Two sovereign countries need to understand each other's strategic priorities and concerns,” he further said.

Addressing the inaugural session of the Summit as chief guest, Chairman of Nepal Communist Party (NCP) Pushpa Kamal Dahal said that Nepal and India can have excellent bilateral relations only if both respected each other in line with the principle of sovereign equality. He said that since both the countries have pursued a policy of giving priority to neighboring countries, the relations between Nepal and India can be expected to grow better in the days ahead.