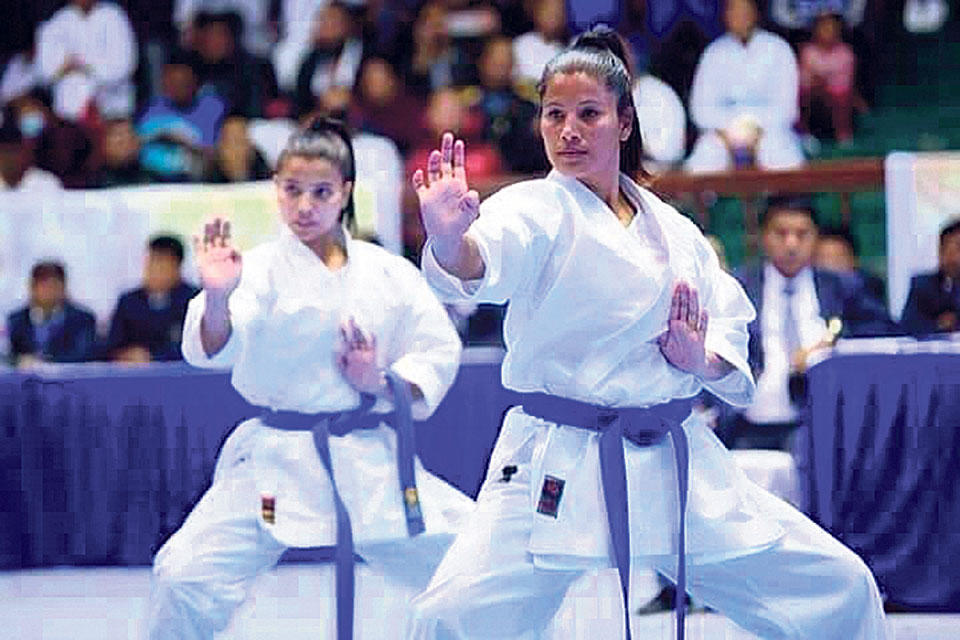 KATHMANDU, Dec 8: Bir Bahadur Mahara, who won a gold medal for Nepal, defeating  Pakistan’s Muhamad Faheem in Taekwondo in the ongoing South Asian Games (SAG), would probably be sweating it out  in the searing heat of some Gulf country now had he not joined the Nepal Police six years ago. Or he would have ended up like his elder brother, toiling away as a laborer in  some Indian town.

Born   in a peasant family 23 years ago in Raikawar village of Kanchanpur district, Bir Bahadur found employment in the police just when his family needed the money. And his association with the police not only provided him a regular income but also a platform for honing his sports skills. “It was  luck that I could join the security forces and also take up sports: other wise I would be  in Qatar or Malaysia or maybe in India just like my brother. Engaging in sports like this would have been only wishful thinking,”he said.

And for Bishnu Katuwal, a national badminton player who has claimed a bronze in  SAF, he would have had to just forget  about ‘this expensive game’ had he not been a member of the police force.

Untike karate or twekando ‘for which you need only a few sets of dress for practices’, badminton is financially very demanding. Someone from a poor family cannot afford to practice to the fullest, he feels.

The 35-year-old  head constable is firmly of the opinion that ‘sports with all its variety will remain alive in this country only till such time as the police or army give sports persons a break.’

“These sports will remain alive, even if not exactly thriving,  at least as long as the security forces help out. I get a regular salary of Rs 30,000 and then there are the sports facilities. Otherwise, I would be under family pressure to earn a living rather than do sports,” he stated.

Out of the  43 SAF gold medals bagged by Nepal as of Saturday, 32 were won by those associated with the security forces. Out of the  594 Nepalis competing in SAF, over 50 percent are from the security forces. Altogether 180 sports persons from the Nepal Army, 97 from the Armed Police Force  and 90 from Nepal Police  are competing in different categories including track and field, martial arts and athletics.

Men and women of the Nepal Police have grabbed 14 gold, those  of Nepal Army 12  and Armed Police Force personnel 6 as of  the time of writing this. Although the security forces are  contributing so much to sports, they are not provided a separate budget for this.

The spokespersons of these forces maintain that it is both their ‘responsibility and pleasure’ to contribute to national sports and  they have had this culture since long back. But the sports persons themselves  feel that a separate platform would have been more welcoming.

If you to qualify for the security force, you can use that platform, but if you fail, your prospects in the field almost end there  unless someone else is ready to support or sponsor you, notes Katuwal, the badminton bronze medalist. “And making it into the police or army is often a matter of luck,” he adds.

Although she was already in the Nepal Army, Tulasa Khatri, a national player, flew off to Qatar for better opportunities because of financial issues in her family just ahead of SAG. This shows how precarious things can get and how much more remains to be done for strengthening sports in Nepal and empowering sportsperson. Nepal Sports Council says ‘it is trying its best to grow professionalism in all sports and thus secure the future of sportspersons as a whole.

“In the army and police, the sportspersons feel secure. They have no financial stress. It is not the same for others, it’s not that easy,” Member Secretary at Sports Council Ramesh Silwal. “But for sports like cricket, football or even volleyball it is still okay. We indeed need to grow professionalism in all kinds of sports,” he said, adding that the sports council is working in that direction.

Sports Minister Jagat Bishwokarma, who informed that the total SAG budget is Rs 4 billion  ‘but expenses might be less than that’ due to ‘extreme carefulness’, stated that the country has invested enormously  to prepare for the ongoing events.  “We do realize that we have not been able to foster an attractive environment in the field of sports, especially for freelancers,” he said.

KATHMANDU, Nov 24: The 1999 South Asian Games (SAG) was a historic year for Nepali sports when the host nation... Read More...

KP Oli sworn in again as PM, no new faces in new cabinet
8 hours ago