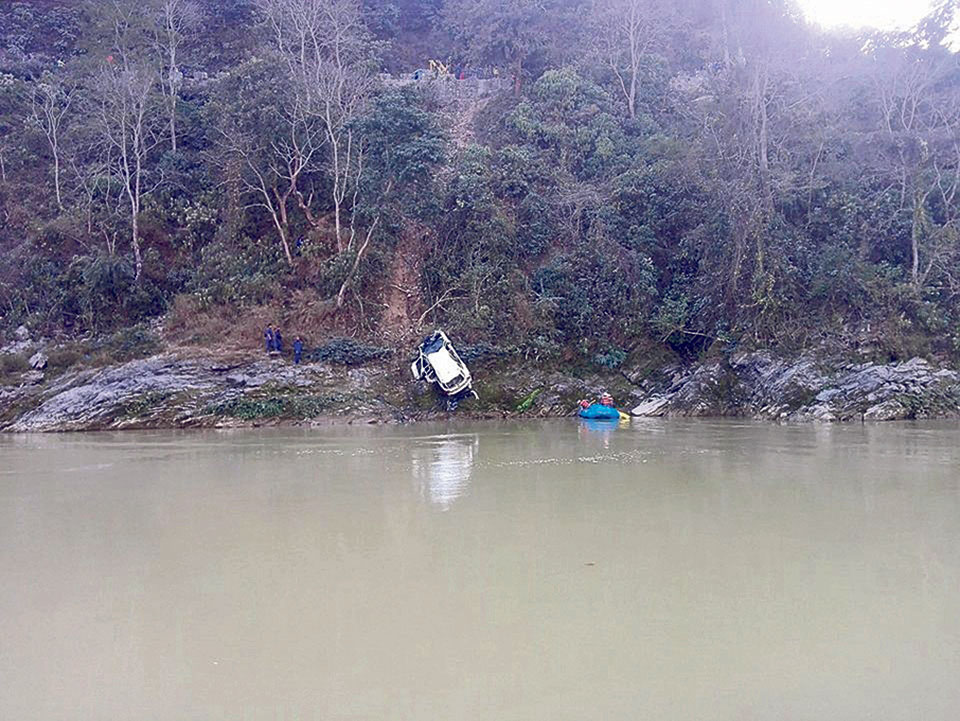 Rescuers trying to recover the bodies of passengers killed in a road accident in Dhading on Saturday morning. Photo: Sarita Shrestha/Republica

DHADING, Feb 11: Secretary at the Ministry of Irrigation, Ramananda Prasad Yadav, was killed in a jeep accident in the wee hours of Saturday while returning to Kathmandu from Kapilvastu district. The accident also claimed the lives of two others, including his son.

The accident took place at Salanghat of Benighat Rorang Rural Municipality-4 in Dhading along the Prithivi Highway. Secretary Yadav was travelling with his twenty-two-year-old son Santosh, a friend’s daughter Unnati Gupta, 15, and driver Niranjan Yadav in the jeep with registration number Ba 2 Jha 3140. The ill-fated jeep, which had left Kapilvastu on Friday evening, skidded off the road and plunged into the Trishuli River early in the morning, informed the local police.

The jeep’s driver is the sole survivor of the crash. He is undergoing treatment at Bir Hospital’s Trauma Center in Kathmandu, according to Inspector Sanjay Timilsina of Khanikhola Area Police Office.

The body of Secretary Yadav and Unnati Gupta have been recovered from the accident site while Yadav’s son is presumed to be dead but his body is yet to be recovered as of Saturday evening.

A team of Armed Police Force divers from Gotakhor reached the accident site to search for the bodies after being reported about the incident. Head Constable Narendra Singh Bhandari recovered the secretary’s body from inside the jeep as he was wearing seat belt.

After recovering Yadav’s body, Head Constable Bhandari and another diver Tara Nath Chapagain again jumped into the river to recover Unnati’s body. After five minutes of search, Chapagain got drowned in the river and was luckily rescued by Bhandari.

Secretary Yadav’s daughter Dr Ranjana Yadav arrived at the incident site by then. Forgetting the sorrow of losing her father and brother, she provided police constable Chapagain, who was in an unconscious state, with preliminary treatment. Chapagain was then taken to a community hospital in Malekhu and then airlifted to Kathmandu for further treatment.

Yadav's body recovered after a week

KATHMANDU, Feb 16: Australian Marine Police, who were looking for Nepali youth Sudeep Uprety who had gone missing into the... Read More...