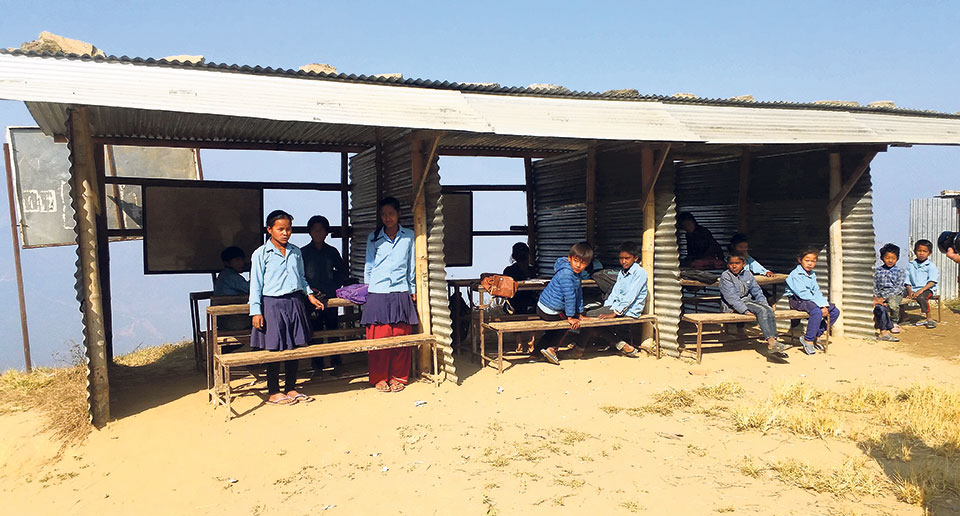 Students of Shilasita Basic School have been studying under tin roof since the 2015 earthquake. Photo: Bhagwati Lama/Republica

NUWAKOT, Nov 25: The students of an earthquake-ravaged school in Nuwakot have been braving the unforgiving cold of winter, the scorching heat of summer and the torrential rainfall of monsoon.

They have been compelled to study under tin shades since the last three years after the catastrophic earthquake of 2015 destroyed the building of Shilasita Basic School, Belkotgadhi Municipality-9, of Nuwakot.

This school runs classes up to grade five. As the growing cold has started taking its toll, Sajana Lama, a fifth grader, said, "We don't just have to deal with the extreme weather but we also have to tolerate the disturbance from other classes."

She expressed her desire to study in concrete classroom as soon as possible. Established in 1994, this school has 59 students at present.

Earlier, this school had two buildings and six rooms. But now, students are obliged to study under a tin-roofed hut. Manisha Nepali, another fifth grader, has to come to attend the classes against her will.

"We often request our teachers not to teach us in such classes. But they say that our new school building is under construction," said Nepali, adding, "We are tired of waiting for our school building to be ready."

A lot of schools which were flattened by the earthquake have already been reconstructed and this disappoints them more. Dilman Singh Lama, principal of the school, laments that all the classes are disturbed as there is no proper separation between the classes.

"Despite our will to provide quality education, we have not been able to do so in lack of school building," said Principal Lama.

"We had signed the contract on April 9, 2017 but the contractor is yet to construct the building," said Principal Lama. Labor crunch and lack of construction material are reportedly the reason behind the delay.

As per the agreement, the project should have been completed by fiscal year 2017/18 but so far, only 30% of the work has been completed. Birendra Jung Thapa, chief of the DPIU informed that schools not completing the construction on given deadline are under scrutiny.

Monsoon trough moves back to Nepal, rain forecast for next three days

KATHMANDU, July 22: Moderate to heavy rain has been forecast throughout the country for the next three days as monsoon... Read More...

Chepangs take recourse to fire to ward off cold

CHITWAN, Jan 3: The Chepang people living on the hill adjacent to Sauraha are economically so poor that they spend... Read More...

Summer heat dries up wells, the only source of drinking water

GAUSHALA, May 8: More than 50 wells in Bharaptur of Mahottari have dried up creating a drinking water crisis in... Read More...