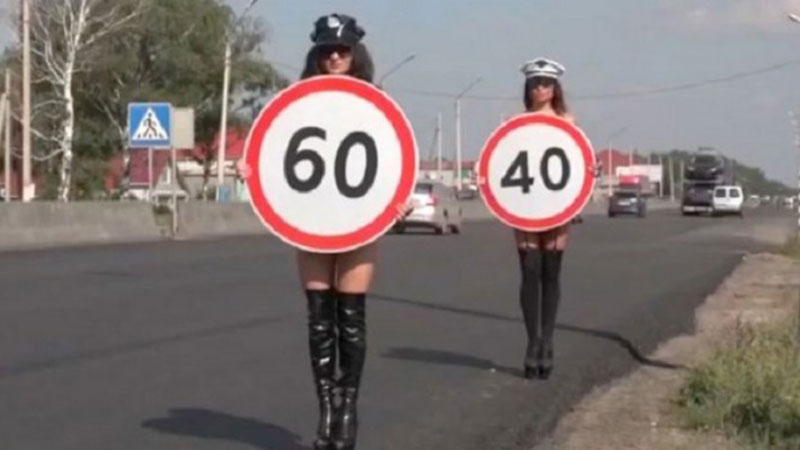 MOSCOW, Sept 7: Topless models have been sent onto the streets of Russia in an attempt to slow down speeding drivers.

The bizarre idea has been launched by a Russian road safety campaign in an effort to reduce the 30,000-a-year deaths on Russia's roads, says the Daily Mirror.

The "female road safety assistants", dressed only in boots and knickers, hold large speed signs over their chest while walking down the roads on Russia's Novaya Zemlya island.

A spokesman for the campaign, entitled Avtodrizhenia, which staged the trial, said that "most speeding drivers, the majority of whom happened to be men, slowed down to admire the female road safety assistants".

There were also no reported accidents due to distracted driving, the campaign added.

The experiment was first trialled in 2013 and has been revived as part of a new national debate on reducing deaths on Russia's roads, says the Daily Mail.

The idea has won some unlikely support, with the area's elderly population telling reporters that they were happy the speed was being enforced as they were terrified for their lives when crossing the road.

"Drivers do not let us cross. Some of them do, but many others just fly past. They even shout at us – 'why are you walking here?' Can you believe it?" said one female pensioner.

One of the models who stripped off for the experiment said: "Our drivers usually do not slow down when they pass a village or a settlement even though there are speed limit signs by the road. So we have to make them do it."

Infographics: Will the World Cup in Russia be safe for visitors?

Ever since Russia was announced as the host of the 2018 FIFA World Cup, there have been fears about safety... Read More...

Even the eyelashes freeze: Russia sees minus 67 degrees Celsius

PLYMOUTH, Mich. (AP) — Amanda Kessel rediscovered just how good it feels to score a goal for your country. ... Read More...