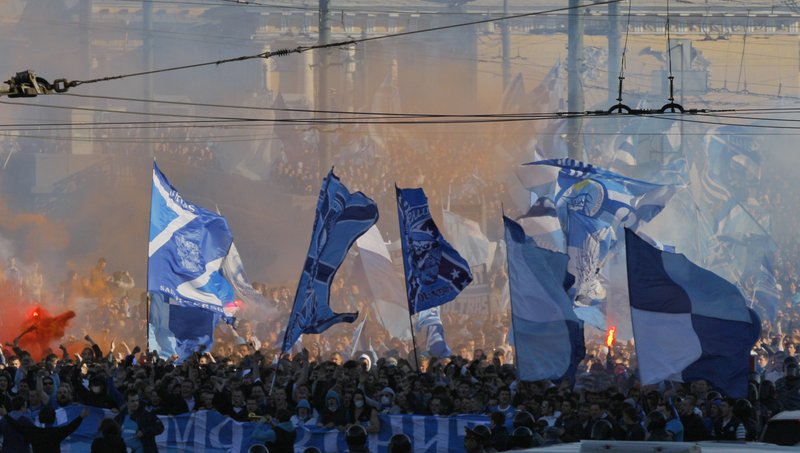 There were 89 racist and far-right incidents at Russian games in the 2016-17 season, slightly below the two previous seasons, according to Thursday’s report by European anti-discrimination group FARE and Russia-based SOVA.

In one case, an African player complained of racist abuse by an opponent during a Russian Premier League game. In another case, a hardline fan group segregated part of a stadium for people of “Slavic appearance,” the report alleges. Fans of Russian champion Spartak Moscow flew anti-Semitic banners.

The Russian Football Union’s disciplinary committee, however, has said it didn’t detect a single racist incident in any of the top three divisions this season.

“The Russian football authorities and the government authorities have realized ... the way both of these competitions will be tarnished by the fear of racism occurring and they’ve taken some quite strong measures,” FARE’s executive director Piara Powar told The Associated Press in a telephone interview. “There still remains the danger of some isolated incidents taking place.”

Russian authorities have taken measures to blacklist at least 191 fans from attending sports events, while the RFU ejected an influential fan leader, Alexander Shprygin, from its organization. He was deported twice from France last year following violence around Russia’s match with England at the European Championship, and has been accused of posting far-right symbols on social media, a charge he denied.

Shprygin was dragged out of a bathroom at an RFU conference in September by police and detained, reportedly in connection with an investigation into fan violence.

FARE says Russia has made some progress, and that it didn’t observe monkey chants or openly Nazi flags in any top-flight games this season. However, it warns far-right fans instead fly banners with concealed messages such as runes and number codes used by Nazi and ultranationalist groups.

The RFU punished two clubs in the 2015-16 season for such banners, but didn’t pursue any such cases this season — something which Powar says indicates it may be “turning a blind eye.”

That was despite cases of anti-Semitic banners being flown by Spartak fans, including taunts aimed at rival CSKA Moscow, whose club president and then-coach are both Jewish. Another Spartak banner showed a Russian rock singer caricaturized as an Orthodox Jew, accompanied by personal abuse.

FARE says the number of violent racist incidents fell from five to two last season compared to the year before. There was also no repeat of large-scale violent attacks on foreign fans, such as those which took place between Russian and English fans in Marseille a year ago during the European Championship.

However, there are indications that football-related violence between different ethnic groups in Russia is becoming more entrenched, with fans from Russia’s largely Muslim regions in the North Caucasus forming “fan groups which adopt football hooligans’ rules and initiate fights with Moscow teams.”

In another case last month at a playoff game for a place in the Russian Premier League, one fan group from the Yenisei Krasnoyarsk team issued a statement on social media saying that its sector of the stadium was only available to fans of “Slavic appearance.”

A member of the group, Artyom Kirillov, suggested the group had been misunderstood. “A lot was made up” in local media reports of the incident, he told the AP. “We are loyal to all Russian citizens.”

FIFA said Wednesday that Confederations Cup games will use a three-stage process in the event of fan racism. Referees will first request a public announcement, then suspend the game if the behavior doesn’t stop. If racist incidents still persist, they can stop the game.